On Thursday, the New York Times dared to ask a question that has been plaguing moms for years: what do you do when your children's artistic output outgrows the surface area of the refrigerator? "We're not going to build an addition on the back for every piece of crayon art they've ever done," one parent sighed. But reporter Michael Tortorello and the frustrated parents he interviewed forget that for a lucky few, those crayon artworks could end up paying for that new addition.

In the last decade, paintings by child art prodigies have commanded upwards of $25,000 at auction -- and loads of media attention. Art historians will remember that these precocious painters aren't an exclusively 21st century phenomenon: Pablo Picasso showed unusual promise at the age of 8 with his bullfighter painting "Picador," while Dürer crafted a strikingly precise silverpoint self-portrait at 13. The great early Renaissance painter Giotto, Vasari recounts, was discovered at a similarly tender age after the Florentine painter Cimabue caught him drawing pictures of sheep on a rock.

In an effort to scout out today's great-artists-to-be, ARTINFO surveyed young talents who have recently attracted attention -- and even collectors -- as a result of their art. Here, below, are four up-and-comers, most of whom favor brash brushstrokes and a rich palette reminiscent of the Abstract Expressionists, and who give new meaning to the term "fresh-faced." (And check out a photo gallery of some of their work!) 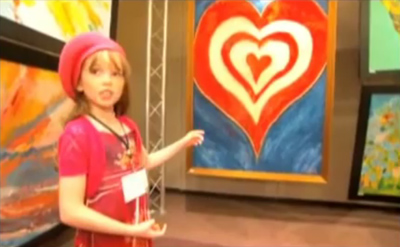 Perhaps the most established pint-sized artist, the Norfolk-England native sold out his 2009 sophomore exhibition in 14 minutes. A family friend discovered the seven-year-old's talent three years ago. Now, his paintings cost upwards of $1,225 apiece and have acquired waiting lists of almost 700 people. Williamson's specialty is delicate watercolor and pastel landscapes, which might explain his admiration for Monet. But like any burgeoning artist, he's wary of comparisons. "I know who Picasso is," he told a Guardian reporter in a lengthy profile last year. "I don't want to become Picasso."

In April, oil painter Autumn de Forest became the youngest artist ever admitted to the Boulder City Fine Arts festival. She was eight. Autumn, who favors bright, all-over compositions, has been compared to Wassily Kandinsky and early Jackson Pollock. Like the drip painter, de Forest works with her canvas laid horizontally on the floor -- though her motivation is more logistical than theoretical. "Because painting vertically would pose difficulty in reaching areas of the canvas, de Forest lays the painting on the ground and moves around it," the "About Me" section of her Web site explains. Today nine years old, de Forest may need to put some of the $250,000 she's reportedly earned in auction sales toward a site update. Currently, her work available online comes from only two periods: "Age Six" and "Age Seven."

Some might recognize Olmstead from the 2007 documentary "My Kid Could Paint That," which chronicled the controversy surrounding the artist, who's now 11. Olmstead first garnered attention (and a New York Times profile) for her abstract expressionist style canvases at age four. Within a year, her work was selling for tens of thousands of dollars. But like the great Dutch forger Han van Meegeren, who tried to pass his paintings off as Vermeers, someone else might be the true creator of Marla's canvases. Documentary director Amir Bar-Lev never succeeded in capturing the tot painting one of her works from start to finish -- though he did catch her frequently asking her father for help.

Now grown beyond her precocious glory days, at 26, Alexandra Nechita had already acquired a startlingly impressive résumé before she was allowed into R-rated movies. By age 12, the Romanian-born cubist painter and muralist had been commissioned to produce work for the 39th annual Grammy Awards, Polaroid's 50th anniversary, and the Andre Agassi Foundation. The recent graduate of UCLA's Fine Arts Program also racked up a formidable number of television appearances before entering high school, including the Oprah Winfrey show and a guest spot (as herself) on "Boy Meets World." In the episode, titled "Better than Your Average Cory," Nechita causes Cory to develop an inferiority complex and blame his lack of skills on his average-guy father.

Photo Gallery: From the Palettes of Babes: Four Prodigious Child Artists to Watch

More of Today's News from ARTINFO:
Kenny Scharf's Vandalized Mural Gets Touched Up With a Bodyguard and Surveillance Cameras
Mummies Are Beheaded and Museums Ransacked Amid Egypt's Revolutionary Chaos
"Clough Must Go": Protesters Mass in D.C. as Smithsonian Regents Meet
A Luminous Titian Set a Holy-Rolling Record at Sotheby's $91 Million Old Masters Sale