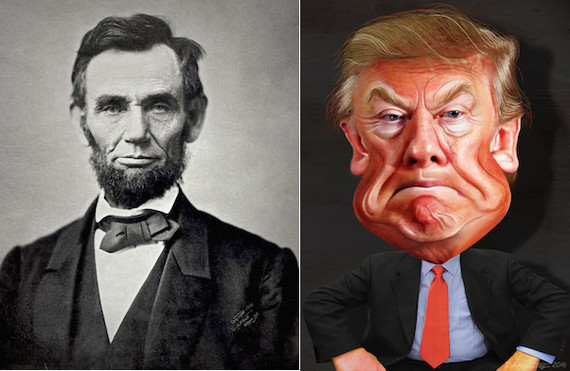 (Lincoln photo by A. Gardner, 1863. Trump caricature by DonkeyHotey, available under Creative Commons license through flickr.)

There's poetic justice in Trump's rise to the top of the GOP presidential field. The GOP is reaping precisely what it has sown.

One might indulge in Schadenfreude if the stakes weren't so high. America teeters on the brink of fascism, and no one can confidently predict which way the chips will fall.

Trump has essentially effected a "hostile takeover" of the Grand Old Party. How the GOP enabled Trump is the subject of Time's March 21 feature story "The Party's Over." The article -- by Peter Wehner, senior fellow at the conservative Ethics and Public Policy Center -- is surprisingly candid, given that Wehner is a consummate insider, having served in each of the past three Republican Administrations.

Here are his major points:

Wehner is dead-on about what he acknowledges, but he omits the uglier aspects of the GOP's transformation from the Party of Lincoln into the Party of Trump. Here are two.

No institution has done more damage to America than Fox News. In an article titled "How Fox News Changed American Media and Political Dynamics," former GOP congressional aid and Reagan/Bush administrator Bruce Bartlett offers a blistering litany of Fox's pernicious influences. The extraordinarily well-researched article deserves to be read in its entirety and can be found at Social Science Electronic Publishing, Inc. (See "Top Papers.")

In brief, Fox News is misnamed. It "long ago ceased being anything remotely kin to an objective news source and now functions as a propaganda arm of the Republican Party," with ultra-right-wing conservative Roger Ailes as de facto Minister of Propaganda.

Because of Fox's routine disregard for factual integrity and its anti-intellectual and anti-science biases, Fox viewers are demonstrably ill-informed or misinformed on a whole host of topics, from the war in Iraq to climate change. Indeed, it would seem Fox News exists solely to keep hard-core conservatives perpetually riled-up and angry. In Bartlett's words "it's about having a chip on your shoulder; it's about us versus them, insiders versus outsiders, phonies versus non-phonies."

In short, Fox has tilled the soil for Trump's demagoguery.

The GOP has further debased itself and the nation by decades of race-baiting. It began -- following the civil-rights advances in the 1960s -- with Goldwater's and Nixon's "Southern Strategy," the cultivation of racial polarization to reclaim the democratic South for the GOP.

The tactics worked, and Ronald Reagan followed suit. To kick off his presidential bid in 1980, Reagan strategically chose both his message and his venue, delivering a "state's-rights" speech in Philadelphia, Mississippi, a town notorious for the KKK fire-bombing of a black church in 1964 and the subsequent murders of three civil-rights activists. Thousands cheered him.

The deep South is now solidly red, but it's cost the GOP its soul. Dog-whistle racism in America has escalated to police-whistle racism. Enter Trump to further fan the flames.

Trump is unfit to govern. Clinical psychologist Gregg Henriques pulls no punches in his assessment in Psychology Today of Trump's character defects:

Trump is completely chaotic at the level of ideology. He is a pathological liar and has no intellectual integrity. He offers virtually no policies, and the ones he does offer are impossible and mean-spirited. He is a narcissist . . . easily manipulated by feeding his ego (see, e.g., Putin's comments on Trump) and highly hostile to those who challenge him. In his speeches, he encourages violence, racism, riots, and demagoguery. He is best known as a Twitter bully. . . . He has repeatedly cheated on his wives. . . . [There] is no indication that he has the temperament to guide a polarized government through complicated times, nor reassure a public that is restless and feeling increasingly . . . uncertain . . .

And yet, given the perfect storm of dysfunctional government and cynical electorate, the unthinkable may be possible. Henriques cautions: "the likelihood that a Trump presidency would be a disaster with potentially catastrophic consequences is essentially undeniable."

If it is true that "Whatever a man sows, this will he also reap," then the GOP is reaping the whirlwind for a half century of political expedience and malfeasance. If Trump is elected, the country and the world must also endure that whirlwind.