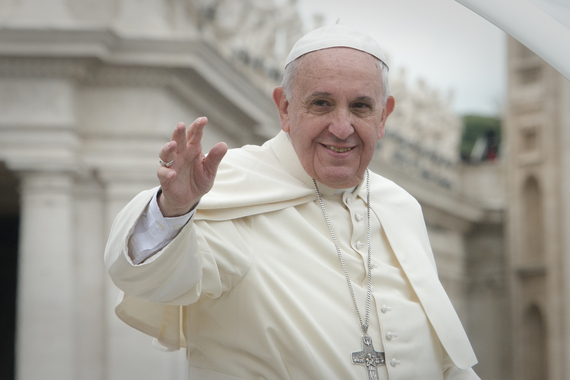 From the pope's historic visit to the U.S., to China's commitment to cap its carbon pollution, to corporate commitments to clean energy, it's been an inspiring week for climate action. The string of milestones we've seen over the course of days--some tangible, some symbolic--is part of what gives us hope that in Paris, and beyond, world leaders can come together on a international plan to slow global warming.

Hillary Clinton comes out against Keystone XL. Prior to her big reveal against Keystone on Tuesday, it's not as if the Democratic front-runner for the presidential nomination had no environmental bona fides. She'd already come out against drilling in the Artic. She'd issued an ambitious plan to increase solar power by 700 percent in the next six years. But the former Secretary of State was also originally "inclined" to support Keystone, and had remained forcefully mum in on it during her campaign.

Climate activists, however, organized mightily to make the approval of the pipeline a defining national issue, while scientific evidence mounted against burning more fossil fuels. Keystone specifically, the State Department said, would create additional pollution equal to adding 5.7 million cars to our roads.

Secretary Clinton's stated position against Keystone is more than a symbolic win for grassroots organizing or an indication of the political winds. It also adds to the pressure on President Obama to reject the dirty pipeline once and for all.

Fortune 500 companies pledge to go 100 percent green. This announcement flew a bit under the radar: Nine major companies -- including Nike, Goldman Sachs, and Walmart -- pledged to get 100 percent of their energy from clean, renewable sources, bringing the total number of leading companies who've done so to 36. The companies join three American cities and the entire state of Hawaii in adopting goals to be entirely powered by clean sources like wind and solar.

These institutional pledges will cut climate-warming pollution; even more important, they show that political leaders and business leaders are willing and ready to make the ultimate transition to 100 clean energy that scientists say is necessary and possible to avert climate catastrophe.

Follow Francis. The pope was widely expected to double down on his call for aggressive action to curb global warming pollution during his U.S. visit, and he did not disappoint. Speaking at the White House, he seemed to endorse the Obama administration's carbon pollution limits on power plants, telling the president it was "encouraging that you are proposing an initiative for reducing air pollution." In his address to joint Congress, he reasserted the need for a "courageous and responsible effort" on climate, and told members, "I am convinced that we can make a difference and I have no doubt that the United States - and this Congress - have an important role to play." Speaking to the United Nations, he declared a "right of the environment," saying, "any harm done to the environment.. is harm done to humanity."

The pope's message is resonating. Last week a collection of House Republicans bucked their party leaders by offering a resolution acknowledging the problem of climate change and the need to solve it. A new poll showed broad support for the pope's call to act on climate across age and religious lines. As Environment America's Anna Aurilio said in a statement earlier this week, "the pope is beginning to rally public opinion in a way that politicians can no longer ignore."

The China Announcement: a perfect capstone. In a perfect culmination of the week's news, China announced it would place limits on carbon emissions from three major sectors on its economy by 2017, transforming its energy system and implementing the largest cap-and-trade system in the world. The world's largest global warming polluter also pledged $3 billion to help poorer countries develop cleaner, low-carbon economies.

Contrary to the latest talking points from presidential candidates, congressional leaders, and others taking their cues from the polluters and climate deniers; this week has shown the task of slowing global warming to be achievable and widely supported -- by faith leaders, business leaders, and international leaders of all stripes.

Ideally, every one of our political leaders would heed the call to enact global warming solutions. But increasingly it seems that those who seek to block climate action will be mere footnotes in history. If this week is any indication, the fossil fuel interests and the politicians who answer to them will be passed by as the rest of the world marches toward bold measures to stem the climate crisis.