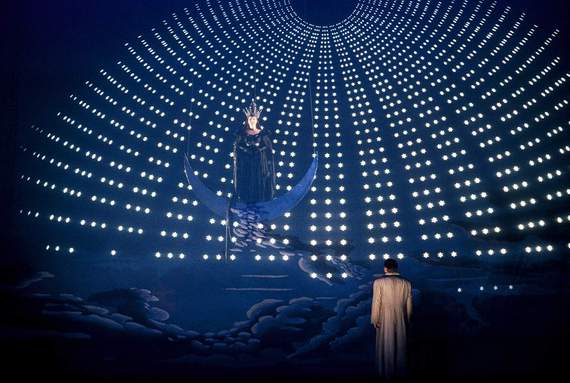 In an era when opera's standard repertory has coalesced around a few famous composers -- Verdi, Puccini, Mozart, Wagner, and a handful of others -- it is the stage productions that differentiate one Traviata or Boheme or Carmen from another. Name directors like Robert Wilson, Peter Sellars or Francesca Zambello top theater marquees in new and old works, each with his or her own signature style. Yet far less is known by the public of the art of stagecraft and how it has evolved over time than of the works and vocal stars of opera.

The current emphasis on staging is what makes important and timely the arrival of Evan Baker's new single-volume survey of four centuries of European opera production: From the Score to the Stage: An Illustrated History of Continental Opera Production and Staging (University of Chicago Press, 2013). 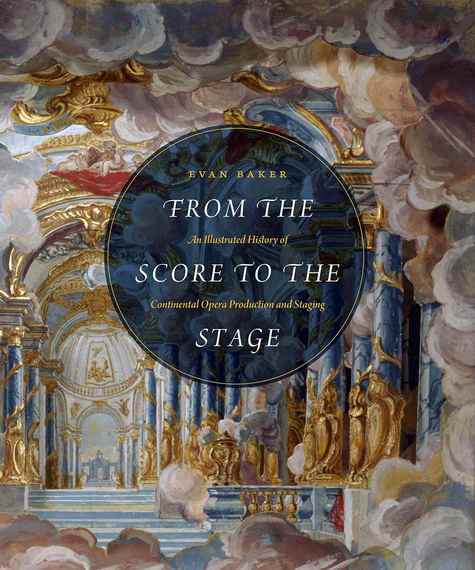 In this large, richly illustrated book (pictured above), written in lucid and accessible prose, Baker, a former dramaturge and stage director himself, lifts the veil from behind the scenes of opera. He traces the long journey of stage production from the genre's origins in seventeenth century Italy, where arias strung together to tell a story were melded into the grand public events of ducal courts, to the lavish nineteenth century spectacles of the Paris Opéra, and on to the next century's pared down post-war abstractions. Baker wraps up the survey in 1976, when the most ambitious operatic project in history, Richard Wagner's Ring cycle, was given a celebrated modern staging by director Patrice Chéreau for the centennial of the work's premiere at Bayreuth. While Baker considers in his epilogue the current era of Regietheater ("director's theater" innovated in Germany), he leaves for another day the definitive study of its still evolving vogue.

From the Score to the Stage focuses on Continental Europe's three most important operatic traditions: those of Italy, France and Austria/Germany, with occasional reference to other European practices. Dividing his history into nine half-century chapters, Baker captures the flow of artistic and technical advances as they criss-crossed Europe. The introduction of gas lighting in 1822, for instance, heightened staging possibilities everywhere, making obsolescent the spare luminescence of candlelight. The electronic age further liberated light as a tool for emotional expression; suddenly, tinted hues could precisely and subtly project heightened psychological states. 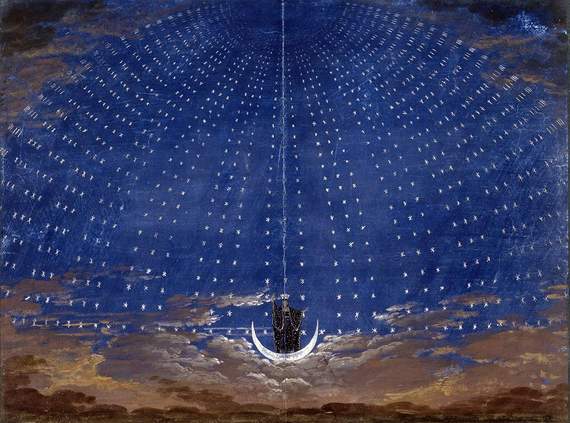 (The illustration immediately above is an 1815 design by Karl Friedrich Schinkel for a production of Die Zauberflöte about two decades after the work's premiere. A modern version of the production, revived in Berlin twenty years ago, is pictured at the top of the page.)

Stage innovations add novelty to opera productions. The reader will discover how the brothers Galliari incorporated "practicals" (three-dimensional elements like steps and stairs) in mythological settings; how trap doors were used in Meyerbeer's Robert Le Diable and later Gounod's Faust for fantastical effects, and how the stage of Alban Berg's Wozzeck matched its shocking music with expressionistic sets and lighting. Baker's own translations from German, French and Italian texts help clarify obscure meanings from source material for the stories. 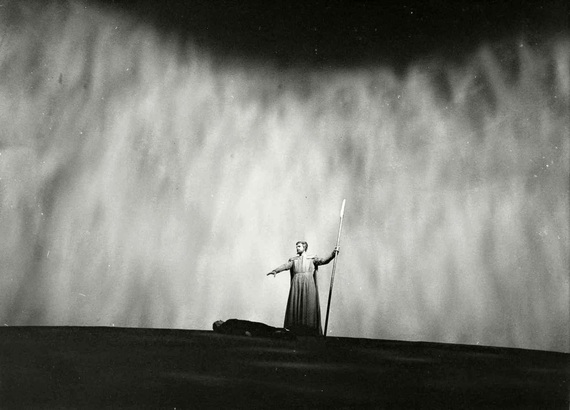 One of the author's most interesting chapters deals with management at the Bayreuth Festspielhaus after the Second World War. During this period of austerity, Wieland Wagner (Richard's grandson) had taken over production and made a controversial decision to pare down traditional stage sets in favor of abstract lighting schemes (Die Walküre is pictured above). Audiences were initially shocked. Baker:

Wieland Wagner's visual aesthetics and psychological ideas influenced opera staging styles throughout Germany. His new style, now known as Neu-Bayreuth, signaled a complete break with the past. Wieland's interpretations provoked the audience into thinking for itself about the scenic and dramatic situations unfolding on the stage. His aesthetics required only minimal scenery and lighting as integral parts of his productions. His blocking of the singers freed them from the old idea that specific instances in the music dictated their movement, and stars who could not act had no place in his productions.

Anyone associated with the production and planning of opera, not to mention also audiences and students of theater and cinema, will want to own From the Score to the Stage, which, for its comprehensive scope and sheer panache, has no competitor. Whether read cover to cover or used as an easy-to-navigate reference on particular topics, it is the indispensable single-source guide to the opera stage.

Rodney Punt can be contacted at Rodney@ArtsPacifica.net.