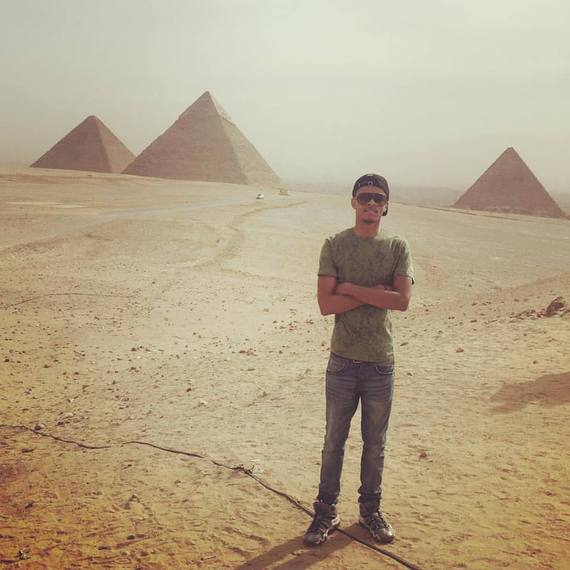 We spend our whole lives searching for wealth or the satisfaction it brings but Kyle Johnson has found the key. 8 years ago he wouldn't have envisioned that his very own creations would be front and center at a boutique in Baltimore, "I'm very happy that my clothes are in Winkel boutique now. I'm even more happy that the boutique is in Fells Point; an expensive and upper class area of Baltimore where most of the homes are worth millions"he says. Kyle's beginnings didn't start in a privileged area like Fells Point, a child of divorced parents, he found it hard at times to find the right path. After just a year in college, Kyle made the tough decision of leaving Hampton University to pursue his dreams, "The hardest part for me though is figuring out what to do and what not to do, or how to avoid mistakes if possible" he says. At the age of 21, Kyle is already a young entrepreneur in his city. This is unheard of as Baltimore usually gives black males two options in careers, rapper or athlete. Kyle chose neither, deciding to forge his own path as an entrepreneur, "I never understood why young black boys could only dream of being a professional sports player or a rapper when they could aspire to be so much more than that" he says. It wasn't always easy as he didn't grow up privileged nor wealthy. He began his own clothing line at 13 years-old called Wealth and Abundance; an ode to the life he wish he had growing up, "I have always had a entrepreneurial spirit" he says.

Kyle initially began designing clothes because his mother couldn't afford new clothes for him. He was propelled by the mini-fashion shows his classmates would have,"There was a main lobby where everyone would try their best to stop and show off their outfit and that's where the upperclassmen or whoever was cool would hang out in between classes." Said Kyle,"Thinking about it now it was only like 5 minutes but it was the longest most exciting 5 minutes you could imagine. You couldn't wear the same thing twice if you wanted to be cool, or you at least had to mix it up and wear it differently but definitely not twice in the same week." For Kyle, getting new clothes wasn't as easy as just asking. "My mother didn't always have the means to buy the new Jordans or American Eagle shirts like my classmates would wear so I decided to take some of my shirts and paint designs on them so that I wouldn't stand out as the broke kid with the plain black tee on dress down day." He says.

His creative designs caught the eye of his classmates immediately, completely shocking him, "I had some dirty white Adidas All Stars at the time they were known as Shell Heads. I painted them with the colors red yellow and blue, I also made a shirt and hat to match the shoes. The shirt and hat both said "Lil KJ" which are my initials Kyle Johnson. My classmates all asked me who made it and once they knew it was me they asked could I paint on their shoes or make them a shirt". His love of art is what helped him create his designs, at a young age his parents saw a very talented artist but didn't see anything more, "My parents didn't necessarily encourage me becoming an artist or anything but they also didn't really encourage me to be much in particular. I kind of was just told that I had to be something or at least get a job to make my way in this world" he says. He knew that he had to make a way. So he began his own clothing line Wealth and Abundance in 9th grade." I was riding in the car one day after school with my uncle. I was telling him about my dreams and what I wanted to do in life. I told him about all the cars that I would like to one day own and all the homes around the world I would like to be able to have" says Kyle, "so I told him that I wanted to make a lot of money in order to attain those things. He told me something that I'll never ever forget and something that led to the birth of my brand. he said "you don't want the money, you want the things that you can buy with money." Those pieces of paper hold no true value."

Wealth and Abundance was not the first choice in name, "I went through a few names like Phunky Phresh Millionaires, Invasion Wears, and a few others that I cant remember at the moment" he laughs. Coming from a background that wasn't privileged, Kyle had a dilemma. How would he fund his idea? His idea that sounded so outlandish. Previously he sold candy to get a little bit of money since his parents were not able to provide for him an allowance,"I went to Sam's Club with my grandmother and asked her to buy some fundraising candy boxes for me to sell. I promised her I would pay her back when I made the money the next day at school. She had faith in me and she bought it. The next day I paid her back, I believe I was a little short but she supported me and always has" he says, "I started making a few extra dollars every week,I would take that and go buy a shirt or a hat, something every now and then to add to my already limited wardrobe."

Funding a clothing line was out of the question for Kyle, he couldn't imagine where he would get the money. He hoped maybe his father would lend him some,"I told my dad about my idea in hopes that he would help to fund it. He seemed interested so one day he took me somewhere in DC to a print shop that he knew of. I showed the owner my designs and he began to give price quotes and told him that when i was ready that we would get it started" says Kyle, "So we go back to the car and my dad says "now you now how much it costs you just have to get the money" and im sitting in the back seat like WTF where am I supposed to get hundred of dollars to print some shirts that I dont even know if they will sell" says Kyle laughing,"I didnt actually say that i just kept quiet and tried to think of a plan". He never ended up making enough money to print the shirts so he used what he had and what he knew, "I never did get the couple hundred, but I kept selling candy and thought of a cool way to get the money. I ordered some pinback buttons at a good price and began to selling them for $1 and $2."

Kyle was overjoyed by the success of his new pins,"Now this was when I started making some real money, for my age at least. People would buy my Wealth & Abundance buttons and put them on their jean jackets and backpacks and people would steal them and they would have to come and buy another because they liked the designs and what it stood for" he says. From the sales of his buttons, he was able to get his first shirt printed but shortly after, the print shop got closed down. It left Kyle at a crossroads, took him a while to figure out where to go until he finally researched and found a solution,"I decided to order a screen printing kit and started printing shirts in my mom's kitchen. She didnt like this at all. I was always in her way, I left ink stains in the sink, I left shirts around to dry. I didn't mind getting yelled at because I was making these shirts and selling them for $20-$35 out of my locker at school" he laughs, "no other kid at my school was making this kind of money unless they had a job or they were selling weed. I became "thatwealthyguy" and started to create a lane for myself and for my brand."

Wealth and Abundance is where high fashion and the street meet. Kyle continually delivers high quality fashions with expensive textures such as Egyptian cotton--which he bought on his recent trip to Egypt. Yes, He traveled all the way to Egypt to deliver his clients with the best in material. The attention to the detail is what has catapulted his clienté base from former classmates to celebrities such as Benzino from Love and Hip Hop to T.I.'s Daughter. It's not hard to notice that many of Kyle's clients are black and so are his models. Seeing the beauty of Egypt and the pride Egyptians had has been an recurring inspiration for him to keep his business black focused,"We are at a point in history where black people have an opportunity to really bring any and every dream to reality at little to no cost at all" said Kyle "Just 50 years ago it was nearly impossible for a young black kid to start their own business, I have the potential to create one of the most influential brands that this country has ever saw" he says. of course his clients are as diverse as his clothes but he has a special pride for being black.

Now, he wears his clothing only; you can never miss the Wealth logo embroidered on his shirts. A Self promotion tactic that has proved itself to be successful. I recall a conversation I once had with him and I asked him,"Do you wear wear anything else besides W&A?" and he simply replied no sheepishly. An endearing dedication to the brand he has built from the ground up. As for the future of Wealth and Abundance? Kyle says that he's still hanging on the clouds but soon, the moon will be the limit,not the sky. "I see W&A producing the most intriguing wearable designs, inspiring the worlds future leaders to not only chase their dreams but to take that dream and actually bring it to reality." Now his clothes just aren't hot in the streets but also the showroom.