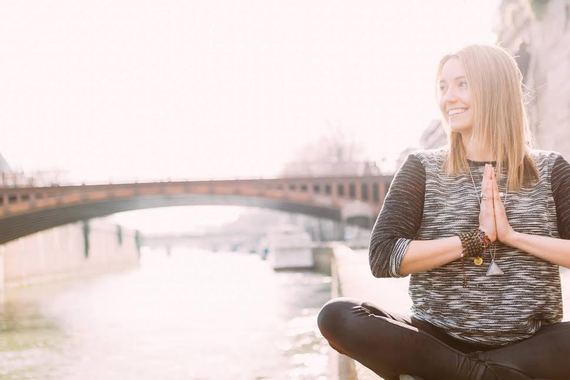 You may recognize Cassandra Bodzak from ABC's The Taste (she once fed Anthony Bourdain vegan cupcakes), or from Shape.com, where she teaches viewers how to make things like cucumber popsicles, and chia seed pudding.

I recently asked Bodzak, a New York-based healthy living and meditation guide, how she came to start her own business.

I found you by accident... one of those friend-of-a-friend situations, and I'm so interested in your story. Can you tell us a bit about yourself?

My journey starts with food.

I had lots of disordered behaviors, growing up, around food, and body image. I didn't have an eating disorder, but looking back on it, I wasn't exactly well.

In college I had these sudden, terrible stomach pains, and so I went to the doctor. They did all these tests on me, but couldn't figure out what was wrong. A nurse suggested sort of in passing that, "you know, maybe you should look into food allergies."

This was 2008. I was in college up in Connecticut. Food allergies weren't really on the radar then as they are today.

So I started researching, and went vegan, gluten-free, trying to figure out what was going on. It totally changed the way I looked at my body.

For the first time, I was more interested in taking care of my body instead of trying to change it, or make it go away, make it smaller.

I just wanted to heal it.

Within a few days of changing my diet, I felt different.

Within a few weeks, I was a different human being.

You started a blog in college.

It was really just a recipe-blog; me making healthy versions of my old favorites. I never imagined it would turn into something I would do for a living. I had no concept that people could even do something like this for a living. That was the blessing of it.

I moved to the City, to pursue acting. I was auditioning, and using the blog as my side, weekend-project.

Then, in 2012, I had a really big awakening. I like to call it my Eat Pray Love moment.

I had just gotten out of a serious relationship with a guy I thought I was going to marry. It was not a fun breakup, let's just say.

That same week, when I was already in this really tender place, I found out that my little brother was diagnosed with a terminal illness.

I collapsed that night, literally, on my shower floor.

I'd never felt like that before. I didn't know how I was supposed to live, knowing that someone I loved so much, who was younger than me, might not get a chance at life.

It was incredibly scary.

The next day, I woke up and it hit me that I needed to meditate.

Had you meditated before?

Not much, other than in yoga class. But I knew I had to do it. I started and, eventually, I found myself doing Kundalini yoga, which is very meditative. And that set me on the path I'm on now. It was my lifeline. It saved me.

It gave me peace of mind. It helped me approach my life with a kind of clarity and acceptance. I started to get myself back in the game. I began sharing it on the blog, because I felt like I had found this magical, superpower weapon, and how could I not share it with the world?

So the blog wasn't just about cookie recipes anymore.

It wasn't. I started getting bolder. I started pouring more of my heart into the blog. It was a haven for me, and also I got the feeling that I was helping others.

The blog started getting bigger. I had no intention of making money off it. It was more like therapy for me.

Then ABC found me.

Yes. They saw one of my cooking videos, and asked me to audition for a show, called The Taste, with Anthony Bourdain. I ended up getting on it.

That was another turning point.

At the same time, I enrolled at the Institute of Integrative Nutrition to become certified. I began to embrace the fact that all this just might be my calling in life.

I began thinking, 'you know, all this wouldn't be happening in my life if I wasn't meant to hold the space for it.'

Then I got serious about how I was here to help people live the healthiest, happiest life possible. I landed a book deal, eventually, and started speaking publically.

How do you stay grounded, given that you extend yourself to others so much? How do you remain centered on social media, for instance?

The people who follow me on social media know: some days you'll get three posts from me, and other times I won't post for a while.

And I'm sure if you're a marketing expert, you would wag your finger at that but for me, there are days I don't want to be plugged in.

It's those days that usually contain the bigger gems.

When I take time to be, to really just be, in my life, and experience it, and process whatever is going on around me, then I can share something that hits home with people.

So it's about taking time for yourself, in order to better serve others.

Yes. There's so much noise out there now, on social media especially. I take it as a big responsibility to only put stuff out that's going to be of service in some capacity.

I'm not just posting selfies, or random pictures, and that's what keeps my sanity.
Social media is an extension of my work, the good work I'm trying to put into the world.

What about the haters?

When I was on TV I got some crazy haters, and some next-level e-mails that were three pages long on why I was a terrible person and should die.

Because I'm not a strict vegan. My philosophy has always been: Do what's right for your body. I don't promote any one kind of diet. And a lot of people in the vegan community weren't too thrilled about that.

What did you learn from that experience?

Of course it was upsetting. But then you just have to send that person love. I had a few people who were stalking all my social media accounts, just to say mean things to me. You have to wonder what kind of place they're in to do that to someone else. You try to have compassion because they're the ones who need your love more than anyone else.

You're an angel, here among us mortals.

No, no. I'm not. When it's happening, you can get caught up. But then you sit back from it.

You learn to just let it go.

Cassandra will be hosting an online workshop tonight called "Accessing Your Intuition." Visit her online for more information.

Voting Made Easy
Register to vote and apply for an absentee ballot today
Register now
More:
yogahealthy livinglifestyleEating DisordersHealthy Eating
Newsletter Sign Up
The essential guide to taking care of your mind and body
Subscribe to HuffPost’s wellness email
Successfully Subscribed!
Wellness delivered to your inbox