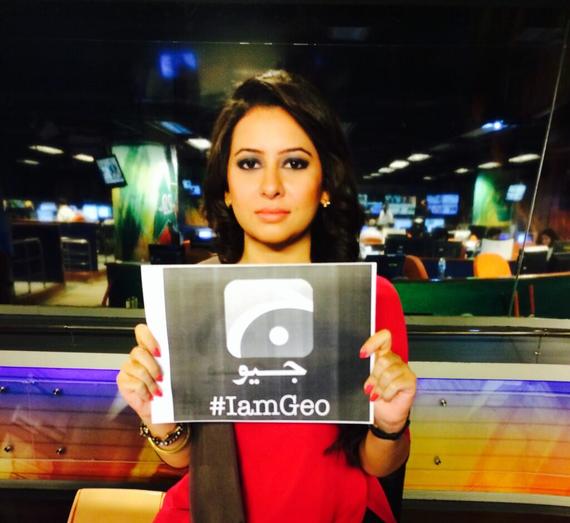 It seems idealistic, doesn't it? Like a sappy version of HBO's Newsroom (if it isn't sappy enough already). But there are some parts of the world, where you actually see a war, based on the intrinsic ideals and values of journalism, being fought and lost on television screens.

Freedom House, a think tank, publishes a report every year about freedom of the press around the world. In the 2014 report, released this month, it suggests that one out of seven people live in a country with a free press, the indicator for freedom signified on a bar chart with the color green. Pakistan stands at number 141, marked as "Not Free" marked by a light shade of the color purple.

The report came out sooner than it should have. Pakistan is about to plummet to "as free as North Korea."

Right now, as I write this blog, on a hot, humid Karachi night, I can't watch Geo News on my television. The channel has been taken off-air by my cable operator.

On April 19th, a prominent Geo News talk show host was shot six times and that's where it all started. After the event, Geo News was labeled as an organization which had committed treason and three private channels started a media trial against Geo News. They formed the "anti-geo-nexus."

After April 19th, every weeknight, at 10PM, I watch a channel called ARY News, which is part of this nexus. A current affairs program called Khara Sach, which translates to "Absolute Truth," is hosted by anchor who is an ardent and extreme critic of Geo News. Mubasher Lucman has made it his life's mission to bring down the channel and he's been at it for a few months now -- doing routine shows about alleged corruption by the owner of Geo News, Mir Shakeel-ur-Rehman.

Imagine this. Glenn Beck, (I apologize to Mr. Beck for the comparison) goes on air and for four to six months does his program on Rupert Murdoch. He talks about alleged corruption, personal gain and yellow journalism. He does this, unchecked for six months, without once taking these allegations to court. When Lucman started his media campaign against Rehman, Rehman issued multiple court notices but Lucman refused to appear before the court with his allegations. The court issued orders for him to stop doing programs on Rehman but Lucman refuses to do so. Currently, there are three warrants out for his arrest but he is yet to be arrested.

Even then, Lucman was largely ignored until Geo News became a traitor. Ignored because no one took him seriously. There were many programs where he would make allegations and then say, "...and blah blah blah," and made an actor-turned-comedian dress up as Rehman and discussed his personal life.

Treason allegations journalists can handle. The allegation has been used many times in Pakistan's history against journalists and famous politicians, some for speaking against military regimes.

Then Lucman accused Geo of blasphemy. And the accusation, like all accusations of blasphemy in Pakistan, spread like wild-fire. Soon, some religious leaders said the channel was sinful, working there was a sin, and watching it was a sin.

Blasphemy. The accusation in Pakistan has no redemption. It almost always guarantees death threats and in most cases, death itself. Recently, a lawyer Rashid Rehman was killed, reportedly because he was defending a man accused of blasphemy, 68 lawyers had blasphemy cases registered against them when they were protesting against the police and a 16 year old boy walked into a police station, impersonating a police officer, and shot a 65 year old man accused of blasphemy. A reporter for the Jang Group was recently sent a hand grenade in the mail, telling him to stop working at the organization. The message is clear. 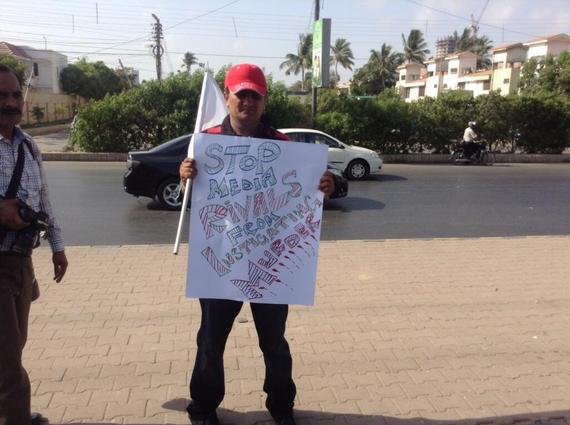 Today, Geo News is off-air in almost 95 per cent of the country, forcibly and illegally shut down by cable operators, while the government's Electronic Media Regulatory Board (PEMRA) is debating on shutting the channel down -- officially.

Today, Geo employees, and there are thousands of them across Pakistan, do not wear their identification cards. Reporters and cameramen are threatened and beaten and the news headquarters has become a fortress. Concrete slabs, barbed wire and police snipers man the gate to the office. Today, some news and program anchors from other news channels are cautious when covering the blasphemy allegations because they're scared. They know one wrong word and they can be accused of blasphemy. Some say they have already been "told" not to "take Geo News' side" in the issue or they might be next. So they are silent and cautious. Blasphemy allegations do that to you.

By the look of it, this is a war for control of the media. Time to get rid of the monopoly that's been held by one channel since free broadcast press came to Pakistan. Some say it's a personal vendetta -- personal battles between media owners, journalists and anchors -- battles that have led to a war with employees becoming collateral damage. It might also be for more insidious reasons.

From journalists, dedicated to the truth, the media has turned against each other accusing each other of corruption, treason, and blasphemy.

This is worse than North Korea.

Journalists, real journalists, take the oath. They aren't asked to, like doctors or the military. They take it voluntarily, not out loud but to themselves. They will give balance, they will be ethical and they will be truthful. Yellow journalism exists everywhere, in almost every journalistic institution. Geo News has its share of yellow reporters. Most analysts say that, in the past, some journalists that work for the Jang Group -- the umbrella organization for Geo News -- were the first to use traitor slurs against reputable people for their own personal agenda and that this is essentially reaping what you sow. Geo News has its share of yellow reporters as do other channels and print media outlets. But in the past, the white outranked the yellow. In the past, journalists were journalists. They would report stories with ethics and balance and they knew what people expected from them. This is no longer true. When journalists start accusing others of blasphemy, the color of the media changes.

Now the media is a deep, deep purple, reflecting shades of darkness, a silent oath broken as we watch Pakistan's media violently self-destruct.

More:
freedom of the pressPakistanJournalismprotestblasphemy
Trending