Here's a story that stands in stark contrast to Donald Trump's troubled depiction of undocumented individuals in America.

As a child Rafael Agustin Guerrero was brought to California from Ecuador by his parents. He discovered his senior year of high school that he was undocumented. Facing limited options, he enrolled at a California community college -- Mt. San Antonio College. There he became an honors student and won national awards in both public speaking and acting. He went on to earn a master's degree in theater from UCLA.

Just over a decade later, he returned to his alma mater as Alumnus of the Year for accomplishments that include co-writing and starring in a nationally acclaimed comedy show about his life (N*W*C) and leading a non-profit education foundation with Edward James Olmos.

Watch his inspiring and hilarious speech (in which I am honored to receive a shout-out) and also note the gorgeous rainbow that appeared over the stadium as he spoke (photo). 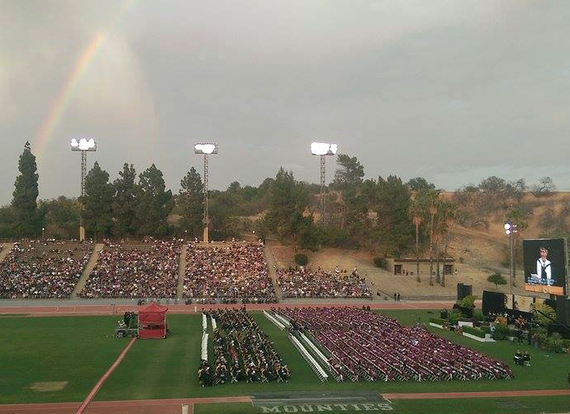