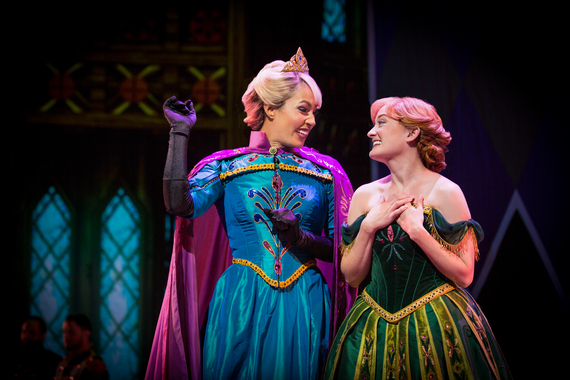 Frozen, the highest-grossing animated film of all time, is certainly destined to become a successful and long-running stage musical. In the meantime, an abbreviated stage version of the film had its world premiere this week at the Hyperion Theater at California Adventure. This adaptation, which was directed by Tony-nominated director Liesl Tommy, is tailored more for Disneyland visitors than for Broadway audiences, and is a separate endeavor from the stage version in development for a pre-Broadway engagement in 2017.

This production, which is trimmed to a little over an hour, hits the high points of the film, including the popular musical numbers "Let It Go", "For the First Time in Forever" and "Do You Want to Build a Snowman." For those few who are unfamiliar with the film, the show offers enough to grasp the gist of the story, while for diehard fans it delivers the stirring high points
.
The story begins with some stiff and awkward expository scenes, but does get roiling with a bit of humor provided by the clumsy sister Anna,charmingly played on premiere night by an non-credited actress (Disney did not provide names or other information about cast members). The evening hits its stride as Elsa sings "Let It Go" (again, a powerful vocal rendition by an unnamed actress), and director Tommy begins to pull out all the technological bells and whistles of current Broadway stagecraft, with a hefty dose of Las Vegas thrown in. While the expensive and dazzling technical elements are impressive, they are not particularly innovative - most are now familiar in the top-drawer commercial productions.

For the most part, Tommy steers a cautious course - staying faithful to the spirit of the film and serving up crowd-pleasing scenes for fans. Despite the expensive special effects, the opening night was marred by frequent low-tech glitches, primarily problems with the performers' mikes which occasionally cut out and with a couple of awkward changes of scenery. However, most of these problems will certainly be ironed out as the production gets its legs.

While the acting was solid if not inspiring, the real disappointment was the choreography by Christophe Windom, which showed little originality and felt entirely cookie cutter. Costumes by Clint Ramos were amusing and inventive and video/projection designs by Aaron Rhyme were impressive. That said, the show will certainly provide happiness to the thousands of Frozen fans who will enjoy this production at Disneyland, and will do nothing to slow this latest Disney juggernaut.