As you probably know, it is national grilled cheese month. We love this month.

We regret to inform you that we are here today to talk about frozen grilled cheese sandwiches. It's not that Chef M.J. Brando's microwaveable grilled cheeses are inherently bad, but we're just afraid things have gone a bit too far. These frozen sandwiches come in three flavors -- American, Cheddar and Swiss -- and are available in supermarkets for around $3.99. 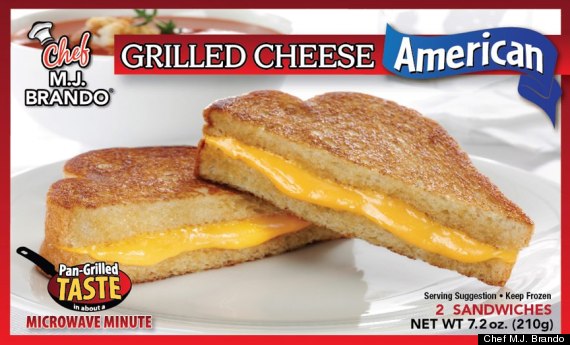 First, let's talk about the pros: these sandwiches only require a minute and a half in the microwave and thirty seconds to rest, so you don't burn your face off. The bread, we were surprised to find, was quite crispy, which we suspect has something to do with space-aged looking "crisping sleeve" you cook these in. The cheese, we were surprised to find, melted pretty nicely.

Okay, now that the pros are out of the way, let's talk cons: the most consistent complaint across the board was that the cheese all tasted the same. One taster noted, "They all taste like American cheese -- there's no recognizable Swiss bite or Cheddar sharpness."

We also discovered that the bread, after a few minutes outside the microwave, became simultaneously rubbery and cardboardy, almost like it had gone instantly stale. All of our tasters were also very taken aback by how salty these grilled cheese sandwiches were -- one sandwich contains around 890mg of sodium, about 37 percent of your daily recommended amount. One sandwich also accounts for 35 percent of our daily recommended saturated fat. In truth, for that amount of salt and fat, we'd like to taste some butter, which was notably absent.

In the end, we all like to make grilled cheese enough that a "convenience grilled cheese" is not something we'll ever require. Some thoughts from our tasters on that very point:

In the end, we urge you to make your own grilled cheese sandwiches, for your health, your self respect and the integrity of a nearly perfect food.