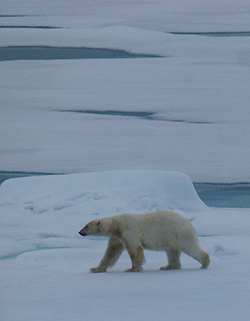 LONGYEARBYEN, Svalbard- If it weren't for the red flags marking the tundra trail to the glacier, some of us -- passengers on the Hurtigruten cruise ship MS Fram, sailing out of Longyearbyen, on Spitsbergen -- might have been tempted to strike out alone.

But as newcomers are relentlessly reminded here in the Svalbard Archipelago, where white is the new black, polar bears are the Big Dogs. More numerous than homo sapiens (3500 to 2670) and a protected species, ice bears (as they're locally known) have the run of these islands, 24,209 square miles of high arctic wilderness, just 800 miles from the North Pole. Curious, stealthy and fast on their feet, they're always on the lookout for a fresh, hot meal. 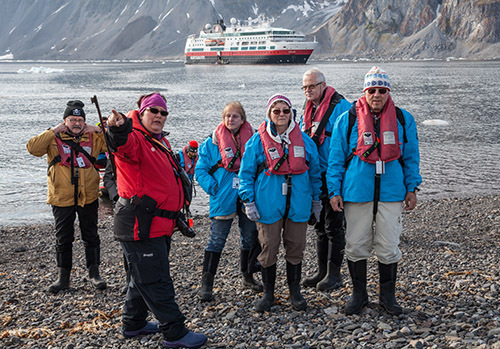 "You may think polar bears are cute," warned the Fram's Expedition Leader Corinna Skrindo before our first shore excursion, fixing a stern eye on a couple wearing cuddly-bear shirts. "But they are lethal," she said, slinging her rifle over her shoulder. "We're all trained in the use of firearms, but killing a bear is the very last option. If we spot a bear sitting on the beach or even on the next ridge, we skip Plan A and go to Plan B."

Hurtigruten isn't the only company sailing northward, of course. A half-dozen cruise ships now visit Svalbard during July and August, including LindBlad-National Geographic Expeditions, Silverseas Cruises, Quark Expeditions, Ponant and Le Boreal Cruises. Rates per person for a week's voyage start at about $5,400 per person, for two sharing a cabin and can soar to $20,000 and beyond. And because the price includes shore landings, walks and onboard talks and entertainment, everything is included except wine and bar beverages. 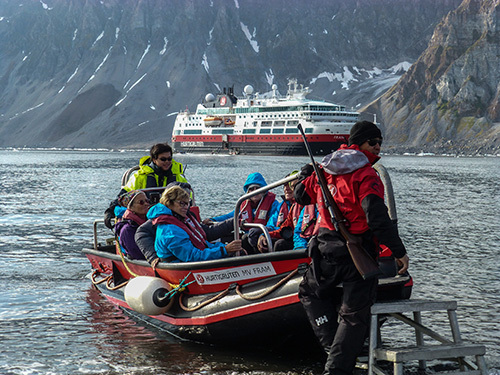 Sailing onboard the Fram, our first day's Plan A took us south to the Hornsund Inlet and into Burgerbukta Bay, where the ship anchored and the crew went ashore. Reconnoitering with binoculars, they chose a landing site on the beach, marked the "safe" path uphill and radioed an "all clear" to the Bridge. Then with loaded rifles at the ready, they stood guard while the ship's PolarCirkels (six-passenger inflatable landing craft) ferried everyone to shore. 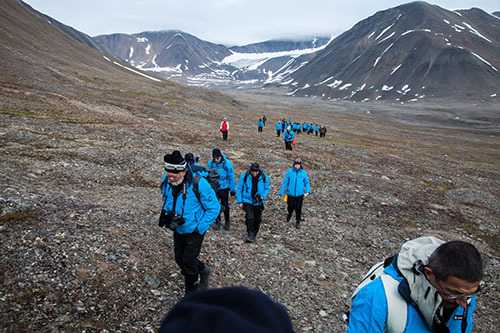 As for bushwhacking, who would want to rush surrounded by such scenery? Enormous glaciers framed the valley's head, its ice-capped peaks silhouetted against the Arctic's luminescent skies. Tiny pink, yellow and white tundra flowers testified to the north-flowing Gulf Stream's warm water, greening the summer-time climate along Spitsbergen's west coast. Polar bear tracks in the mud, shoe size 20, quickly attracted a coterie of admirers, raising everyone's secret hopes that the owner was in the vicinity.

But polar bears weren't the only reason to choose this cruise, themed "In the Realm of the Polar Bear." For most of us, the goal was to reach the 80th parallel where we hoped to see the ice pack in person. With the planet - and the polar bears -- at risk, climate change, species extinctions, extreme weather and rising sea levels were the subtext of the voyage. 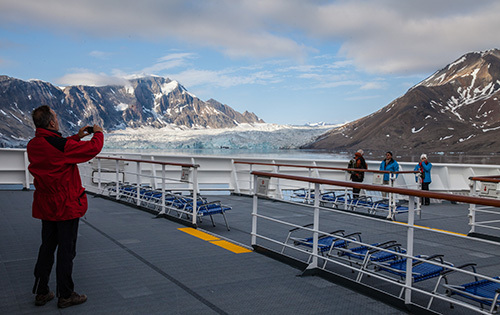 "Orange is the new black," quipped Steve, as we struggled into our orange survival suits in preparation for a PolarCirkel tour among the bergs. "And to complete the outfit," he added, "here's your orange life vest." As the MS Fram passed 79 degrees north, the edge of the ice appeared, 26 shades of silver gleaming under the midnight sun. A shifting soup of floating bergs and icy slush, it froze, cracked and refroze as the crew brought the PolarCirkels around to the gangway to pick up the first group of passengers. 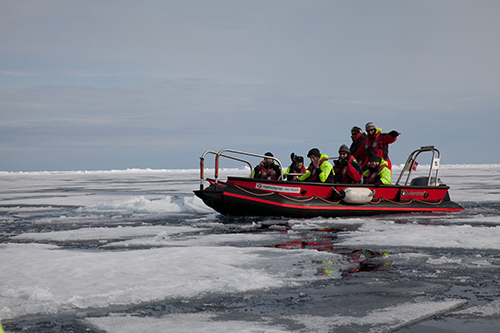 The 318-passenger Fram, built in 2007, is Hurtigruten's newest ship. With large public lounges, panoramic windows and a spacious dining room, it felt light and bright inside, even at night. The standard cabins were small but efficient, the meals were varied and delicious and the coffee bar was always piled with cookies. The most popular place for 180 degree views were from the upholstered chairs in the Qilak Observation Lounge and bar, located forward on Deck 7. The fitness center, hot tubs and outdoor sun deck were amidships and aft.

Since there are few ports in the Arctic, many shore landings depend on the weather and sightings. While searching for landing sites, passengers may see bird rookeries, reindeer herds, arctic foxes, whales, walrus haul-outs, geologic formations and polar bears. On the Fran, the first half-dozen bears were white specks in the distance. But the last two were dozing on the ice pack, close to the ship. Still, as thrilling as it was to linger there for 45 minutes to watch them stand up and stretch, and lie down again, they weren't quite near enough for a close-up photo. 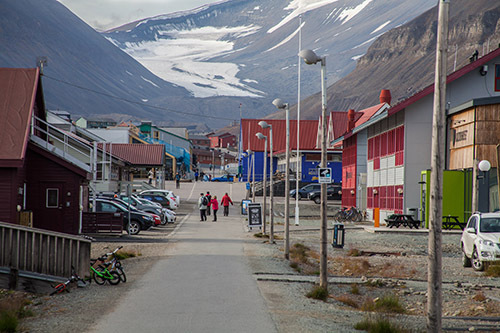 Since the cruise begins and ends in Longyearbyen, population 2043, the capital of Svalbard, most passengers stay over. What do they find? One mighty mountain, two streets, ten bars, eight restaurants, a bank, grocery story, an outstanding Arctic museum and a dozen arctic research stations.
"This is a fantastic place to live," said Anika Paust, on-site agent for the Radisson Blu Polar Hotel and the Spitsbergen Hotel. "We've got 42 nationalities here, great bars and restaurants and almost no retirees because there's no senior housing or low-cost services. You can be out in nature all day, hiking or snowmobiling and be back in time for a night out with friends."

But you have to be self-supporting, she explained. There's no welfare and no jail, thus undesirables are simply deported. "Since bears are free to roam," she said, "you have to own a rifle and learn to use it. If you're not an environmentalist at heart you won't fit in."

Know before you go: For Svalbard go to svalbard@nordicvisitor.com/travelguide/; for the Norwegian Polar Institute), go to http://cruise-handbook.npolar.no/en/hornsund/geology-and-landscape.html
Arrive early: The Radisson Blu Hotel is where Hurtigruten's buses pick up and deliver cruise passengers. Stay overnight, explore Longyearbyen and get acclimated. Go to www.radissonblu.com/Longyearbyen‎.

Staying on in Norway? Why not, when you'll probably fly to Svalbard through Oslo, Norway's capital city. There will never be a better time to take it all in.