Like tons of little kids this winter, my son loves Frozen.

Until recently, he'd never been to a movie theater. But he's shown the attention span to watch full movies at home (the usual Pixar suspects, and The Polar Express, which he's still talking about two months after Christmas, because trains + Christmas = little boy heroin), and since we'd been hearing such great things about it, we decided to take him to see the new Disney flick. (The Wolf of Wall Street was sold out.)

A month later, Frozen has seized favorite-movie status from Tom Hanks' dead-eyed motion-capture debacle, and "Let It Go" has joined "(You Gotta) Fight for Your Right (to Party!)" as one of Detective Munch's favorite songs (also on the list: "Royals" and "No Sleep 'Til Brooklyn").

I'll probably be watching this movie for years to come. I'd better get something off my chest first.

It's clever and funny (Josh Gad's exuberant Olaf!), has at least one great song, and is subversive in a way Disney (read: non-Pixar) movies rarely are. The main characters, sisters Anna and Elsa -- though typically gorgeous, big-eyed and sporting excellent hair -- are also headstrong, independent and not in need of saving (not by men, at least). I imagine parents of little girls everywhere were thrilled by the movie's playful tweaking of the age-old "true love" theme. But in the celebration of the movie's grand, family-first, "sisters are doin' it for themselves" message, one thing is being overlooked.

The girls have terrible parents.

Sure, they're only on the scene for maybe ten minutes (in another break from Disney tradition, they die off-screen), but in that brief time they do both their daughters wrong.

Allow me a brief recap: in the movie, Elsa, the eldest sister (voiced by Idina Menzel), is born with frightening freezing powers -- think Iceman from the X-Men, not Evie from "Out of this World." or Zack Morris -- and when those powers accidentally injure her little sister Anna, the parents erase them from Anna's memory and convince Elsa she's dangerous and needs to be hidden away, so as not to endanger anyone else in the kingdom of Arendelle. "Conceal, don't feel," they say, apparently in an effort to spark years of therapy.

The parents blame Elsa (who's maybe 7 years old at the time?), they shame Elsa, and they lock Elsa in her room. They don't explain a thing to Anna, who is left to wonder why her best friend no longer wants anything to do with her. When the parents die at sea, both sisters are suddenly alone in the family castle, completely cut off from the rest of the world (filthy, nameless servants notwithstanding).

Without giving the movie away, the powers that Elsa was taught to conceal at the expense of both her individuality and self-awareness soon reveal themselves in catastrophic fashion, causing Elsa to run off to a life of further isolation in the mountains, free to finally use her amazing powers without fear of persecution or harming anyone. Meanwhile, the sister she barely knows falls in love with the first man she meets, starved as she is for human connection (and probably raised on the same sexist fairy tales Disney has long purveyed so successfully), and starts wandering around the frigid, snow-covered wilderness in a sleeveless ball gown. Who can blame her, she has no life experience!

We've seen this story before -- the girls' parents, like most of us when faced with things we don't understand, are afraid. They worry that other people will think Elsa is a freak and decide to protect her from discrimination and scorn by hiding her away and teaching her to deny her powers. The irony being that if she herself hadn't grown up being treated like a freak, she would have learned to conceal and control her powers in much healthier ways (think Clark Kent). The way her parents handled it? That's how super-villains are born.

Think about it. Even the lyrics of Elsa's show-stopping "Let It Go" read like a bad guy's coming-out party: "A kingdom of isolation/And it looks like I'm the Queen/The wind is howling like this swirling storm inside/Couldn't keep it in, heaven knows I tried/Don't let them in, don't let them see/Be the good girl you always have to be/Conceal, don't feel, don't let them know/Well, now they know!"

The movie actually leads us about three-quarters of the way down the super-villain path, before veering off into something more uplifting. But that doesn't excuse Mom and Dad. (Especially since it's at least a little bit plausible that the parents are responsible for her powers, seeing as she was born with them.) The trouble their daughters, and their country, endure after they're gone is entirely on them.

Long story short, everyone lives happily ever after. And the movie wouldn't exist without the whole "isolation and ignorance" contrivance. But the fact remains that Elsa and Anna's parents did their children wrong by robbing them both of a good 10+ years of sisterly bonding, depriving them both of normal childhoods, and making Elsa out to be a monster when she could have been celebrated and should have been loved. (I know I'd be thrilled if my kid could magically keep my beer cold!)

Frozen, by way of Anna and Elsa's bumbling parents, actually provides a good lesson for the rest of us. We should leave the theater humming "Let It Go" and remembering that every child is unique. That their differences should be explored and encouraged, not feared, and that children should be taught to have pride in their individuality, not to conceal it.

Most Disney parents (note I didn't say "step-parents") are solid as a rock (Nemo's dad) or absent by no fault of their own (Nemo's mom, Simba's dad, Bambi's mom and dad, the list goes on and on); the parents in Frozen simply blow it. They mean well, and clearly love their kids, but they fail spectacularly, nearly destroying their country, and what remains of their family, in the process. It's a miracle that the naive, sheltered Anna turns out to be such a good person, and that Elsa avoids the ignominy of forever being known as the Evil Ice Queen.

Thanks to the secret villains of Frozen -- their cowardly, selfish and short-sighted Mom and Dad -- both girls could easily have grown up frozen themselves. On the inside. 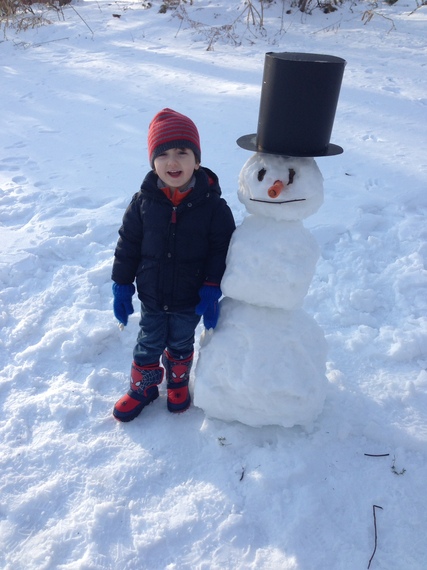 Read more from Mike Julianelle on Dad and Buried