These are some of the most notable symptoms of one of the most common hormonal, metabolic and reproductive disorders found in women: polycystic ovary syndrome (PCOS). So, what is PCOS exactly?

Women with PCOS have too many male hormones and not enough female hormones, which interferes with ovulation. With PCOS, the ovaries are typically enlarged and may even contain multiple small cyst-like structures (immature ovarian follicles).

If left untreated, this hormone imbalance can affect everything from a woman's menstrual cycle, to her appearance, to her ability to have children, to her overall health. Unfortunately, this disorder is one of the most misunderstood, under-diagnosed and under-funded conditions affecting women's health.

It's time to step up and educate ourselves. So here are four frustrating facts about PCOS and what they mean for you:

1. Between five to 10 percent of women of childbearing age in the United States, or roughly 5 million, have PCOS.

According to Sasha Ottey, founder and executive director of PCOS Challenge, Inc., "PCOS is one of the most critical, underserved, under-diagnosed and under-funded conditions affecting women's health. We need the help of media, government agencies and funding sources to improve patient outcomes and help save lives."

Despite being such a common health condition women are facing today, PCOS is misunderstood by doctors and patients alike.

What this means for you: Amy Medling, certified health coach and founder of PCOS Diva, explains in an interview that doctors don't really understand PCOS and it's really up to you to educate yourself and become empowered.

Take it from the woman who was diagnosed with PCOS, told she would never be able to have children and is now a mother of three: women need to take their health into their own hands. Don't let your doctor tell you "no." 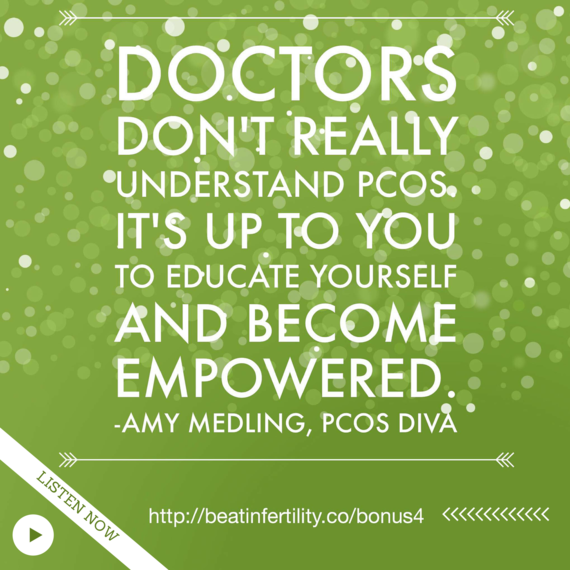 2. Less than 50 percent of women are properly diagnosed, leaving millions of women living with PCOS undiagnosed.

Like any disorder, there are common symptoms to look for. For PCOS, those symptoms largely include fertility issues, irregular menstrual periods, excessive body and facial hair, acne, depression and obesity.

What's more, women with PCOS often have many small cysts in their ovaries. It's also worth noting that PCOS is believed to be a genetic disorder, so women should also take family history into account.

But, contrary to the implication of "polycystic," not everyone with PCOS has cysts. And, while up to 80 percent of women who have PCOS are obese, plenty of women with the disorder don't show any signs of weight gain. PCOS is not one size fits all.

What this means for you: You know your body best. And PCOS presents itself differently in each woman of childbearing age. While some symptoms emerge right away, others may not develop until later in life. If you feel that any of these symptoms apply to you, meet with your doctor.

Keep in mind, a diagnosis generally only requires two of the following three criteria to be met: elevated levels of male sex hormones, missed or irregular periods, and/or at least 12 small cysts on one or both ovaries.

3. More than 50 percent of women with PCOS will have diabetes or pre-diabetes before the age of 40. And the risk of heart attack is four to seven times higher in women with PCOS.

And that's not all. Women with PCOS are also three times more likely to develop endometrial cancer than those without. The health implications of PCOS go far beyond the typical symptoms. So, it's important to continually manage your PCOS so you can help reduce the risk of serious health issues later on.

What this means for you: These are some scary numbers. Fortunately, you can decrease those numbers while in the process of managing your PCOS.

Medling suggests taking a natural approach to managing this disorder. Here are some of her specific diet and exercise tips:

4. PCOS is the most common cause of female infertility.

But it's not a lost cause. Recent research by Penn State College of Medicine found that the drug letrozole, a class of drug that blocks estrogen production, results in higher birth rates in women with PCOS than the previously preferred infertility treatment drug, clomiphene, commonly referred to as Clomid.

"Clomiphene has its drawbacks," said Richard Legro, professor of obstetrics and gynecology and lead author on the study. "It's only 22 percent successful with up to six cycles of treatment in producing a successful birth, it has a high multiple-pregnancy rate in comparison to unassisted conception, and it has side effects including hot flashes and mood changes."

To compare the two drugs, researchers studied 750 women with PCOS between the ages of 18 and 40 who were struggling to conceive. The group of women who received letrozole had a higher rate of live births (27.5 percent) than those on clomiphene (19.1 percent). In addition, ovulation rates were significantly higher with letrozole.

What this means for you: It means there's still a chance, despite what your doctors might tell you. Even if you don't opt to go with drug-related treatment, adopting an all-around healthier lifestyle can help you greatly reduce the symptoms of PCOS and improve your chances of having a successful pregnancy.

What do you think? Which of these facts can you relate to most? Share in the comments below!