WASHINGTON -- Do you have information about the recent attacks on animals at a park in Northern Virginia?

Authorities are hoping that a newly-announced reward will help their investigation of two unsolved attacks on animals at Frying Pan Park in Fairfax County.

On April 26, three therapy horses were stabbed at a riding center that helps kids with special needs and wounded veterans.

One month later, at an adjacent barn, two goats, a chicken and a calf were discovered by farm staff to have been "cut by an unknown object during the nighttime hours," according to a statement released by the Fairfax County Police Department. Police said that the calf and one of the goats were bottle fed, and would "have no fear of humans and would approach anyone who came near thinking they might be fed."

A reward of $7,500 is now available for information about the vicious attacks, the Fairfax County Park Authority announced Monday at a press conference.

WJLA-TV/ABC7 reports that police are hoping the reward will help solve the disturbing crimes:

Officers say they have received a few tips, but they hope this new reward and increased publicity will help solve the crimes.

Police add that while there's no evidence linking the two attacks, common sense tells investigators it's likely the same person.

The horses and the farm animals are all said to be recovering. "They're doing so much better," Park Authority spokeswoman Judy Pedersen told The Huffington Post. "They're becoming their playful selves again."

Henry, the injured calf, was bottle fed at the press conference. Pedersen said Henry's "stitches and staples will be coming out in a week. 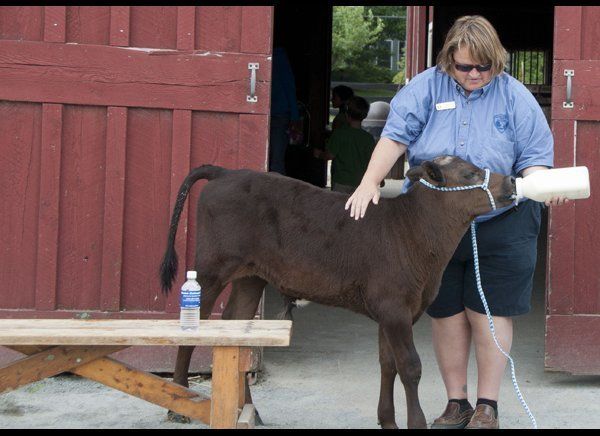