Flying Fish Brewery Company is ready to give Hurricane Sandy a big F.U. with "F. U. Sandy," a hybrid wheat-pale ale inspired by the storm. (The F.U. stands for "Forever Unloved.") One hundred percent of the proceeds from the beer will go to New Jersey Sandy victims. 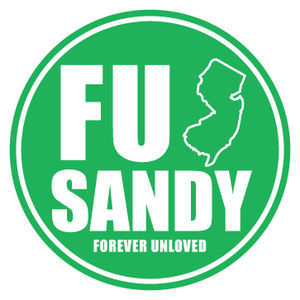 The brewery's website reveals that the beer will be brewed with a 50/50 blend of two-row pale malt and American white wheat. It's expected to have a soft mouthfeel and a fragrant nose of mangoes and guavas.

In a release, Flying Fish founder Gene Muller, a New Jersey resident, talked a bit about the brew:

“At Flying Fish, we proudly hail from the great state of New Jersey, so when tragedy struck, we knew immediately that we wanted to do something to help ... Every single aspect of this beer, from the man-hours spent brewing it to the hops used to season it to the kegs that will contain it, has been donated so every cent brought in goes to Superstorm Sandy victims.”

Roughly 100 kegs of the beer will be brewed and are estimated to bring in $50,000 for a Sandy charity, which will be nominated and chosen by Flying Fish fans on Facebook and Twitter.

The beer will be available exclusively on draught throughout the New Jersey and Philadelphia region beginning in February.