This candy bar is FUBAR, indeed.

The FUBAR -- the acronym for "F--ked Up Beyond All Repair" -- is the Fresh Juice Party's way of making a political statement against government sending American men and women to war "like consumable commodities."

"Perhaps people might see the metaphor as a cruel and tasteless joke," the group wrote in a press release. "This is far from a joking matter ... Ask members of Congress and private military defense company executives if it’s a 'cruel joke' when they treat American and foreign lives like consumable commodities."

Amateur chocolatier and Fresh Juice Party head Naomi Pitcairn told HuffPost Weird News that the group hasn't received any response from the government offices she sent her treats to, but she didn't expect them. She said she wanted to make a statement, rather than make light of dead soldiers.

"There's nothing funny about killing people -- we're just reflecting to our government what they're doing to human beings," she said. "This is a rude statement about something that's worse than just rude ... Our government is sending soldiers out, throwing them in a box and sending back the pieces." 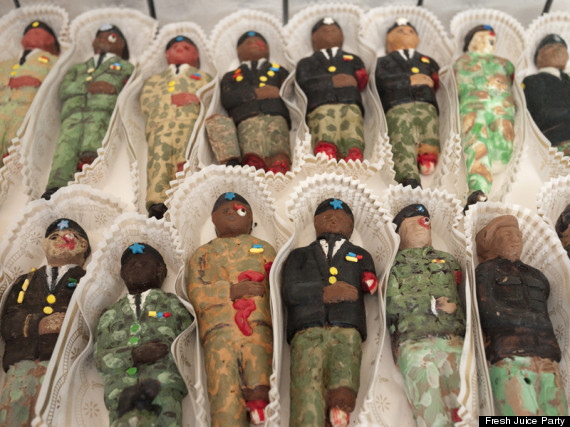 The "statement" comes from a group that's used to shock value. In 2011, the group stood up at an Obama fundraising event and sang a song (video below) called "Where's Our Change" for nearly two minutes before getting kicked out by security.

Reprehensible or not, the truly offensive aspect of the FUBAR is the taste. Pitcairn said that the chocolate isn't approved for human consumption, but HuffPost Weird News editors tried it anyway. The one we received is a highly detailed and graphic depiction of an American soldier, missing an arm and a leg and lying in a box that plays music when you open it. The candy bar itself tastes like hardened cereal milk, far too sweet to be called anything but sugar.