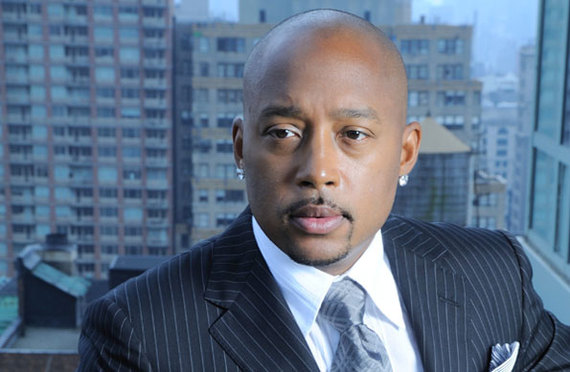 Yesterday I attended an event hosted by the Chicagoland Chamber of Commerce, at which the CEO of FUBU, and star of the ABC television show Shark Tank, Daymond John, would be speaking, telling the story of his success as an entrepreneur and fashion mogul. I was among the last to arrive, so I took a seat in the back row where a few seats were still available. The empty seat beside me was taken a moment later by a thirty-something year-old white guy wearing a suit, who nudged me and said: "You can check your coat if you want," nodding at my coat on my lap.

I was slightly annoyed -- I didn't check my coat because I didn't have time. Lots of other people had coats, so I wasn't breaking any rules, dude. Why are you talking to me? But I soon realized he was just the chatty type, as he proceeded to nudge me -- stop nudging me, dude -- throughout the introductions of the day's events and speakers. "Lot of people here, huh?" and "Wow, you can barely hear her." Little inane observations that were unnecessary but harmless. Generally I just shrugged or said, "Yeah," to be polite. But then we reached the point where the speaker was introducing Daymond John, mentioning that he was the CEO of FUBU, and Mr. Mutter nudged me -- stop nudging me, dude! -- and chuckled. "FUBU?" he laughed. "Wow." At this point I was getting irritated, especially because I had a feeling where this was going. So rather than shrug, I turned and said, "Why is that funny?" He laughed again. "I mean, FUBU? No one wore FUBU. Come on," he added at the end, trying to sway me into agreement. "It was a joke." I just stared at him as Daymond John took the stage to applause, and as Mr. John began to speak, I pointed at the podium rather than responding, hoping Mr. Mutter would actually listen.

For the next hour, Mr. John told us his story. The story of starting FUBU in his mother's house in Queens. The story of her working three jobs to support him and his seven brothers and sisters. The story of a self-starter who saw a market and created a product, who found his way into the Magic tradeshow in Las Vegas even though he couldn't afford a booth, coming away with $300,000 in orders. A true bootstrapper who built an empire from the ground up and now makes more money every year from speaking engagements and book deals than Mr. Mutter can even dream of.

But in that dude's mind, FUBU is a joke. Why? Because it faded out of popularity? So do a lot of brands. It's the nature of fashion. Big deal. In its prime, FUBU was worn by LL Cool J, Janet Jackson, Busta Rhymes, Mary J. Blige and other huge names. Yet to this sitting-too-close, muttering-in-my-ear, nudging-me-despite-my-death-glare dude in the back row, FUBU was a joke. Why?

For Us, By Us. Not you, Mr. Mutter. Is that why FUBU was a joke to you? Because it wasn't made for you? That the "us" Daymond John made "a thing" is what you perceive as an "Other"? Mr. Mutter said, "No one wore FUBU," and I almost laughed. So Mr. Johns became a gazillionaire because no one was buying his clothes? That's funny. Because from where I was standing in the 90s, everyone was wearing FUBU.

And that's what it's about, isn't it? It's a matter of position and perception, and the eagerness of white people to perceive their standpoint as superior; the willingness of white people to perceive another culture's trends as "a joke" merely because those trends are outside the realm of their own experience. In Mr. Mutter's ridiculous statement that "no one wore FUBU," instead I hear from his mouth: "No white people wore FUBU, therefore no one that matters wore it." In this guy's mind, it doesn't matter that Daymond John made millions off of a market that had been previously untapped: That market was primarily people of color, and was therefore a joke.

It's funny how white supremacist thinking permeates our day-to-day interactions. As white people, our racism seeps into our minute observations: In our minds we have a picture of the people we are told we're better than, and those people have a culture -- language, foods, clothing -- that we are taught that it's acceptable to mock. Rap music. "Black" movies." Fried chicken. In our racism, we make these things the butt of jokes: Things that "people" don't participate in; just things that black people participate in. Dehumanization comes slyly in our jokes, and the things we like and don't like -- the things we associate with and the things we don't. Sometimes we don't even know we're doing it. A white guy might mock FUBU because "no one wore it." But, sir: People did wear it. Millions of people wore it. Most of those people just weren't white. But they're still...people.

As a white woman sitting in the back row, I must have seemed to this tool the kind of person who would chuckle along slyly at his subtle racism; an ally in his attempt to sully the impressiveness of the man taking the stage to speak to a room of businesspeople about his expertise as a businessman. One word for you, Mr. Mutter: fail. You fail at being sneaky with your supremacy. You fail at attempting to bring down a man who could buy you with a blink. But most of all you fail at thinking. Every parent everywhere has told their child "Think before you speak," and you failed at that most basic instruction, instead choosing to spew your nonsense to the nearest available ear. Did it not occur to you that the person you were muttering to may not have agreed with what you're saying? That the fact that the person next to you is white doesn't necessary mean they share your inclination to mock black culture? Of course not. To people like Mr. Mutter, whiteness is a secret club with unspoken rules; where it is assumed that other white people will band together in the joyous sport of supremacy and happily look down on everyone around them.

Instead, Mr. Mutter, try sitting quietly. Try listening. Try standing in another pair of shoes. They don't have to be FUBU, but you damn sure need to change something. The world is made up of people who don't look, sound or dress the way you do -- and the only one who's a joke right now is you.