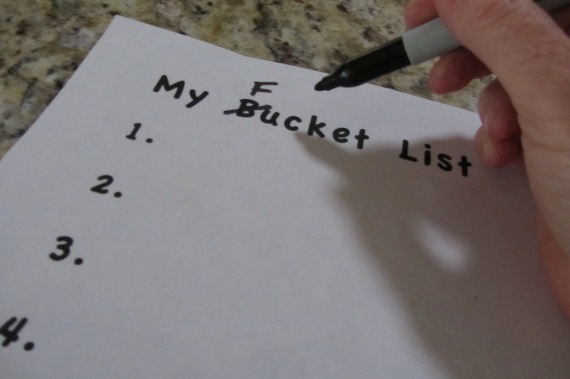 A couple of weeks ago Thom and I had lunch with a long time friend I'll call Bob. After a great meal our conversation turned to health and successful aging as it sometimes does for people in midlife. We all agreed that we were extremely fortunate to live in an area where we can observe people well into their 90s who are vibrant, active and younger in mind and heart than many people half their age.

Next we talked about the importance of living each day as a gift, never taking a moment for granted, and fulfilling our Bucket List while we were all healthy and financially able. That's when Bob joked that he recently had dinner with a woman in her late 80s who had a different take on the idea. She told him very emphatically that she was done with the idea of a Bucket List. At her age she was working on her "F*%t It List!" And while we all laughed at the spunk of Bob's friend, that declaration got me thinking.

Sure it's healthy to have a Bucket List containing all the goals and dreams we hope to accomplish during the remainder of our lives. But maybe a F*%k It List is good as well. After all, at a certain age we should be both willing and able to let go of anything that drags us down and holds us back from living a happy and content life. So after some time thinking about it -- here are a few things I'm putting on my F*%k It List that perhaps might convince some of the rest of you to make such a list as well.

The very first thing on my F*%k It List is not caring what others think about me. I've cared about that for far too long and it's time to just say "F*%k It!" Of course, even as I write this I'm aware that I don't normally use four-letter-words, so writing this post with f*%k in the title (and in the text!) is quite a step for me. But again, it's all because I worry too much about whether you, my friends and my readers will like it. Most of the time I find plenty of other words that work equally as well or better. But let's face it -- sometimes f*%k is just the right word, and right now I'm giving myself permission to use it when it seems to fit the circumstance.

Second is giving up the need/desire to have people like me. Again, this is something I've carried around for most of my life and it's time to just say "F*%k It!" I know, and you probably do too, that not everyone likes everyone else for all sorts of reasons. You might not like my politics, my sense of humor, my take-charge attitude or any one of dozens of characteristics that I have -- and that's okay. Just like not everyone likes chocolate, not everyone will like me either. So instead of trying to make myself into someone that everyone maybe/might like -- I'm going to focus on those people who like me just as I am and appreciate what I uniquely offer the world. And maybe, just maybe, when I give myself permission to just be myself regardless of whether it rubs people the wrong way or the right way -- I will give others permission to be themselves as well.

Next I say 'F*%k It! to ever listening to trolls and/or other critics in relationship to my writing. Maybe because I've had no formal training or a related degree -- or maybe because it's always been so important to me, whatever the reason I've always been a little sensitive about my writing. True, it's gotten better as I go along because I've been doing it so long -- but I still care more than I should about how some people judge my writing. And in spite of the fact that I've now got a number of people reading my blog who seem to appreciate both my style and my variety of topics, I sometimes catch myself paying more attention to the critics than I do to my fans. And it's time to say "F*%k It" to listening to trolls any more. As author Brene Brown says, " ... I can't be paralyzed anymore by the critics. My new mantra is, if you're not in the arena getting your ass kicked on occasion, then I'm not interested in your feedback."

Plus, I think it's time for me to definitely say "F*%k It" to whether or not I look attractive or "good for my age." For the most part I don't obsess about my looks or my clothing. (Those who know me personally can likely attest to that!) But what I've noticed at this age is that there is a very strong emphasis on us all, especially women, to look younger than we supposedly should and do anything and everything we should to stay there. While I'm all for feeling energetic and vibrant -- and good health is very important to me, I say "F*%k It!" to trying to please other people's definition of what my age should look like, act like, or be.

The last thing that I think it's high time to say "F*%k It!" to is fear. And I'll bet that I'm not the only one that could let this one go and be happier. Remember, most of the time fear isn't real -- instead it's -- False Evidence Appearing Real. Or as Dale Carnegie said, "You can conquer almost any fear if you will only make up your mind to do so. For remember, fear doesn't exist anywhere except in the mind." But fear tends to be tricky and disguise itself in all sorts of ways and means. For example, I might not think that I'm afraid of what others think, but if I insist on perfectionism, then I am holding myself back from a fear of not being good enough. Fear is anything that consciously or unconsciously keeps us from enjoying, appreciating and loving every moment of our lives. And I say "F*%k it! to anything that does that!

Okay I think I've given you enough to get the point. I realize after writing this that I've only touched the surface of things I should finally let go of and say "F*%K It!" to in my life. Chances are good that my list will keep growing from here on out. But now that I've raised the idea I suggest that you spend some time allowing the idea to soak into your head and see if there isn't something you'd like to do the same with as well. SMART Living isn't always about doing something or adding something to your life to make it better. Sometimes the best course of action is letting something go and to just say, "F*%k It!"

Kathy Gottberg believes in living healthy, authentic, fearless and SMART. This post originally appeared on her blog with a number of related comments. For other similar topics go to SMART Living 365.