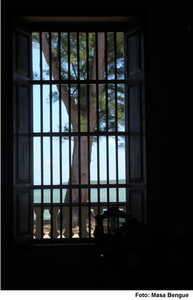 This is not the chronicle of a woman who manages to escape from her abusive husband, nor the story of a teenager who runs away from authoritarian parents. The title refers to another process of emancipation - complicated and feudal - that doctors, nurses and pharmacists must request to travel outside the island. Under the significant name of "liberation," there is a mandatory process that Public Health workers must complete to be allowed to leave, temporarily or permanently. Included in the record of the possible traveler is whether he owns his own home or car, because the State will confiscate those if he does not return within 11 months. The paperwork passes through numerous levels of authorization that can delay it a year or a decade. Many never receive a reply.

Mario saw patients in a specialized practice and began to be seen as a deserter when he announced a desire to reunite with his family across the sea. He was immediately punished by being assigned to a position of general practitioner in an emergency room far from his house. They reminded him every day that the degree hanging on the wall in his living room had been given to him by the Revolution, which he now was betraying. Forced to swallow it whole, he endured the four years of repeated jabs and investigation for his safe-conduct to leave the country, which the minister of his branch still had not signed. "We have many cases, we can't cope," the secretary repeated, and his exiled wife broke into tears on the telephone when he told her. His children, meanwhile, were growing up in some distant place without a father.

In the midst of his impotence, Mario came to reproach his mother for having encouraged him to study medicine. "Why didn't you warn me!" he shouted one afternoon, when he could no longer bear the white coat that had become his shackles. When they finally allowed him to board the plane, a circle of baldness delineated the middle of his head and a nervous tick had taken control of his hands. To those who welcomed him in a distant airport, he was not the enterprising orthopedist from years ago, but someone who had decided to have nothing to do with hospitals. The agonizing process of "liberation" had taken away any desire to fix a knee or correct an ankle; he couldn't stop thinking that it was that profession that had separated him from his family.