There is a woman I know who breaks my heart. She is beyond beautiful; she is luminescent. It is a quiet beauty that doesn't need lipstick or three-inch heels. It is the best kind of beauty, the kind that shines outward from deep within, where there is a soulful goodness, a grounded spiritual center that holds her upright when the waves of life come crashing against her. And they often do. It is crazy how much this woman has endured, and overcome.

She is proud of several things about herself -- her heritage, her children, her friendships. But she can barely accept a compliment. She has worked hard to stop denying them outright, but her eyes betray her bashful "thank you." They turn downward or shift slightly to the right, casting aside any perceived authenticity that came with the kind words.

She champions others, cares for others, cheers for others. She gives far more than she takes. She puts herself last when she deserves to be first.

The list of things she likes about herself is short and generic; she is careful to avoid thinking about it too much, lest anyone believe she's full of herself. Yet, the list of things she wishes she could change about herself is exhaustive and detailed. This list depresses her so she tries not to think about it, but always it's there, a catalog of all the ways she's not measuring up.

She hates that list, yet she clings to it. Somehow, it has become her comfort, holding her down from being healthier, happier, respected; keeping her from being in love with herself as she is, and in love with someone who really loves her back.

I often think about this woman when I run, because I love her and I have been like her for most of my life. I know that she has tried to change things about herself that she hates, but that's the reason it never works -- because she's trying to use hate and shame and guilt as fuel. And they aren't fuel.

She'll never get anywhere with hate and shame and guilt. They are toxic. They are the source of the problem, the crack in her fuel line, the reason all her good intentions eventually drain away. They aren't helpful. They aren't healthy. They are a cancer, eating away at her brittle self-esteem and her time here on Earth, the very limited time she has to love herself freely and without apology.

Love is what she needs. Love is the only kind of fuel that will propel her forward with any sort of sustainable momentum. And I watch her give it all away, siphon it from her own tank until she's running on fumes and berating herself, once again, for not being strong enough, good enough, for not having enough willpower or motivation or energy or time, when in fact all of these things would magically appear if she just found one thing and held it close: Love.

If I could I would reach inside and pull the choking vines of hate and shame and guilt that have flourished there with such resilience, I'd yank them by the roots, and she would be dizzy, almost fearful of how her existence feels without them. And then maybe she'd finally hear it, the heart within that beats a repeating love song just for her.

But I can't do that. I can only keep telling her how beautiful she is, how powerful and amazing and brilliant, how her smile makes the world better because she means it.

There are so many things to love about her; all she has to do is pick one and harness the power of that love as fuel to do the next thing, the hard thing, the thing she's been wanting and needing and yearning to do, whatever it is. Anything. Everything.

Maybe today is the day she'll do it. 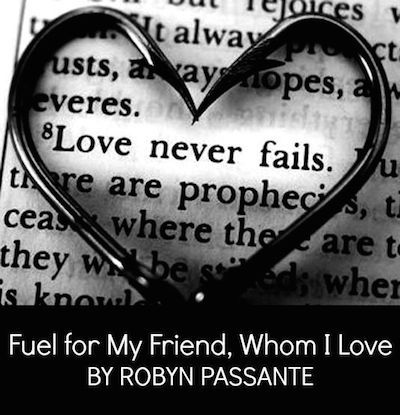 This post was previously published on Holding the Strings by Robyn Passante.