Two years after the disaster at the Fukushima Daichi nuclear plant in Japan -- called the "worst accidental release of radiation to the ocean in history" -- a fish with staggering levels of radiation has reportedly been found in the vicinity of the plant.

According to French newspaper Le Monde, the fish was caught last Friday. It reportedly contained more than 2,500 times the legal limit for radiation in seafood. 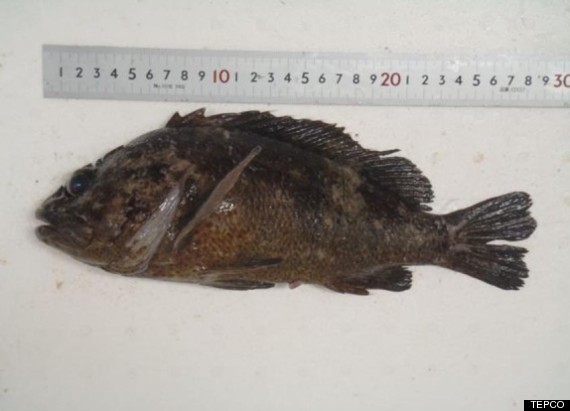 (Photo of the "murasoi" fish caught near Fukushima. Credit: TEPCO)

The fish, similar to rockfish, was caught at a port inside the Fukushima plant, a TEPCO spokesman said.

The find is a stark reminder that fears of radiation continue to haunt the island nation years after the nuclear catastrophe rocked Japan's waters.

The Fukushima disaster occurred in 2011 after the plant was ravaged by a devastating tsunami following an earthquake. The facility's emergency generators were flooded, causing meltdowns in three reactors. As radiation spewed into the surrounding waters and atmosphere, thousands of residents were evacuated and fishing around Fukushima was stopped. At the time, the government reportedly also "banned beef, milk, mushrooms and vegetables from being produced" in the surrounding areas.

Sale of some kinds of seafood and produce have since resumed, according to the Jiji Press.

Since the Fukushima catastrophe -- the largest nuclear disaster since Chernobyl -- scientists have attempted to figure out the spread and impact of the radiation that was released that fateful day.

In April 2012, researchers from the U.S.-based Woods Hole Institution, led by marine chemist Ken Buesseler, announced that they had found "elevated levels" of radiation in the marine environment around Fukushima.

Then in October, Buessler and his colleagues revealed that about 40 percent of the fish caught near the nuclear plant was found to be contaminated with radioactive caesium above government safety limits. According to the Guardian, Buesseler warned at the time that Fukushima fish "may be inedible for a decade."

As NTD-TV notes, the scientist also suggested that radiation could still be leaking from the crippled Fukushima plant.

"We can't sell any of these fish, it's such a waste," Kozo Endo, a Japanese fisherman from the Fukushima area, told ABC Radio Australia last November. "We can only catch them for radiation sampling."

Both the Japanese government and TEPCO have said in the past that the tainted fish that have been found in the waters near the nuclear plant may not have been caused by the Fukushima fall-out. According to ABC, Japan's Fisheries Agency said last year that the contamination was "sinking deeper into the seabed and is not entering the food chain," while TEPCO maintained that no "tainted water is leaking from the facility."