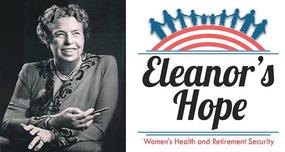 Eleanor Roosevelt, social activist and America's longest-serving first lady, would have celebrated her 130th birthday this week. There have been so many momentous changes in our nation during the 52 years since her death. Even so, one can't help but wonder whether we have truly fulfilled Eleanor's hope for America, particularly when it comes to equity for women.

In so many ways, women have come a long way; however, American women are still lagging behind their male peers in too many significant measures. Retirement security is one of those areas where women still face a future marked by inequality. That's why we at the National Committee to Preserve Social Security and Medicare have launched "Eleanor's Hope," a national initiative to mobilize women of all ages to advocate for income equality, retirement security and health protection.

"It is better to light a candle than curse the darkness."
--Eleanor Roosevelt

The demographic reality facing most American women simply can't be ignored. Women live longer than men, on average, yet their lifetime earnings are generally lower. They are more likely to work in part-time jobs that don't qualify for a retirement plan or interrupt their careers to take care of family. The gender wage gap continues, meaning women earn only 78 cents for every dollar paid to their male counterparts. Lower wages mean less is contributed to Social Security for their retirement. The good news is that more women are participating in pension and retirement-savings plans than ever before. The bad news is that the retirement-savings gap persists.

According to the New School for Social Research, 75 percent of Americans nearing retirement have less than $30,000 in their retirement accounts. Almost half of middle-class workers will be poor or nearly poor in retirement and living on a $5-per-day food budget. The National Institute for Retirement Security reports that four out of five working families have total retirement savings that are less than their annual income, and 45 percent do not have any retirement assets at all. The economic downturn was especially difficult for elderly women. The latest census reports that nearly 2.6 million elderly women are living in poverty, and 733,000 of those live in extreme poverty. For women who live longer on lower benefits, America's retirement crisis is very real. That's why the financial protection that Social Security provides is even more critical for the millions of women who depend on this vital program to keep them from poverty.

Not only do women live longer than men, but they are also more likely to suffer from three or more chronic conditions, including arthritis, hypertension and osteoporosis, making Medicare especially vital for older women. The Kaiser Family Foundation estimated that out-of-pocket spending in 2009 for Medicare beneficiaries aged 65 and older was $4,844 for women, compared with $4,230 for men. As beneficiaries age, out-of-pocket spending consumes a larger share of their income. At age 85, total out-of-pocket spending for women was estimated to be $7,555, compared with $5,835 for men. Clearly, the inequity women face in the workplace continues to follow them even into retirement.

"The battle for the individual rights of women is one of long standing and none of us should countenance anything which undermines it."
--Eleanor Roosevelt

There are ways to address these inequities if we can find the political will. Our "Eleanor's Hope" campaign will lead grassroots advocacy and education efforts in our communities and on Capitol Hill to build momentum in Congress to address these critical retirement issues. Our goal is to raise awareness, recruit and train new activists and bolster congressional leaders who are making a difference on women's health and retirement-security issues. We'll advocate for legislation that addresses the inequities threatening millions of retired women. Some of our proposals for Social Security and Medicare include:

If this sounds ambitious, it's because it is. However, just under 77 million baby boomers are retiring, and more than half of them are women. Too many will face retirement inequity and insecurity. As we honor Eleanor Roosevelt's legacy this week and into the future, we must continue the work necessary to fulfill Eleanor's hope for America.

"The future is literally in our hands to mold as we like. We cannot wait until tomorrow. Tomorrow is now."
--Eleanor Roosevelt