Although recent years have seen a wealth of gay content on the New York stage, “Fun Home” breaks fresh ground as the first Broadway musical to feature a lesbian protagonist.

The advance buzz on the musical, which is currently in previews at Circle in the Square Theatre, has been quick to emphasize that fact. In reality, though, such a sound bite oversimplifies the show’s subversive qualities. Based on out artist Alison Bechdel’s graphic memoir of the same name, “Fun Home” is actually a compelling look at two sides of the queer experience, with a complex, multi-faceted message about family relationships.

From left: Skeggs, Malone and Lucas in “Fun Home.” 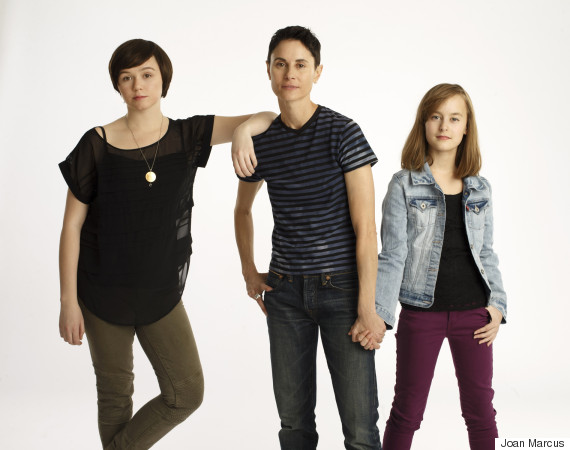 The musical, which is directed by Sam Gold, played to sold-out audiences and nabbed sterling reviews when it opened Off Broadway at New York’s Public Theater in 2013; it was also a finalist for the 2014 Pulitzer Prize for Drama.

So while “Fun Home” couldn’t be further from the top hats and jazz hands of the traditional, feel-good Broadway musical, the cast and creative team are confident their work will find a captive audience, given the universality of the show’s coming-of-age themes.

“With any show you do, there’s a concern about whether or not an audience will embrace it,” Lisa Kron, who penned the book and lyrics, told The Huffington Post in an interview. “If we start to have nervousness around that question, it’s not going to do anything for us.”

Still, composer Jeanine Tesori admitted that she and Kron experienced some creative tension over how to initially portray a relationship between college-age Alison and her girlfriend (Roberta Colindrez) while the show was in development.

“There was a point when I said to Lisa, ‘These two young women, they have to kiss. They're in love, they have to be sexual,’” Tesori recalled. “And she was like, ‘I can’t bear it if people laugh at them.’ I realized then all she had been through, and it was so heartbreaking to me. It wasn't about her holding back; it was about her protecting the character.”

Aesthetically, “Fun Home” has been given a sizable upgrade since moving uptown, too. In a move that Cerveris says “strips away even more artifice,” the show is now being presented in the round in an effort to make the audience feel like they, too, are part of the action being presented onstage.

The Broadway cast of “Fun Home”

“The audience that finds this show is going to be a thinking audience, because it lives in such an emotional place,” Malone said. “As a culture, we’ve arrived at a place that is just aching for this show to be.”

Regardless of how the show ends up faring with Broadway audiences, Kron says she will forever see “Fun Home” as the ultimate extension of the work she was doing as part of the women's collective WOW Cafe Theatre in the 1980s.

“People often say to me, ‘This is so much bigger than just a story about a lesbian.’ And I say, ‘What has changed is your sense that a lesbian is an actual human being who can be as much of a prismatic reflection of the human experience as any other type of character,’” she said. “There’s no explicit explanation, justification or apology in this show, and to me, that’s a very exciting thing to put on stage.”

“Fun Home” is currently in previews at New York’s Circle in the Square Theatre, with an opening night set for April 19. For more information, head here.