UPDATE: March 18, 11 EST: Over 27 hours later, nonviolent protesters spent the night twenty feet in the air, atop mountain tripods, in a sleep-in at the EPA headquarters in Washington, DC. Determined to convince EPA chief Lisa Jackson to make her first trip to the Appalachian coalfields, the protesters have vowed to keep up their creative action until the EPA effectively moves to halt Clean Water Act-violating mountaintop removal mining permits.

Photos of the action in DC can be seen here.

Risking arrest today and through the night, creative protesters from the besieged Appalachian coalfield regions and their supporters from across the country, have set up and locked themselves to two 20-foot purple mountains majesties in front of Lisa Jackson's office at the EPA headquarters in Washington, DC, to call attention to her agency's mandate to enforce the Clean Water Act and halt the dumping of toxic mountaintop removal coal waste in our nation's waterways.

People are here today expressing views on MTM, a critical issue to our country. Theyre concerned abt human health & water quality & so am I

MTM, for the uninitiated, refers to mountaintop mining--Big Coal's term.

MTR, for untold thousands of Appalachian coalfield residents living with the daily reality of millions of pounds of ANFO explosives rattling their bones and house foundations, raining toxic silica and coal dust showers, contaminating their waterways and watersheds with toxic coal waste, and wiping out our nation's hardwood forests and adding to greenhouse gases, refers to mountaintop removal--and this should be in the EPA's terms and twitters, too. 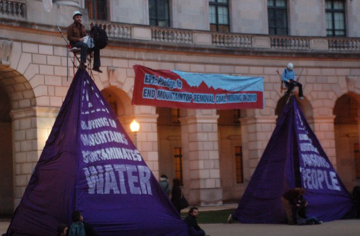 Take EPA administrator Lisa Jackson. We all love Lisa Jackson. After eight years of a Bush-era gag-order, Jackson has effectively reinvigorated her agency staff of 17,000 employees to protect air and water quality, prevent exposure to toxic contamination in our communities, and reduce greenhouse gases, according to their agency website.

And yet, not one--count 'em--of Jackson's top officials in DC or herself have made any effort to actually visit a mountaintop removal site before making life-threatening decisions.

Coalfield residents have politely invited, requested, asked, and begged for a Jackson visit as the EPA makes its decisions behind closed DC doors.

No doing. In truth, Lisa Jackson and her EPA officials are simply too afraid of the Big Coal lobby and their bankrolled politicians--and don't feel the Obama White House covering their backs--to set a foot on the coalfield frontlines.

So, they talk--and wonderfully so--they twitter, they review, they assess, they release statements, and then quietly let kinder and gentler mountaintop removal permits slide by while the assault on Appalachian communities continues.

Even the EPA's own officials have recently found "toxicity levels as high as 50 times the federal guidelines in water downstream from mining operations" in Appalachia.

But, according Adora Andy, spokeswoman for EPA, today's protest "is based on a fundamental misunderstanding of EPA's role. Adora went on to explain that the EPA does not regulate the mining industry, but is only "responsible for ensuring that projects comply with the Clean Water Act."

Except it's the mining industry that isn't complying with the Clean Water Act.

She added: "Instead of "holding up" permits, Andy said, EPA is working with coal companies and the Army Corps to reduce the amount of waste dumped or the number of valleys filled."

And that's the kicker that Appalachia is expecting: Now that the EPA has reportedly handed over 73 of the 79 massive mountaintop removal operation permits that were in advance review, the fate of the Appalachian health and well-being is now in the hands of the Army Corps.

And here's the real fundamental misunderstanding: Mountaintop removal, which provides only 8 percent of our national coal production, is a needless crime--one of the most egregious human rights and environmental violations today. If mountaintop removal waste-dumping operations are in clear violation of the Clean Water Act, as panels of scientists and the EPA and Jackson have noted, then MTR or MTM operations still remain in violation of the Clean Water Act, even if the EPA and Army Corp strike a compromise to reduce the amount of waste dumped.

Following a nearly 40-year policy, Lisa Jackson thinks she can "minimize" and regulate the impact of mountaintop removal, despite the overwhelming evidence by a recent scientific study that, "the science is so overwhelming that the only conclusion that one can reach is that mountaintop mining needs to be stopped."

Which brings us back to today, and the protesters risking arrest in front of Lisa Jackson's office.

They have no other choice to get Jackson's attention, and her twitter. 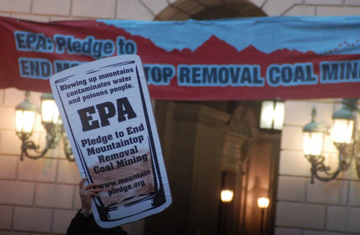 In the face of these blatant Clean Water Act violations,

If Lisa Jackson won't go and see this first hand in Appalachia, then the Appalachian coalfields are going to be planted, albeit two 20-foot tripods, in front of the EPA.

According to Jackson's own website: "She has made it a priority to focus on vulnerable groups including children, the elderly, and low-income communities that are particularly susceptible to environmental and health threats. In addressing these and other issues, she has promised all stakeholders a place at the decision-making table."

I look forward to the day that she can twitter that same sentiment, from the Appalachian coalfields, not her DC office.