After witnessing the Islamic Republic of Iran violate human rights, persecute other religions, adopt sharia law, murder dissenters, and compel the judiciary to serve the Ministry of Intelligence, I am now convinced that the worst thing that can happen to a free Western country is to allow Islamic fundamentalists to have a say in government.

Most of the world's 1.6 billion Muslims pray in Arabic, but they do not speak Arabic as their mother tongue; that includes most Iranians. Yet the problem isn't in the translation, rather the problem rests with bad ideology.

Fifteen of the nineteen 9/11 hijackers were Saudi Arabian, two more were from the United Arab Emirates, one was from Egypt, and one from Lebanon. They were all from Arabic-speaking countries, and presumably the terrorists read Islamic scripture in the original Arabic. Muslim scholars did not unite to protest this act of terrorism. Instead, many celebrated a victory, because the Quran includes passages that permit violence to expand Islam.

Most so-called Muslims are peace-loving, because they do not follow the rules. They practice Islam à la carte, a new religion.

Consider for a moment Grand Mufti Abdul Aziz Al-Asheikh, the highest religious authority in the Kingdom of Saudi Arabia, home of Mecca. The Grand Mufti studied Islamic scripture in the original Arabic. He is a regular speaker in Mecca and head of the Permanent Committee for Islamic Research and Issuing Fatwas.

In 2012, the Grand Mufti issued a fatwa calling for the destruction of all churches on the Arabian Peninsula. In other words, he incited terrorism.

Saudis are mainly Sunni Muslims, of which many are Salafists or Wahhabis, followers of the conservative teachings of 18th century scholar Mohammad ibn Abd al-Wahhab, whose ideology helped form the original Saudi state. Around 10-15% of Muslims are Shias, and most Iranians are Shia Muslims. Since Sunnis and Shias have a blood feud dating back to Mohammad's first successor, many Iranians interpreted the Grand Mufti's fatwa to include the destruction of Shia mosques. Fundamentalist Muslims are at war with each other and with non-Muslims.

According to the "Final Report of the National Commission on Terrorist Attacks on the Unites States," also known as the 9/11 report, Saudis and Qataris, among others, funded Osama bin Laden. A current theory holds that Saudi Arabia helped fund the terrorists who formed ISIS in order to advance the Sunni agenda on the Arabian Peninsula. ISIS destroyed churches and Shia mosques, and targeted Christians, Shia Muslims, and other minority religious groups for persecution, rape, murder, and enslavement.

If Saudi Arabia did fund ISIS, they now seem to regret it, because their monsters went rogue. ISIS formed its own Wahhabi-based caliphate and claims to speak for all of the world's Muslims. King Abdullah of Saudi Arabia and other Islamic Gulf governments would rather not be replaced by new zealots.

Arabic-speaking Muslim countries aren't alone in supporting terrorism. The Islamic Republic of Iran gives aid and comfort to terrorist groups, and it still supports the death fatwa issued by long-dead Ayatollah Khomeini against Salman Rushdie, the author of Satanic Verses, a novel that ridiculed some Islamic practices.

Iran's Ayatollah Vaez-Tabasi, a top Shia cleric, has called for "perpetual holy war." He presides over the Imam Reza shrine, one of the holiest sites in Islam. It draws as many annual visitors as Mecca.

Fundamentalists view Muhammad as the perfect man. Yet Muhammad led violent followers who raped, enslaved war captives, and murdered unbelievers as part of Islam's expansion program. Today that behavior is emulated by Islamic terrorists in Iraq, Syria, Nigeria, and more.

Muhammad had several wives. Among them, he married a slave given to him as a gift. When he was in his fifties, he asked for a friend's six-year-old daughter and consummated the so-called marriage when the child was only nine. Muhammad criticized corrupt customs of his Arab contemporaries, yet by contemporary U.S. standards, he had sex with a girl who was too young to be capable of consent, and we call this statutory rape. (Sahih Bukhari volume 5, book 58, number 234)

If fundamentalist Muslim leaders don't understand how flawed this ideology appears to the West, they just aren't trying hard enough.

Yet in 2005, after Kurt Westergaard drew a cartoon mildly satirizing Muhammad as an assignment for a newspaper, many Muslim clerics cried blasphemy and called for his death, including a Pakistani cleric who offered a one million dollar reward to anyone who would murder the Dane. Thousands of Muslims protested. In 2010, an axe-wielding Muslim assailant attacked Westergaard in his home, but he escaped to a panic room.

Western governments should stand resolute against those who would blackmail us into giving up our freedoms. No intelligent government should impair the right of free speech to placate terrorists who falsely claim they are victims when they are, in fact, conniving aggressors.

Moderate Muslims and the Credibility Crisis

Most of the world's 1.6 billion Muslims do not countenance violence and human rights violations, but the fact remains that fundamentalists are not a fringe group; they occupy senior positions in Muslim clerical hierarchy. There are tens of millions (or more) of them, and they believe their interpretation of Islam is the only correct one.

Moderate Muslims claim they are being unfairly lumped into this motley crew, but if they are claiming a schism, they haven't been clear about it.

When Martin Luther, a Catholic priest and a theology professor, repudiated two core teachings of the Catholic Church, he acknowledged that, by definition, he was no longer Catholic. He was part of the Protestant Reformation, and his followers are called Lutherans.

Moderate Muslims still call themselves Muslims. But there will never be a Quran 2.0. According to fundamentalists, moderates do not follow the rules, and fundamentalists are correct on this point. Fundamentalists view them as bugs in the program.

Terrorists from many different countries and cultures have banded together in the name of Islam to commit mayhem and murder authorized by the highest levels of Islamic clergy. 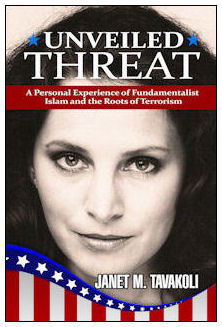 Janet Tavakoli is the author of Unveiled Threat: A Personal Experience of Fundamentalist Islam and the Roots of Terrorism, a newly-released non-fiction book about the current negative implications of Islamic fundamentalism for the United States.