New campaign numbers are out, and available in a variety of search functions and mapping tools on Huffington Post's Fundrace. Now donations in the 4th quarter of 2007 are public.

Hollywood celebrities continue to voice their political support with their wallets. Many gave in the first three quarters, and for more on that go here and here. But as shown a quarter ago, there are still a number of holdouts. However, the new donation numbers added more than a few noteworthy names to the list of givers.

After campaigning for Kerry in 2004, Ben Affleck has finally picked a presidential allegiance. The actor-director gave $4600 to Obama. But a search for wife Jennifer Garner still turns up nothing.

Also weighing in on the election with funds was comedian, talk show host and Huffington Post blogger Bill Maher, who gave $1000 to Edwards' failed bid. Actor and fellow blogger Ryan Reynolds gave $1200 to Obama at the end of 2007.

Actresses have also opened their wallets. Rita Wilson added a 4th quarter donation to Clinton, and has now given $4600 to Clinton and $2300 to Obama. Glenn Close is only playing one side though, with a new $2300 donation to Hillary Clinton. Ellen Barkin has taken the other side with her $2300 donation just to Obama. And funny lady Lily Tomlin added to a previous $2000 Clinton donation with a $500 check to Obama.

And Obama has rallied Hollywood's youth! Raven Symone, known as precocious toddler Olivia on "The Cosby Show" and more recently "That's So Raven," Symone is now 22 and an Obama backer, giving $2000 in the 4th quarter.

On a musical note, Dave Matthews donated $2300 to Obama. Also joining in was singer-producer Babyface (nee Kenneth Edmonds), who has now given $4600 to Obama's campaign. Ex-wife Tracey (recent ex of Eddie Murphy) had previously given $500 to Obama.

For an overview - literally - of how Los Angeles gives, check out the FundRace a map. Here's Malibu, color coded into red and blue by donation address: 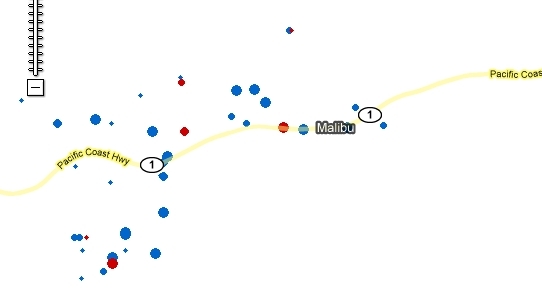 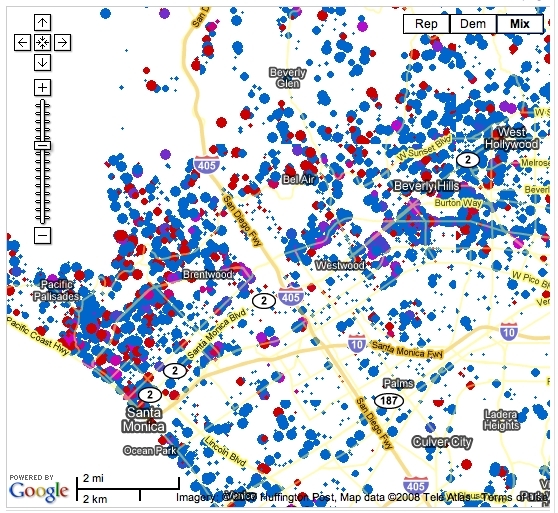 FundRace makes it easy to search by name or address to see which presidential candidates your friends, family, co-workers, and neighbors are contributing to. Or you can see if your favorite celebrity is putting money where their mouth is. Click here to play FundRace.