Fundraising for adoption on Crowdfunding, a website generally used to fund startup businesses, has garnered the attention of bloggers outside the adoption community. Heather Magee, lifestyle and entertainment writer, shared her feelings about the topic:

"My initial reaction was one of shock. How tacky, I thought. But ...Who was I to judge? ... My only concern is if a couple needs to Crowdfund an adoption, are they fit to afford a child in the first place? Or will they take to crowdfunding private school, college and all the rest?"

While this may be a shockingly new phenomenon to those with no expertise or experience with adoption, it has existed for perhaps a decade or more and there is a lot more to it than just being tacky.

The real question is who such fundraising helps and who it hurts.

Churches have a history of encouraging members to support congregants' adoptions. Adoption agencies, too, have long encouraged raising money to pay their fees by seeking help from family, friends and acquaintances. Before the Internet existed, prospective adopters held bake and yard sales.

The ultimate list of adoption fundraiser sites is here and those seeking to adopt can also set up foundations that allows family, friends, and employers to make tax-deductible donations.

The practice of fundraising is so wide-spread some have created businesses to cash in on those who are seeking cash, creating websites such as this and this.

Clearly, the fundraising helps those who receive the money to get what they want. But it also causes hurt to adoptees -- those whose adoption is supposed to put first -- and their families of origin.

Adoptee, Kevin H. Vollmers, agrees with Magee that it is tacky. He also agrees that "if you can't afford it, don't buy it" and says that adoption fundraising degrades and disrespects adoptees by "overshare[ing] their... histories" and in some cases by displaying photos.

TheAdoptedOnes blog agrees that it is an issue of respect pointing out that adoptees are already sensitive to the cost of adoption and knowing your family fundraised would only add to that "sting" and make an adoptee feel even more commodified. "The mere thought that others contributed to save us would have added yet another layer to being an adoptee."

Mothers who lose children to adoption have also expressed distaste for fundraising: Many such mothers are in financial crisis and, like Eileen B., have every reason to believe that home studies ensure adopters are financially stable. They are thus incensed and offended by adoption fundraising. Why would they want their children placed with those who cannot afford to adopt? Why is no one donating instead to help families at-risk, who have never harmed their children, prevent their loss? Why, Eileen asks, is it "acceptable to help a couple in need who just want to have a family of their own" and yet "less acceptable to help a woman in need raise her own child?"

"My personal reasons for giving my son up were money related.... why the hell is no one raising funds for women who would love to keep their own baby? Money is pretty much the #1 concern for women who choose adoption ... Why isn't the woman who is actually giving birth worthy of fundraisers? Why isn't the baby who is about to lose everything they know worthy?"

Is it necessary? Is it Ethical? Moral?

"Adoption fundraising reinforces traditional hierarchies of power and privilege by giving money to the already-wealthy to receive a child into their home, rather than placing vital resources with the original families and original communities that would prevent children from being placed in orphanage and for adoption in the first place... I do not say this to criticize those parents [who adopt], but because those of us with privilege have a duty to be aware of how privilege impacts marginalized people and communities. Not just be aware of it, but to take action to secure social justice."

Some, like Jillian Burden, claim fundraising is "necessary" because fees are so high. But not all adoptions have high fees.

Fundraising is justified because of the high fees and those who donate believe they are helping to save children in need. The fact is, however, that high priced adoptions are a choice that people make and in fact the most altruistic adoptions are easily affordable. Helping the homeless is charitable but would you donate to someone who wanted help paying for a million dollar home when they could afford a reasonable apartment?

Adoptive Families' 2009-2010 survey of average adoptions costs reveals the typical cost of domestic infant adoption, private and agency, runs approximately $20,000 to $40,000 while International adoptions run $25,000 to $50,000 or more depending on travel and other requirements of the country such as donations to orphanages.

Adopting from foster care through a public agency, however, costs $0 to $3,000 and these minimal fees can be recouped through a federal reimbursement or adoption tax credit. In addition, many foster adoptions are entitled to ongoing subsidies (averaging $350 per month). 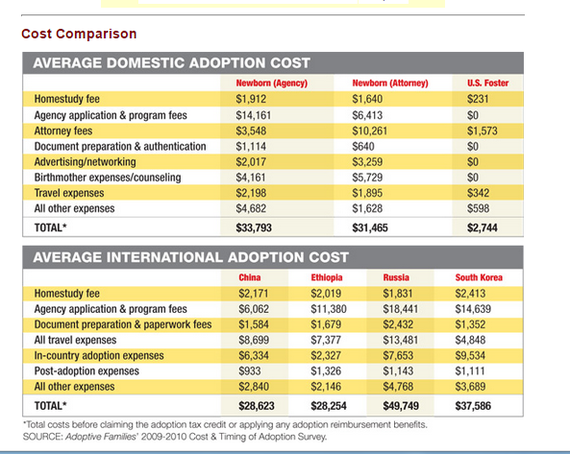 AdoptTogether is a website dedicated to adoption fundraising where donations can be made to the general 'cause' or to a specific family. It boasts to have raised four million dollars for adoptions so far. Four million dollars. Imagine how many families or entire villages that could help. And that's just from one website. 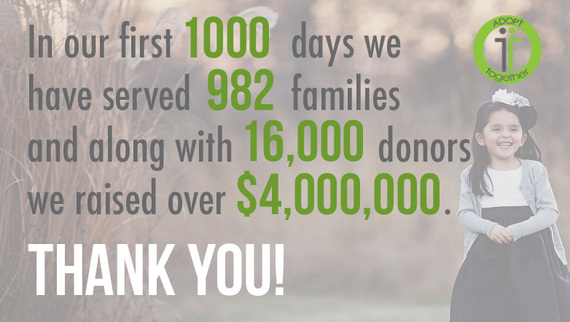 "One adoption fee could vaccinate tens of thousands of children or fund an entire medical center for a village. The average cost to adopt a newborn from a struggling parent could pay the TANF [Temporary Assistance for Needy Families] allowance of a family of four for three years." 'Orphans' and Economics

Those who believe they are helping orphans by donating to support an adoption need to consider the corrupting effect of money especially in impoverished "sending" nations from which many adopted children originate. Cash donations to orphanages are often required and accepted as "common practice" as documented in I Love You (Wo Ai Ni) Mommy. These cash payments encourage kidnappers and child traffickers because orphanages use the cash to pay finders' fees to those who bring in babies claiming they were abandoned. If those who cannot afford high priced adoptions chose other alternatives instead of fundraising, there would be fewer babies abducted to meet the demand.

Ninety percent of children in orphanages have at least one parent and are placed there, temporarily, to provide them with food, medical care, or schooling the family cannot afford. Those who want to help orphans can donate to reputable charities that provide nutrition, water, schools, doctors, and medical supplies to areas in need or, donate to Against Child Trafficking, www.againstchildtrafficking.org/ which helps protect vulnerable families and children.

Fundraising to take children one at a time, leaving families behind, does nothing to ameliorate the underlying issues that adoption exploits, instead it benefits baby brokers and child traffickers who find children to meet the demands for children perceived to be more acceptable than those in foster care.