Whoever coined that term really should get a punch in the nose. Fun for a lucky few with no responsibility perhaps. For the rest of us, it's one step ahead of the reaper, a constant state of destitution and a cavalcade of debasement. There is nothing fun about unemployment, yet still I will try to make a funny post about it.

In June of this year, for the second time in my adult life I joined the fastest growing group of people in the entire country. Those without jobs. Oh sure, I had about a two week period where I truly believed anything was possible. I felt free from the tyranny of stress, the alarm clock and working for somebody else. I can't say I was especially happy at my job. It was an opportunity, sure. And if I had substantial cash reserves, I'm sure it would have been. That's what you feel. Then the mediocre misery of reality kicks in, and all encompassing, pervasive despair, perhaps with a dash of panic, covers you like the wet, warm blanket of Sarah Palin's mental mediocrity.

Your time is not valuable.
Your skills are not necessary.
Others will work cheaper and for longer.
You are not needed. 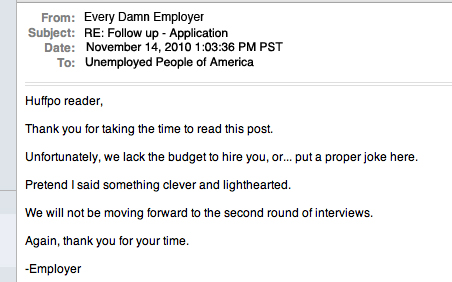 I'm lucky, as a career professional of 13 years, I have on the job experience and an absolutely glowing reference list a mile long. Besides all that, I occasionally even get paid to play rock music in front of people and even write (for free) on this esteemed media outlet once in awhile. I stay busy, and it's only through those latter outlets that i'm able to stay sane.

I've got all of the time to do all the things I've wanted, and if wasn't a mad scramble to pay the bills 24 hours a day, I might actually be able to do them. Let me be clear though: I've got it easy, I don't have a mortgage or kids, many out there have it far worse.

You know all of those reports that come out about the Unemployment rate falling? It doesn't count people that have fallen off the rolls. Seems like a simple thing, but it's the elephant in the room. Instead of coming up with new and more inventive ways to talk about the recession. Perhaps some of that energy devoted to fun new nomenclature could be used to fix the damn problem? 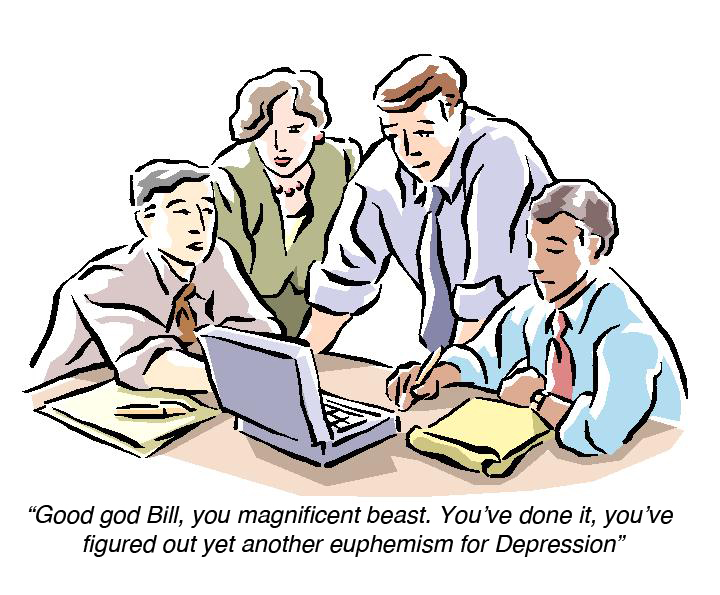 Ah! American Entrepreneurism will kick in, people should just use this opportunity to follow their dreams and start that business they've always wanted to. Except that nobody, and I mean nobody is lending money. Oops.

Is it any wonder the simpleton populism rage of the tea party has so many Americans searching for a vague "other" to pin the fail tail on? We've aggressively worked for years in this country to pretend that class does not exist. So much so, that many poor people think millionaires tax cuts benefit them the most.

I know good people, who are some of the hardest workers you've ever seen. They throw themselves into their work, I would even say they are brilliant. They don't even get a call back from the dozens of jobs they apply to every day, executive management to barista. Their resume are top notch, their references impeccable. No matter, there is no work to be had.

And if there is, and you don't react to the mere possibility of an interview at a job, any job, with the excitement of winning the lottery combined with finding the cure for cancer, it's on to the next candidate.

They will jump twice as high, for half the crumbs.

And that is what we've come down to, the rudderless, careening race to the bottom. That's how we get a "jobless recovery", that's how we get companies posting job positions that don't even exist for the illusion of prosperity. That is how we end up in a situation as truly rotten as this.

Hence the absolute need for unemployment benefits where, Yes, the bills get paid... but one's full time job becomes staying alive. Every meal out a weighted decision, every small purchase at the drugstore given the emotional pressure of what buying a washer and dryer or car used to be in the American of largesse. This is the reality that so many of us deal with on a day by day basis. And it brings the bummer. The cartoon of "Funemployment" is cute but not real for most of us. Especially since the entire floor can be pulled out from the EDD recipient at the receipt of the smallest amount of one time income. It's absurd, it's surreal, it's like a website setup by your grandmother.

It's not right.
I'd like to think that we live in America where if you want to work, you will be able to work. Not so. All of those exported jobs have done a great job creating economic prosperity elsewhere, but with all of the obsession with foreign policy and high minded exportation of American ideals, somehow, someway, we downplayed attention towards our own people.

This post is for all of us, the tired, the poor, the huddled masses.
For those whose hope is waning, for those that have lost hope completely.
For the people that are made to feel completely without worth because of happenstance. For the people that wake up angry, sad, desperate, and hollow every single day.

So how do we change this?

We can start by admitting we have a real problem. Instead of telling us how things are getting better, when we see the opposite. Call it like it is, in real terms. Don't blame, solve. We start there and figure it out.

How?
I don't know. But it sure is a hell of a question isn't it?
And as long as I'm alive, I'm going to ask it, I certainly have the time.