This past Monday, a funeral procession over 100 strong trudged solemnly towards TransCanada's offices in Westborough, MA. Dressed in black and carrying paper flowers, the mourners sang a chilling dirge:

They were a somber sight, but no observer could miss the determination in their eyes. The pallbearers brought a large coffin right up to the doors of the TransCanada office and gently set it down. The words "Our Future" emblazoned on the coffin revealed the subject of their mourning.

These students, youth, mothers, elders, and clergy held this "Funeral for our future" in the hallways of TransCanada's office building to protest the Keystone XL pipeline. Twenty-five of the mourners were arrested for handcuffing themselves together and refusing to leave. This action was yet another moment in the escalating resistance to the controversial pipeline, which would stretch from the tar sands in Alberta to refineries in the Gulf Coast. 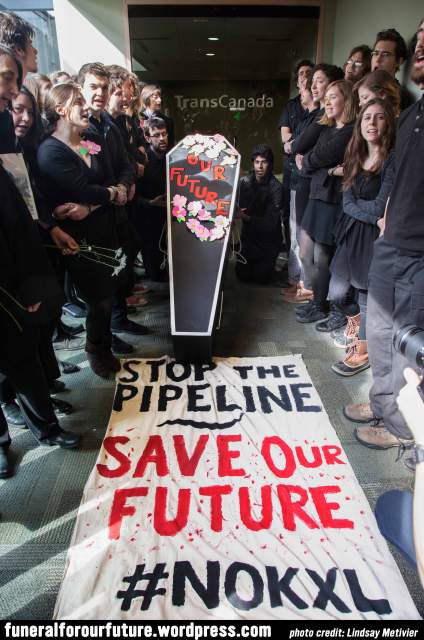 The Keystone XL pipeline running through America's heartland will carry a special kind of fuel, known as diluted bitumen, which is notoriously unsafe and prone to causing spills that we do not know how to effectively clean. Nevertheless, the proposed pipeline will carry this corrosive fuel directly over America's most important aquifer, threatening the drinking water of millions of Americans.

Proponents say the pipeline will create jobs. Not really. In all, it could create only an estimated 35 permanent US jobs according to the State Department. A Cornell report puts that number as low as 20. Meanwhile, the pipeline directly threatens the jobs of thousands of farmers and ranchers and shunts resources away from developing clean energy infrastructure, innovation, and the jobs of the future, today.
Proponents say it will improve our energy security and help gas prices, but this, too, is false. A key purpose of the pipeline is for exports, and even the inadequate State department draft Supplemental Environmental Impact Statement admits that this project won't positively impact energy security.

Fortunately, America's defense system has been activated. Resistance has sprung up, and it's growing. Our movement, led in large part by students and young people, is concerned about all of these things that Keystone XL threatens. Yet, perhaps most of all, we fear for our future. We want to be able to live and raise children in a world free from the most devastating impacts of climate change. Is this too much to ask?

I was honored and humbled to play a part in Monday's action. Not because I'm a radical who loves arrests, but because, faced with the combination of a lame-duck government and an existential crisis, I now understand them to be necessary. More and more people feel the same. If we felt we truly had a choice, we would stay at work or school, rather than risking our careers. Especially in this economy, none of us want an arrest record. But we do want--and deserve--a livable future, and we will fight for it. From across the border in Alberta at the site of extraction to Texas, to Massachusetts, to Washington DC, people are mobilizing. Front-line communities have stood up, and inspired others to do the same. We have become a force to be reckoned with, and we will not back down.

And we, the youth, will remain among the forefront of this movement, putting our bodies on the line for our generation, and all generations to come.

In the hallway to the TransCanada office, the pastor gave the eulogy. Tellingly, her tone transitioned quickly from mournful over the loss of our future, to a defiant call-and-response pledge of resistance.

"We are here to hold TransCanada accountable," the mourners pledged. "We are here! We will stay! Until this deadly pipeline is stopped!"

America will have to come to terms with this reality, and be reconciled with the fact that the resistance to this pipeline is not going anywhere but forward. We will continue to grow as a non-violent movement, and do everything in our power to stop this pipeline and protect our future.
This truth is summed up, perhaps perfectly, in the last verse of our funeral song: