Did you think the world was done with Furby? Because you were wrong.

The tiny toy that probably kept you up at night in the late '90s has come back (again, after a previous comeback in 2012) with new accoutrements, Business Wire reports.

The new Furby Connect has enormous LED eyes like a baby Pixar character, even larger ears, and a clear, light-up joystick coming out of its head. Much like the old Furby, it still makes strange noises and offers quasi-responsive facial movements, but it now does those things with the help of an app.

The 2012, Furby brought us app connectivity, and this 2016 iteration takes the toy/app pairing to the next level. Furby Connects can tell their playmates what songs are trending and videos are viral with occasional push updates via Hasbro's app. The app lacks location awareness as a way to protect the privacy of families using it.

Outside of app content like games and kid-friendly entertainment, the new Furby can also digitally eat, lay eggs and poop -- like a Tamagotchi you can physically touch, but don't actually have to clean up after.

Much like the original Furby, if you put two Furby Connects together, they can chat with one another. You can enjoy their strange wiggling and baby burbling in all their glory.

There’s a new friend that can’t wait to wake up and meet you. 🙃 #FurbyConnect

The best part of the new Furby is that, to quote Samuel L. Jackson, it goes "the f**k to sleep." The toy comes with a sleep mask that mutes the Furby so you can stash it away when you're ready to tuck in for the night and not be woken up by creepy noises.

You can snag a Furby Connect for $99.99 on pre-order in pink and teal here, with more colors to come in the fall.

We were over our OG Furby a week after getting it, so no promises you or your kid will love this new one. That said, we're happy the world is weird enough to keep pumping these things out. Everyone deserves to experience a Furby.

Go forth and prosper, you furry toy gremlins.

'90s Kids, Rejoice! The Furby Is Back (And Still Kinda Creepy)
5 Smart Toys For Your Children 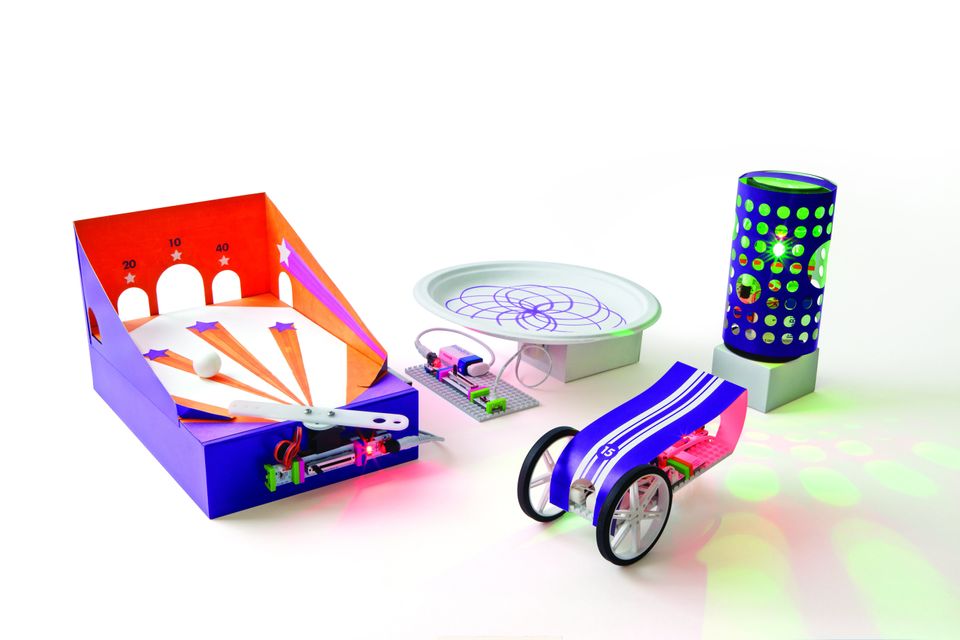 1 / 5
littleBits
Although circuit-building sets have long been around, LittleBits takes inventing and building electrical-powered devices to a new level. The brightly colored components connect together easily with magnets, then attach to mounting boards like Legos.<br><br>It took me about 45 minutes to build a remote-controlled car. The instructions include color pictures of everything I needed to see. I found them easy to follow, and older children should, too. Although I didn't get everything right the first time, I had fun checking my circuits and solving problems. Kids will as well.<br><br>Other projects in my set include a wireless doorbell, motorized fan and rotating lamp.<br><br>One drawback: There aren't enough parts to make multiple projects. The kit has two mounting boards, and I needed both to build my car and remote control. Because the boards are needed for most of the projects, you have to take apart what you built to make something else.<br><br>To get around that, you'd need to buy expansion packs with extra boards and parts.<br><br><i>--&nbsp;$200 for Gadgets &amp; Gizmos set, ages 8 and up.</i>
littleBits