More than 1 million federal employees face the possibility of unpaid time off due to the across-the-board spending cuts. While some notices are going out on Friday, the furloughs will not actually take effect until April, as the government is required to give employees 30 days' notice.

The Democratic staff of the House Oversight Committee released a furlough notice sent to an assistant U.S. attorney on Friday, which read, "This memorandum notifies you that the Department of Justice (DOJ) proposes to furlough you no earlier than 30 days from receipt of this notice."

"We recognize the difficult personal financial implications of any furlough, no matter how limited its length. We will make every effort to keep you informed as additional information regarding agency funding becomes available," the letter added.

The sequester contained in the Budget Control Act of 2011 was originally intended to be so painful -- $85 billion in across-the-board cuts to both domestic and defense spending -- that Congress and the White House would work together to come up with an alternative plan to reduce the deficit. If they didn't, the cuts would kick in, as they will on Friday.

"This is no longer an abstract concept -- these documents show for the first time in concrete terms that sequestration is real, it’s here, and it’s incredibly damaging," said Oversight Committee Ranking Member Rep. Elijah Cummings (D-Md.). “With every passing day, more and more letters like these will be sent to hundreds of thousands of federal workers, and Americans across the country soon will begin experiencing firsthand the deterioration of critical services they rely on every single day.”

During his press conference on Friday afternoon, President Barack Obama tried to counter some public officials who have said that the administration is overstating the effects of the spending cuts.

"The Department of Defense right now has to figure out how the children of military families are going to continue with their schooling over the next several months, because teachers at these Army bases are typically civilians," he told reporters. "They are therefore subject to furlough, which means that they may not be able to teach one day a week. Now, I expect that we'll be able to manage around it. But if I'm a man or woman in uniform in Afghanistan right now, the notion that my spouse back home is having to worry about whether or not our kids are getting the best education possible, the notion that my school for my children on an Army base might be disrupted because Congress didn't act, that's an impact."

Each agency is grappling with the cuts differently, and some have said they are able to absorb the cuts without furloughing employees.

On Thursday, the Social Security Administration sent a notice to all its employees saying that it was taking steps to "minimize the risk of furloughs," including limiting future hiring.

A HuffPost reader who has worked at the Bureau of Land Management for about a decade sent along a memo given to all employees on Wednesday.

Mike Pool, the acting director of BLM, wrote that the agency was implementing a hiring freeze, "offering Voluntary Separation Incentive Payments and Voluntary Early Retirement Authority (VSIP/VERA) to a wide range of our employees," cutting travel for staff and reducing contracts and agreements.

"But even with these efficiencies, we are likely to require furloughs of permanent employees across all of the BLM," added Pool. 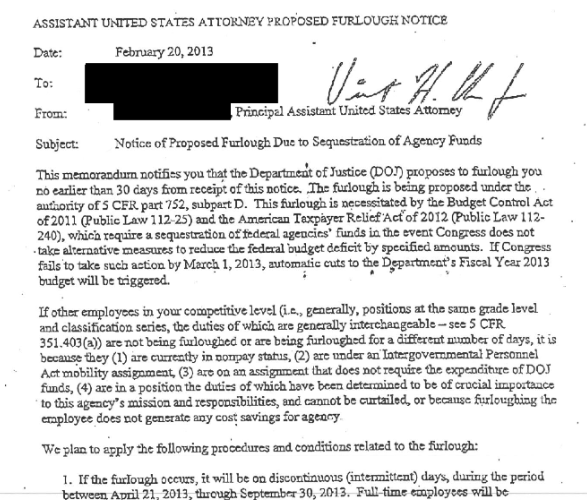 
A Message To All SSA Employees


I want to share with you the latest information we have regarding our operating budget. I know sequestration is on all of our minds.


Clearly, this is a challenging time for us all. I want you to know that, here at SSA, we will work to minimize the risk of furloughs that would further harm services and program integrity efforts in the event of a sequester. This includes making some very difficult decisions and taking necessary steps to mitigate our budget risks this fiscal year -- including steps such as restricting hiring, limiting overtime availability, delaying purchases, and limiting agency travel. We will also be restricting our spending to mission critical activities. By taking these actions, we are hopeful the funds available to us will allow us to operate without furloughs.


On March 1, we will continue to serve the American public. I recognize and appreciate all you do to keep service to the American public our number one priority. Thank you for your continued commitment. I will keep you informed of developments.

Are you a federal employee who received a furlough notice? Please send it to us at openreporting@huffingtonpost.com. We will keep your personal information private.

CORRECTION: A previous version of this article misidentified the Bureau of Land Management.