Although the House voted Saturday to provide back pay to furloughed federal workers once the partial government shutdown ends and the White House supports retroactive pay, the Senate has yet to vote on the measure.

More on CNBC:
- Boehner: Shutdown is ‘not some damn game’
- First a default, then a depression?
- Cramer: Stock market could get very ugly

With no end to the shutdown in sight, workers like Coleman are unsure when their next paychecks will arrive.

To make a few bucks, Coleman, who works in IT at the Department of Defense's Defense Acquisition University, turned to Craigslist in hopes of selling some baby items she no longer needs.

"Prices can be negotiable, but please serious offers only, I really need the money," says the listing, which advertises about $300 worth of items.

Coleman's in a bind because she recently spent all her savings to get her house ready for sale and hadn't saved up for the partial government shutdown.

"It's not looking good," she said. "My husband works, but I make the most money so it's going to be tough."

Coleman is far from alone.

As the shutdown drags on, many government workers have taken to resale sites, such as Craigslist and eBay, to sell sporting tickets, designer clothes and more.

Platforms such as TaskRabbit, which allow people to perform household errands and other tasks in exchange for money, also are seeing a boost in interest.

"A few dozen government workers have applied and some are already running tasks," said Johnny Brackett, TaskRabbit's senior manager of marketing and communications. "The backgrounds vary from male to female, from government agencies, to other jobs."

"What's very interesting is this week we saw an all-time high in TaskRabbit applications—over 13,000 in a single day," Brackett added. "To put that in perspective, we currently have just over 15,000 active TaskRabbits total, across all of our 15 markets."

While the company doesn't know what percentage of these are furloughed workers, Brackett said it's "safe to assume a significant percentage are."

Just eight months ago, Richard, a federal contractor who asked to be identified only by his first name, paid $1,200 for a Yamaha custom five-piece drum set. Now he hopes he can get $500 for it on Craigslist. 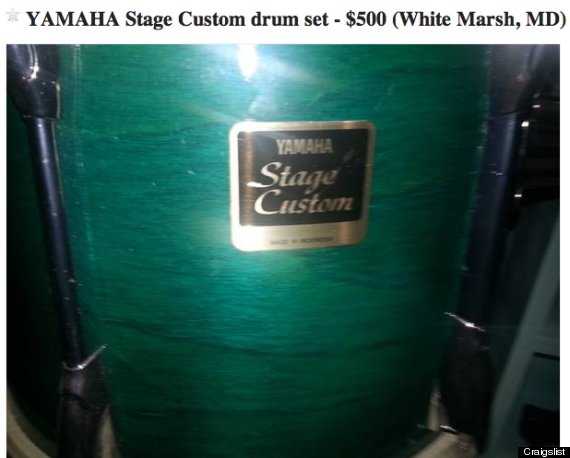 As his unpaid days multiply, Richard is getting nervous. As a federal contractor for eight years and a federal employee for the previous 17, he's not new to congressional wrangling.

"If this goes too much longer, I may have to leave the industry," he said. "I've been working in the industry 25-plus years. ... It's very stressful. I had open-heart surgery in 2008, and stress is not good for me."

So far, he's turned to online surveys to earn money, and he and his wife have cut their spending.

"Normally we get one night out a week," he said. "We had to stop that. We're pinching pennies and scouring coupons like crazy. We're going to have to cut back on what we normally pay on our bills."

For many, including Natalie S., who has worked for the government since graduating from college six years ago and requested that her last name not be published, the uncertainty about the duration of the shutdown is what's causing nerves to rattle.

"I'm a worrier to begin with," she said. "I don't know if I'm going to have to weather it for a couple weeks or a couple months."

In part due to uncertain finances and not having "much else to do," she turned to Craigslist to unload a bookcase with books, ironing board, rain boots, down blankets and a $15 sign reading "Bienvenue," French for "welcome." 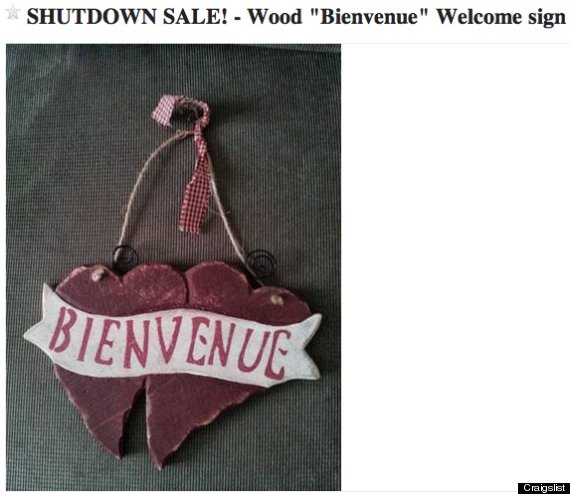 "I still have at least a month or month-and-a-half in reserve," she added. "My parents have called and said they're happy to lend me some money."

Lisa Braswell, a management analyst at the National Institutes of Health, said she's giving herself two weeks before she "pulls the panic alarm."

Since the furlough, Braswell listed 28 items on eBay, mostly high-end evening gowns, with an estimated value of $15,000 to $20,000 to clean out her closet. 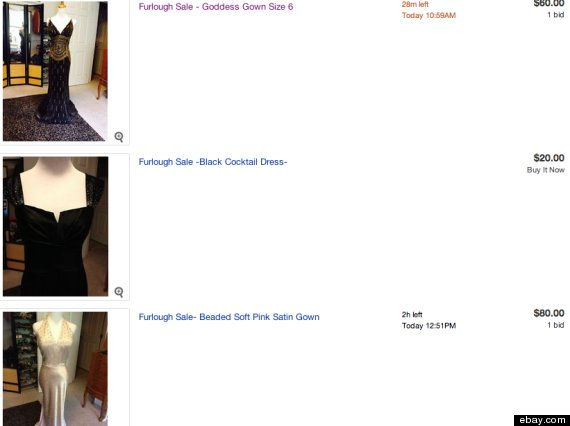 "It's the unknown that's concerning," Braswell said. "A week or two—I probably won't think about the money, but it's that question of not knowing when it's going to end, particularly with the holiday season coming up."

A government worker for five years, Braswell never expected negotiations in D.C. to unravel into a shutdown even after she and her co-workers were urged Monday to take their plants home.

"We were all looking at each other as if we saw a ghost because we'd been through the drill a few times, but it had never happened," Braswell said. "And I really don't believe the majority of my co-workers expected a shutdown—I know I didn't." 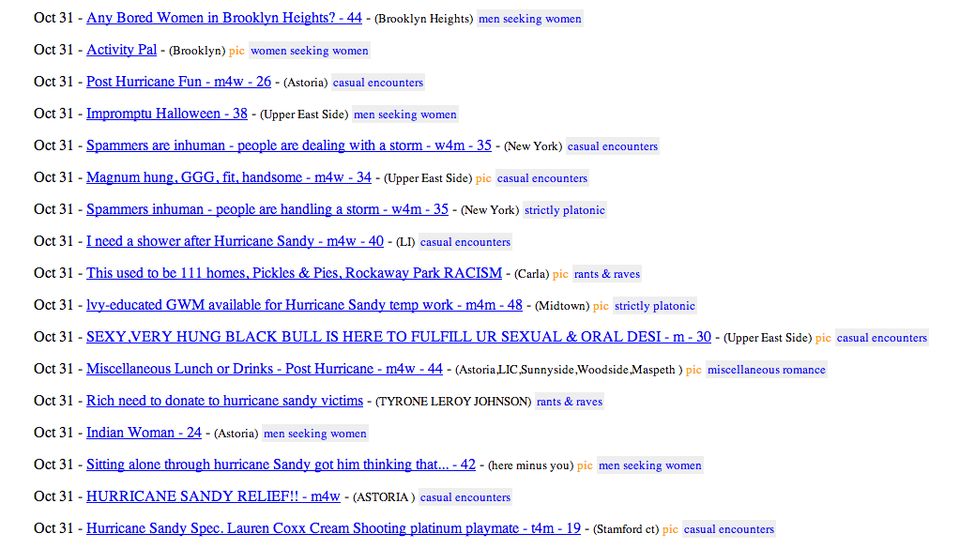 1 / 10
Bored Women Still Popular For Sex
Here's the good news. If you're a <a href="http://newyork.craigslist.org/brk/m4w/3377294562.html">bored woman in Brooklyn</a>, there are still men who want to hook up with you, even after Hurricane Sandy. That's probably also the bad news. Also, there is a "Magnum" hung gentleman on the Upper East Side. He's handsome.
Craigslist