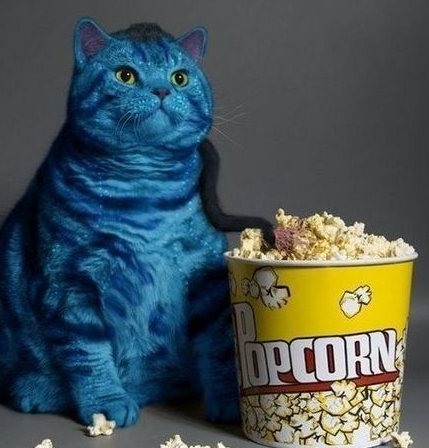 Imagine aliens from planet Zârtôk responding to our deep space signals by sending a furry ambassador bearing great wisdom and technology to share along with insights into how to create a balanced global culture where all beings thrive equally.

Pausing before making her presence known, she tunes into the news feeds for an Earthly update and discovers that the largest developed nation on this world is seriously considering electing a reality TV star with no experience and the consciousness of a three-year-old as their leader.

What's a self-respecting alien to do?

Firing off a quick FTL message saying "Nobody's home," she mixes up a big batch of Orville Redenbacher's finest, sits back and prepares to laugh her 400-year old furry blue ass off.

But do we do that? Nooooooo! We take this shit seriously. Me included. But no more!

Yes, I've taken great delight reading about The Donald's daily gaffes and melt downs. I post crap on Facebook and get annoyed when somebody points out Hilary's shortcomings on my page. Really? Grandma has an itchy trigger finger and will blast the world into a nuclear wasteland 20 days after the election? Somehow I don't think so.

But I'm losing my point. (See how easy it is? How seductive opinions, positions and posturing are?)

Look, I get it. It's deeply satisfying making fun of somebody who makes fun of vets with PTSD and handicapped reporters. Payback's a bitch. And it makes us feel good about ourselves in comparison. Yet let's stop and take a deeper look at this.

Never in recorded history has anybody set himself up the way Trump has.

The Biggest Ego on the Planet, proudly displaying his egoism and the most despicable traits of humanity like medals on his chest--bigotry, disdain, judgment, condemnation, vulgarity, sexism, dishonesty, self-importance, mercilessness and callous indifference to the welfare of others and the planet--is being globally harpooned as a joke, minute by bloody minute, for all of us to see.

It's popcorn-worthy spectacle. But if we don't appreciate it for the gift it brings and acknowledge what's really going on we run a great risk of repeating the spectacle in the future. Because if we take this race seriously and our judgments of Trump (and Hilary) seriously, and keep the game of lampooning and FB posting and political hysteria going, we're operating at the same level and climbing into the same boat with them.

I can't tell you how much it hurts saying this but: Me sitting around judging Trump, making fun of him, makes me no better than Trump. Same thing with Hilary.

Damn I wish it weren't true, but it is.

Does a high school senior belittle a kid in second grade because he's less mature? Mean? A playground bully who wants all the toys? No. The senior may not like the actions and attitudes of that second-grader, but s/he understands them as less evolved actions and attitudes of a less mature mind that must be compassionately educated so the kid grows up into a healthy, fully-realized adult.

If there's anything science teaches us, it's that the patterns of life repeat themselves. The macrocosm is reflected in the microcosm and vice versa. Consciousness evolves every bit as much as physical forms do. The Trump second-grader analogy reflects where he is on the macrocosmic scale of humanity's potential consciousness.

Displaying the ignorance of children, we believe we've reached the pinnacle of human expression. Yet the ambassador from Zârtôk would tell us (given a chance and some open-minded brains to work with) that we're nowhere near the end of the evolutionary line either mentally, emotionally or physically (thank God!).

She'd tell us planet Earth is populated with a LOT of second-graders. Second-graders who vote. And that it's the job of the seniors to wake up and realize the situation, get out of the sandbox and find ways of elevating the playground conversation and rules.

How we do this, I'm not sure. But swallowing the Blue Pill every morning along with our coffee as we rush out the door to get to work to keep the "business as usual" insanity going--eating popcorn as the Titanic slips beneath the waves--ain't it.

Of course, the alien thing does have it's appeal. I've been watching Ridley Scott's latest political TV satire Brain Dead. And I have to say the premise of space-invading insects in Washington D.C. crawling into people's ears and eating their brains, deleting their morals, compassion and ability to think freely makes total sense.