Let me give you five eye-popping reasons why this was one weird week:

1. We found the oldest person . . . perhaps in the history of recorded time! Best of all, Carmelo Flores Laura is a bit of a party boy. He doesn't drink, but he does spend his days in the Bolivian highlands chewing on coca leaves as a "mild stimulant." Of course, with a little processing, coca leaves can be turned into cocaine, and that certainly keeps you going. (Pictures of this amazing man will also keep you going.)

Guinness World Records has yet to verify Mr. Laura's documentation, but the oldest verified age was 122 years, 164 days. That was achieved by Jeanne Calmet of France, who passed away in 1997. She taught the world that you can get by smoking for nine decades so long as you limit yourself to two cigarettes a day. In other words, she was no angel either.

2. Warning, Fellas: Skinny dip at the risk of your own testicles.

That's what Scandinavian authorities were telling swimmers at the Strait of Oresund. Pacu -- a piranha-like fish -- have been spotted in the waters, and these South African aquatic creatures love munching on nuts. When they can't find the type that fall from trees, they go for the type that hang from dudes.

Pacu attacks are rare, though these fish are said to have caused two Papua New Guinea fisherman to die, perhaps in the worst way possible. It's unclear how this freshwater breed is traveling to cold water locales like Sweden and Denmark, but they also caused a scare last year in an Illinois lake. Some believe tropical fish enthusiasts are to blame.

The good news is that ladies can still skinny dip risk-free. And if you don't like swimming with the boys, pacu are your friends.

3. If you want to indulge in an alternative lifestyle where you dress up like a school mascot, and even have sex with other furry human friends, we at HuffPost Weird News salute you. Our shot glasses runneth over with bourbon.

But if you're a man who dresses up in a dog costume and gets arrested for having sex -- multiple times -- with a cat, you can go bury your bones at the nearest state penitentiary.

Ryan Havens Tannenholz -- a 28-year-old self-described "furry known in the community as "Bubblegum Husky" -- is charged with crimes against nature and animal cruelty. Authorities aren't saying how they allegedly caught him having sex with a cat, and we don't want to know (OK, we kind of do).

Let's just not mistake Tannenholz alleged actions with other fine people who go to work, raise families, pay taxes, and dress up like puppy dogs and kitty cats in their spare time, sometimes as a sexual indulgence. (Read More) 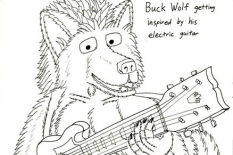 Reporter's Note: There's a furry out there known as "Buck Wolf." Let me assure the Huffington Post community that the Buck Wolf who wrote this piece is not that Buck Wolf. But if you are that Buck Wolf, please contact this Buck Wolf as soon as possible. We have a lot to talk about.

4. Love comes to everyone ... sometimes in the form of a heart-shaped potato. 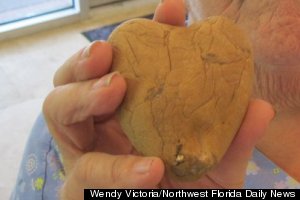 Sally Colburn lost her husband, Jack, in May, not long after their 50th anniversary. The 70-year-old Florida woman reached into a 10-pound bag of potatoes recently, and just knew she had received a message from heaven.

"I know it was a sign from him," she told the Huffington Post's David Moye. "I had been missing him."

Colburn had found a heart-shaped potato. "He was from Alabama," she said. "He was raised on potatoes."

Some men send flowers. Some send chocolate. Rarely are they ever received by a woman who will love them as much as Sally loved Jack.

Please forgive our moment of sentimentality. At HuffPost Weird News, we're usually more likely to cover the woman who gets arrested pulling off her shirt at a Florida bar, cursing out police, while screaming "It's Titty Time!"

5. HuffPost Reporter David Lohr had spent a long time covering Jodi Arias . . . too long. In fact, he was going a bit bonkers.

One day I asked Lohr what he did all day, and he said, "I listened to a recording of Jodi Arias orgasming during a phone sex tape that they played in court." 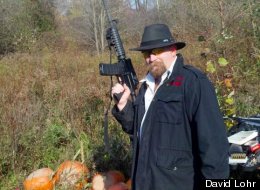 I knew David needed a break. Something different . . . like jumping into a 60-ton tank and crushing a car. Anyone who has seen what this guy does to pumpkins after Halloween understands perfectly well that it's just David Lohr being David Lohr. (Read More)

And what did we drink to this week on HuffPost Live? Titty-Tank Time!