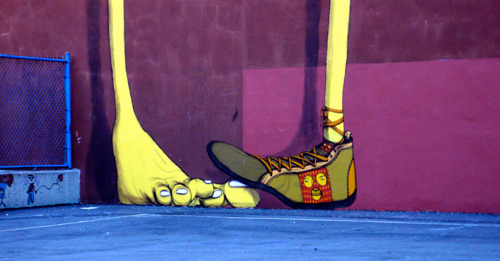 A "Gigante" painted kid with one shoe was given this week to New York by a hometown hero and two imported Brazillian Street Artists. The 80' tall mural by Futura and Os Gemeos on the side of a public school (P.S. 11) in Chelsea features the yellow character with a green patterned shirt and a pair of shorts made out of the world's flags. 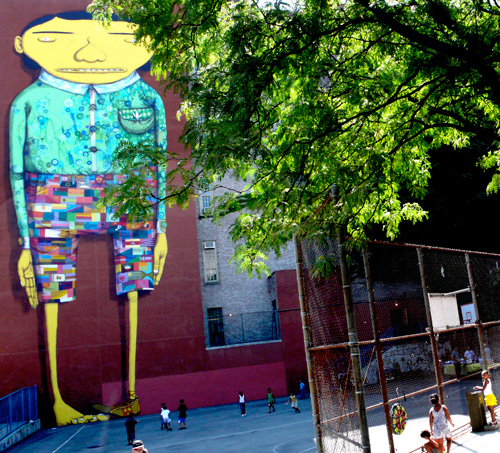 The twins, Otavio and Gustavo Pandolfo, began their infatuation with graffiti and street art as boys in the mid 1980s in Sao Paulo, poring over and imitating graffiti in books from New York like "Subway Art" by Henry Chalfant and Martha Cooper. By that time the homegrown Futura had already parlayed his graffiti on NYC trains into becoming a "downtown" and international gallery art star, hanging out with Jean Michel Basquiat and Keith Haring and painting live on tour with The Clash.

Flash forward 25 years and author/photographer Martha Cooper is right here again -- this time taking photos of two distinct generations of Street Artists. Using materials that are signature for Os Gemeos -- latex house paint, rollers, and spray cans -- the brothers laid down principal elements of the design before improvising on the interior with Futura.

If it seems like you just saw Os Gemeos painting last month in San Diego, and before that in about 10 other countries, that's because you did. We asked Otavio during a break about taking a break from touring. He responded, "Yes we don't rest. We like to paint and that's what we do". Brooklyn Street Art: You began your career in NYC in the 70's. Futura: 1970, exactly 1970, forty years ago. 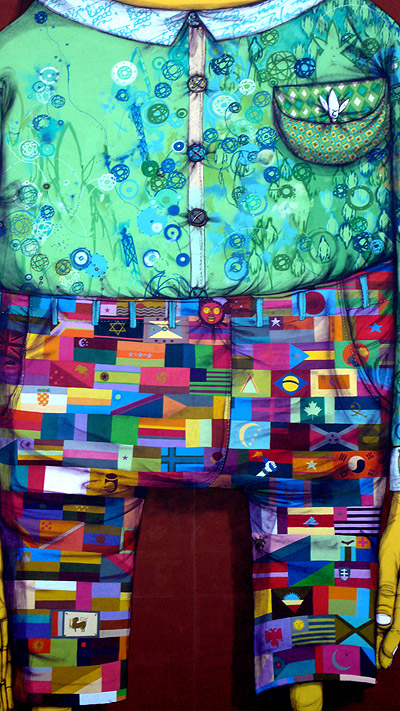 BSA: You've created work on the subways, streets, gallery, and even on stage. Can you talk about your personal journey and the transitions from graffiti to street art in New York? Futura: Yeah well I mean at that time there was really no point of reference. There was very little what we would actually call "street art" in the sense of what we know today. No stenciling, no grand murals, no Os Gemeos, nothing. So it was very limited and the art form, if you will, was very primitive.

The styles developed in New York in the 70s and in the 80s are the architectural foundation of what kids all around the planet are doing right now because the books have been made and the books are the modern Bibles for this culture.

BSA: Can we go back to '81? You did live painting with The Clash -- while you were painting on the stage were you collaborating with them? Were you being influenced by the music or were your paintings influencing the music -- or were you autonomous? Futura: We were just doing our own thing. When I met The Clash here at that time they kind of fell in love with New York again. I mean when they came here in '81 the Hip Hop thing really began to happen here in New York with different groups from uptown and many rap acts were beginning to emerge. When The Clash did their shows on Broadway they opened with hip hop performers for their show. I'd been asked to paint a banner that said "The Clash." That's when they invited me to go Europe with them and asked me if I wanted to paint on the stage while they were playing. I mean when I first met them I wasn't into punk music. 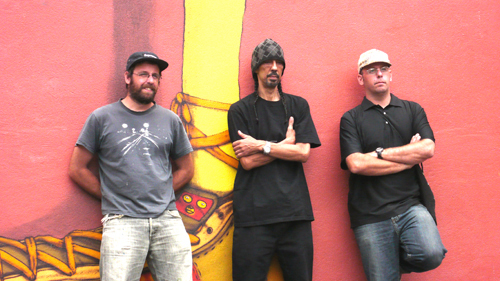 BSA: What music were you listening at the time? Futura: I was listening to Hip Hop, R&B, Motown, you know I'm an old-school guy for that, so The Clash sound was new and I was learning about the music and I liked the music. But it wasn't like "Paint for the music." They were like, "Yo, just do what you do and we are going to play," and that's how it was. I did some graphics for them for the record ("Radio Clash" single) and I actually went on the stage with them in Los Angeles when they released their next album, "Combat Rock." I sing on the record with them and rap on "Overpowered by Funk."

From "Overpowered by Funk", by The Clash and performed by Futura

BSA: Gustavo, what motivates you personally when you are painting and you see people are admiring ...when you go home and go to sleep how do you feel about your work? Gustavo: We don't know how to talk about this because we are very "inside" of our paintings. It is difficult for us to go outside and see what is happening. But we know that a lot of people are happy with the work we do. They like it. We know the people are feeling happy, like the neighbors here, they really love it. You know, New York back in the days was more colorful. Now everything is grey.

BSA: So is that why you paint so colorfully? Or is it because you are from Brazil? Gustavo: The cities have to be all colors. The whole city has to be in color. Everything, the streets, everything. 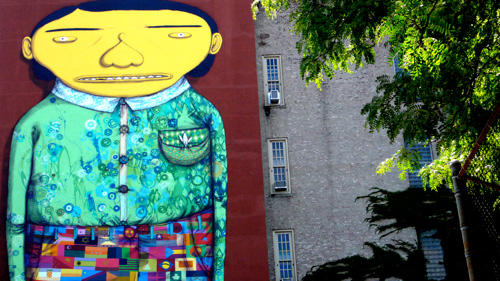 BSA: Futura, can you talk about this project with Os Gemeos and how it has been for you? Futura: The beauty of this project for me is the sense of collaboration that normally doesn't totally exist among artists. I won't say it's the first time I've done collaboration, but it's the most amazing collaboration I've done. I mean in the past I've worked with other artists on walls but not with the same respect as I have with the twins.

A more extensive version of this interview can be read here on BrooklynStreetArt.com

This project is made possible with the vision and elbow grease of AKANYC and 12ozProphet and the engaged involvement of PS11 and the community.