People spend a LOT of time in elevators and, over the years, that time can really add up. If you work in an office building in New York, for example, it's estimated you'll spend almost 16 years waiting for an elevator and about six years inside one.

And while that's great for people who don't enjoy their jobs, one company, called ThyssenKrupp Elevators, is trying to speed things up, and possibly changing the future of city landscapes and urban living while they're at it.

Introducing the ThyssenKrupp "Multi" elevator -- the first cable-free elevator that will use magnetic levitation and a linear motor -- similar to the technology used to operate trains -- to move elevators both up and down, as well as side-to-side.

Watch the new elevators in action:

Elevators have been around since Roman times, but "modern" elevators (aka the ones we see in office buildings now), were designed by Elisha Otis in the 1850s. Over the years, elevators haven't changed dramatically, which means we're basically all still waiting on the same, cable-dependent elevators from long ago.

According to the company's press release, the Multi elevator will take up less space, increase elevator capacity by 50 percent and make wait times much, much shorter. The new technology will make elevators sort of like an efficient subway system, bringing "near-constant access to an elevator cabin every 15 to 30 seconds." 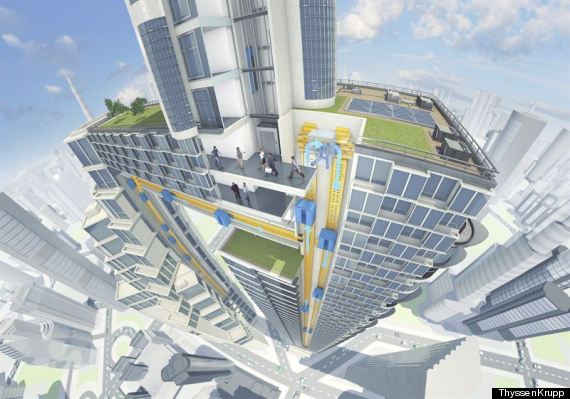 The company boasts that its new design also eliminates "limits in height, shape and mobility" when it comes to the construction of buildings. We're just excited about the prospect of zig-zagging our way across future skyscrapers, shopping malls and apartment buildings.

ThyssenKrupp says that Multi will be available in test buildings as early as 2016, and we're left with only one concern: With elevators this fun, who will want to take the stairs?

The Best 2021 Advent Calendars To Buy Before They Sell Out

Are Waffle Weave Towels The Way Of The Future?

If You’re Even A Little Bit Into Fall, You Need These 49 Things

The Most Popular Shows On Netflix Right Now Besides 'You'