It takes only a few hours on a beach on the Greek island of Lesbos to understand the enormity of the current refugee crisis sweeping Europe and the many dangers that refugees face, including so many mothers and children.

On one typically busy day, our Save the Children staff counted 22 small rubber dinghies arriving in just five hours -- filled with babies as young as three months old and adults as old as 76. While no Greek official was on shore to meet the refugees, volunteer aid workers, including Save the Children staff, were there to assist and guide them toward registration. The numbers of people arriving in Greece this year is staggering -- up from 40,000 last year to 580,000 so far this year. During one five-day period last month, 48,000 new arrivals -- or nearly 5,000 a day -- came to shore.

I recently visited the north shore of Lesbos and talked with a number of refugee families arriving by boat. One woman I met from Syria was traveling with her little girl, little boy, and two brothers. Her husband was left behind in Syria and was hoping to meet them later. We helped guide their boat to the shore and pulled them out of the water, and she said she couldn't believe they were alive. She was so cold and overcome by emotion, she shook violently. We wrapped her in a space blanket and one of our workers offered her his scarf. Slowly, as we gathered warm clothes for her children, she stopped shaking and even smiled weakly as her daughter showed off her warm jacket.

I also visited the two informal camps outside the island's capital city of Mytilene, where refugees must register to continue their journey to Europe. One camp was originally for Syrians and the second camp for other nationalities, the majority of whom are from Afghanistan. Our staff met several teenagers making the trip by themselves. One boy from Afghanistan was traveling with a small group including four other teenage boys. They were trying to get to Germany, where one of the boys had a brother. No one knows precisely how many children are making this journey alone, but recent estimates put the number in the tens of thousands and is growing rapidly. Recent figures from the Serbian government, for example, show that nearly one in four refugee children arriving in Serbia in recent months have been unaccompanied.

While the international community continues to struggle to find a solution to the conflict in Syria, now approaching its fifth year with no end in sight, the sheer numbers of desperate Syrian citizens are staggering. Four million have fled the country and over 7 million have been forced from their homes but remain inside Syria.

Almost 3 million Syrian children are not in school, including half of those who have fled to neighboring countries. As Secretary of State John Kerry noted last week, "Imagine what it would mean for America's future if the entire public school systems of our largest cities -- New York, Chicago and Los Angeles -- were suddenly to close and stay closed." Schools, in fact, are among many public institutions that are in shambles. More than 4,000 attacks on schools have taken place in Syria since 2011, according to the U.N. Meanwhile, two of Syria's neighbors, Lebanon and Jordan, are reaching their breaking point in assisting Syrian refugees.

What can we do? Save the Children has joined other major aid agencies in calling on national governments to adopt a bold new deal for refugees. In the short term, we need to provide much more support in the region in terms of food aid, employment, medical care and education so more refugees will not feel compelled to leave the region and reduce the current huge migration to Europe. In addition, we need to eliminate many restrictions that leave refugees living in limbo -- in constant fear of arrest, detention and deportation.

We also need a special focus on children. Donors need to take additional steps to ensure that children are protected and educated. Otherwise, we face the prospect of helping create a lost generation of Syrian children. Investments now in education and protection for these children can pay enormous dividends once the war ends and rebuilding begins. 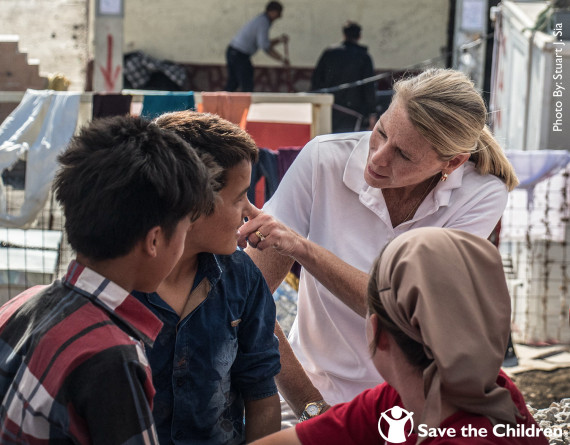 In recent months, we have seen growing support from individuals and corporations to assist refugees. In early September, the worldwide dissemination of a photo of a little refugee boy drowned on a beach in Turkey helped people see this crisis as a human tragedy that is affecting tens of thousands of innocent children and their families. Our long-time corporate partners, such as Johnson & Johnson, stepped up their support for our humanitarian response for refugee children.

With the recent attacks in Paris, we are presented with very hard choices. Our sympathies, of course, are with the hundreds of families around the world who lost a loved one in the barbaric events of November 13.

But we can't turn our backs on the Syrians who are also fleeing death and destruction in their country. By continuing to increase humanitarian support in Syria, in surrounding countries, and for the hundreds of thousands of Syrian refugee families, we are not only doing the right thing but are also providing a future for millions of Syrian children.

Carolyn Miles is President and CEO of Save the Children, based in Fairfield, CT.

Editor's Note: Save the Children is a partner of Johnson & Johnson, which is a sponsor of The Huffington Post's Global Motherhood section.