(RNS) Muslims will overtake Christians by the end of this century.

The numbers of people with no religious identity will soar in the United States and Europe, but the unaffiliated will lose worldwide market share as Christians maintain a steady growth.

All these changes are drawn from the Pew Research Center’s new projections, released Thursday (April 2), that map global faith traditions and how they’re likely to shift by 2050.

The report says nothing about the transcendent message of any religion. It makes no claims about believers’ level of devotion or practice.

Instead, it’s a story of nitty-gritty statistics: Which group is having babies (lots of babies or just a few)? Which ones have many young people, and which are slowly graying out? Whose followers are on the move — from one nation to another, or switching religions?

“Demographics are an under appreciated force that is shifting the contours of faith,” said Conrad Hackett, the Pew demographer who led the six-year study. Hackett analyzed projected changes for Christians, Muslims, Jews, Hindus, Buddhists, folk religions, other minority religions and the unaffiliated.

Those contours matter. The Pew Research Center doesn’t delve into political forecasting, but readers of the report’s projections from 2010 to 2050 might feel a thumb press down on many sore spots and raise questions beyond the scope of Pew’s data:

* Will prejudice against Muslims rise as the percentage of people in Europe who are Muslim climbs to 10.2 percent, up from today’s 5.9 percent? “The projected growth rate is only about 1 percentage point a decade,” said Hackett. “But it’s a very visible change: More people wearing veils, more behaving in culturally distinct ways.”

* Who will assume the minority voice in the U.S. public square as Muslims outpace Jews as the country’s third-largest group, after Christians and the unaffiliated?

* How will more secular regions such as Europe and the U.S. relate to deeply religious regions, such as sub-Saharan Africa, divided among Christians and Muslims?

“The question is: ‘How will we understand each other?’” said Cooperman. “Sub-Saharan Africa is 12 percent of the world population now, and it will be 20 percent by 2050. That’s huge growth for people to get their heads around.”

The report, sponsored by the Pew-Templeton Global Religious Futures project, offers many more head-spinning numbers and a religion-by-religion, region-by-region analysis of data from 198 countries and territories, representing nearly all the world’s population.

“No one has done anything like this before, so we had no idea about the big picture,” said Hackett.

Among the major findings:

* “As of 2010, Christianity was by far the world’s largest religion, with an estimated 2.2 billion adherents, nearly a third of the Earth’s 6.9 billion people. Islam came in second, with 1.6 billion adherents, or 23 percent of the global population.” Four in 10 of all the world’s Christians will live in sub-Saharan Africa by 2050.

* While Christian numbers will continue to grow, Muslims, who are younger and have a higher birth rate, will outpace them. By 2050, “there will be near parity between Muslims (2.8 billion, or 30 percent of the population) and Christians (2.9 billion, or 31 percent), possibly for the first time in history.” Barring unforeseen events — war, famine, disease, political upheaval and more — Muslim numbers will surpass Christians after 2070.

* Worldwide, the unaffiliated will fall from 16 percent to 13 percent. Christians, Muslims and Hindus live in areas with “bulging youth populations,” high birthrates and falling levels of infant morality, the report said. Even the global tally for Jews is expected to rise, based on the high birthrate of Orthodox Jews in Israel. Meanwhile, the unaffiliated are “heavily concentrated in places with low fertility and aging populations, such as Europe, North America, China and Japan,” the report said.

* Nearly two-thirds of all the unaffiliated worldwide live in China, the research found. “If Chinese authorities allow greater freedom of religion, the share of unaffiliated in the world population could shrink even more dramatically than the report predicts,” said Ariela Keysar, associate director of the Institute for the Study of Secularism in Society and Culture, who consulted on the project.

* While religious switching has a significant impact in North America and Europe, in many countries, changing one’s religion is difficult — if not illegal. There’s no data on religious switching among China’s 1.3 billion people, with nearly 50 percent of them in the unaffiliated ranks, for example. But in the 70 countries where survey data was available, the report found that Buddhists and Jews are the primary losers on the switch-in/switch-out balance sheet, Hackett said. “In the USA, there are famous converts like Richard Gere, but there’s a lot of disaffiliation among those who grew up Buddhist.”

* In the U.S., Christians will decline, from more than three-quarters of the population (78.3 percent) in 2010 to two-thirds (66.4 percent) in 2050. Religious “churn” — people leaving their childhood faith for a different faith or none at all — is the primary driver of change.

* The Muslim share of the U.S. population is projected to climb to 2.1 percent, up from less than 1 percent today. Jews will fall from 1.8 percent to 1.4 percent.

* In 2010, there were 159 countries with a Christian majority, but that will fall by eight countries, including France, the United Kingdom, Australia and New Zealand. By 2050, Muslims will hold the majority in 51 countries, up by two from 2010, including Nigeria, which just elected a Muslim president, and the Republic of Macedonia.

“In many ways the value of projects like this is not to say what the world will look like in 2050. The world could change,” said Cooperman. “But they tell us about the world today and the recent path. Peering into the future greatly illuminates what is happening today and its consequences.”

There May Be More Muslims Than Christians In The World By 2070, Pew Study Suggests
Projecting The World's Faith 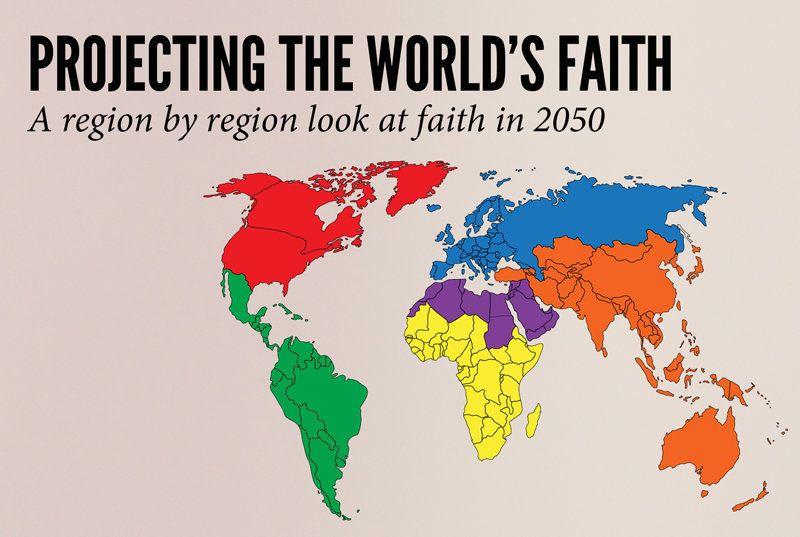