Lately with the political debates going on everyone seems heated about topics, trends, data. Who's story is right, who's story is wrong. The reality is most of social media and content is being tailored to your personal preferences so debating while fun, it is actually less likely with Facebook (for example) that you are constantly getting fed information that Facebook would like you to read or think about. How in a world of tailored content are we able to draw the line between "personalized" and "manipulation"? Where does technology deliver us relevant information versus being fed a particular agenda? This world of Trend Setting or trend "monitoring" is a huge and budding since 2013 it shows everyone's inherent desire to be in-the-know. Publishers and the companies pumping content across all the interwebs are obsessing over this technology genre and here's a couple ways advertising is changing attention grabbing.

Traditional Advertising Reborn
Ad placement has its roots in the space of retail storefronts-- billboards and signs outside of store. Eventually ads moved into newspapers and printed on paper. Then online. Now we have pop up ads on mobile phones, video ads before watching video clips on youtube, surveys to get behind paywalls, ads are everywhere. With the space of ads starting to become saturated, the real estate or spots that can have ads is becoming claimed. While some advertisers work to get creative like having drones with ads flying over car traffic, other advertisers choose to win the game with technology making for targeted advertisement. Strategies behind targeted advertisement are simple: figure out who you want an ad to be seen by (age, sex, location, preferences) and show that user (person) the ad you want. On the surface this is simple but with the amount of user data is that captured, what is known about these users is even more than just demographics it can be extremely targeted, down to a person's taste preferences or even menstrual cycle. Advertising is getting creepy, or isn't this the point of advertisement? Where does the line set for normal or creepy advertisement? 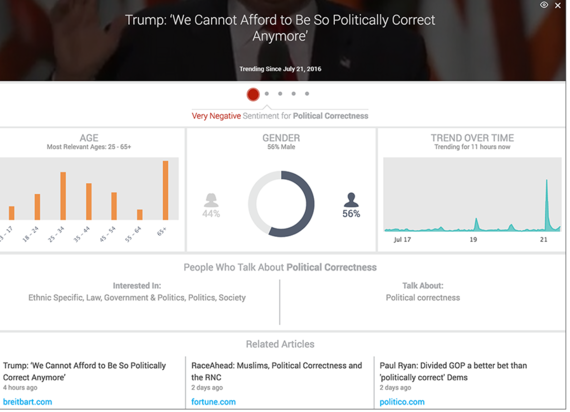 Following Trends vs. Making Trends
There's lot of data behind all these ads and advertisers are starting to get even more accurate around how to The world's largest social media networks and publishers like Twitter, Facebook, LinkedIn, and ESPN to name a few, are making 'trends' a staple of their editorial. New programs are re-configuring the way they deliver news based on a reader's usage patterns, allowing them to answer the call on the demand for quick and relevant content consumption. One tool used in this space is Taykey which gives marketers data around their audience by providing marketers with real-time tools to automatically target advertising and gather insights based on what's trending for their audience. In regards to this battle of finding and honing in on trends, Taykey CEO Amit Avner has said, "Trend data allows brands to move fast and quickly engage with their target audiences. Some of the world's largest brands are now realizing the benefit to discovering what's trending for audiences and how those interests change over time."

And its not just publishers like BuzzFeed using content performance data to then produce and make relevant videos. The art of making content but at what point is content being made to please the crowd or being made to influence a crowd? What's the difference between entertaining and influencing and is there one?

Another startup, Knotch, provides its own dashboard and intelligence to brands about online marketing. They describe this battle of helping people feel emotions more and think less by using data strategies to minimize the "cognitive cost" meaning, what is the cost to the user to have to think about what their emotion may be versus just thinking about it. Knotch in the early days of its product used color swatches to gauge readers or users emotions and built software around user feelings.

Sampling vs. Buying (The Picky Consumer)
One area in advertisement that gets overlooked in this personalisation conversation is that the consumer is getting even tougher to win over. While ad targeting and technology make it easier to find the exactly customer you want, competition is steep. Other companies are trying the same thing and thus this competition to the customer across all platforms puts the consumer in more control so now money is being spent not only to find the perfect end user (or consumer), the expectation of a sample or trial or freemium is very high. Consumers today are not loyal and have become even pickier with social media at their fingertips. The management of consumer attention and calculating this ROI is also another emerging technology space with companies like SocialBaker attempting to report on social ROI for companies, and then AdIndexer double-checking your clicks and what other ad platforms may be reporting versus what's actually happening. In the wild west of attention grabbing even a few seconds off on a report could cost billions in advertisement losses as Facebook learned earlier this year in its video miscalculations.

What will be interesting to see is that the future of advertisement might be an Idiocracy-like future filled with cheap consumer goods and an un-intelligent consumer base willing to follow the crowd, or it could be all these technologies end up making more informed real-time minded individuals tough to win the business of?

In the meantime for any indication of the future the real question will be, who profits off of sharing intelligence? Because the future could be filled with beautiful data sharing and enlightening capabilities or we might just all be thinking about Slurpees.