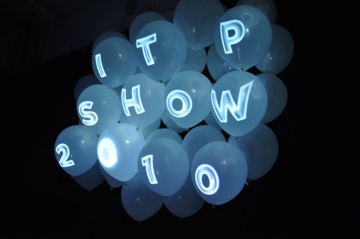 The thing about going to car shows and seeing concept cars, cool as they may be, is you know that Detroit is never going to build them. 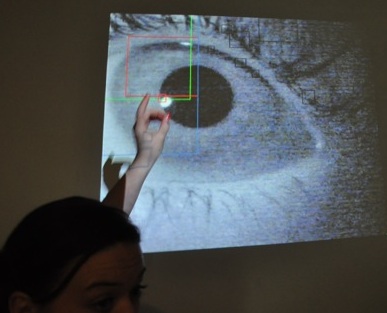 At NYU, spend an hour at the Spring ITP show, and you have the exact opposite impression. Certainly not everything is an appropriate commercial product; the robotic chair that rolls around the room or the iPhone controlled elevator shoes may be a bit too conceptual to find their way into the mainstream.

But those are the exceptions.

This year's ITP show is all about physical computing. The connection of computer intelligence to physical things. 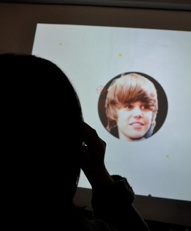 So there's the hack of a Nintendo camera and software to create eye tracking that allows the wearer of the glasses to 'explode' things projected on the screen in front of them. The project, called I.C.U., was a clear hit with the exploding Justin Bieber image creating a great amount of amusement. 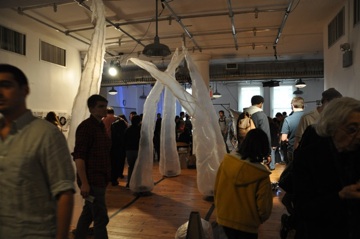 Creatures were in good supply, all manner of digital worms, fish and other sorts of things that reacted to proximity, touch and attention. From squirmy worms to a digital aquarium of almost lifelike but imagined sea creatures. 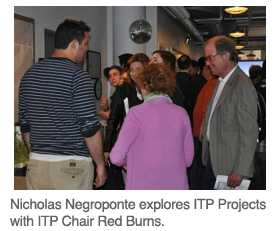 Interestingly, the least interesting things were the presentations that were flat on a screen. Screens and keyboards seemed so 2009 now that projection, and touch sensitive devices, and sensors that talked to video seemed so prevalent.

Why would you look at video on a screen,when you can see a multitude of images projected on bunch of balloons? It's simply no contest.

At ITP the physical beats the virtual. Tactile trumps the merely visual.