In the future, only rich people will own cars and only robots will drive them.

That’s the takeaway from a new research note from Morgan Stanley auto analyst Adam Jonas. Like Tesla Motors CEO Elon Musk, he predicts that improvements in self-driving technology will eventually lead to bans on human driving on most roads.

Ride-hailing services such as Uber and Lyft, which have already been widely adopted in major urban centers, have paved the way for cities, and eventually suburbs, to adopt mega-fleets of public vehicles that will taxi passengers around. This will dramatically lower the cost per ride to about 25 cents per mile, which is roughly one-tenth of what a traditional taxi costs, Jonas said. He provides no clear timeline for when this might occur.

By contrast, wealthy people -- at least in the near-term -- will own self-driving vehicles, a fact on which Mercedes-Benz and Tesla seem to be banking.

Again, Jonas provides no clear timeline. But an increasing number of luxury carmakers are already adding autonomous features to their vehicles. In October, Tesla's Musk estimated that fully driverless cars will be on the road by 2023. 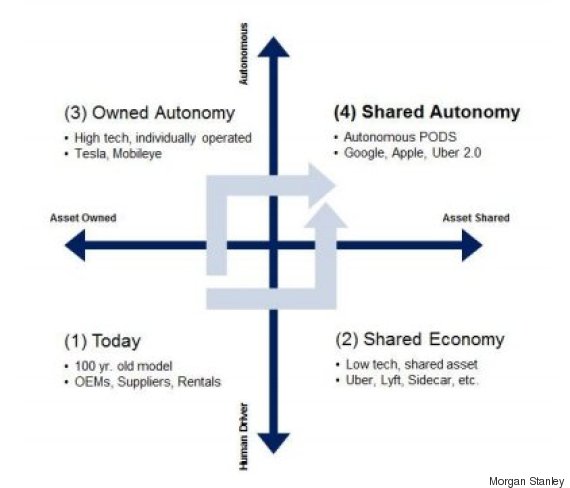 Here’s how the chart breaks down: