"Let me show you something," says Steve Haworth. Grinning like a kid, he places a small magnetic ball on the tip of his right ring finger. He lets go and rotates his wrist. The ball sticks.

The force is with Steve, thanks to a neodymium magnet in his fingertip that attracts objects and detects fields -- a feeling he describes as a sixth sense. When he turns on an electric can opener, the metal dances.

Steve Haworth is one of the world's best-known body modification artists. Flesh is his medium, and his works expand the creative possibilities of human appearance and ability.

Look closely, and you'll see three vertical scars over his right eye, as if a tiger mauled him. He cut these lines into the skin with a scalpel and let them heal, a process called scarification.

"I'm inspired by elves," says his friend and client Michelle. She lifts her hair to reveal pointed ears, and a star-shaped implant beneath the skin of her arm. 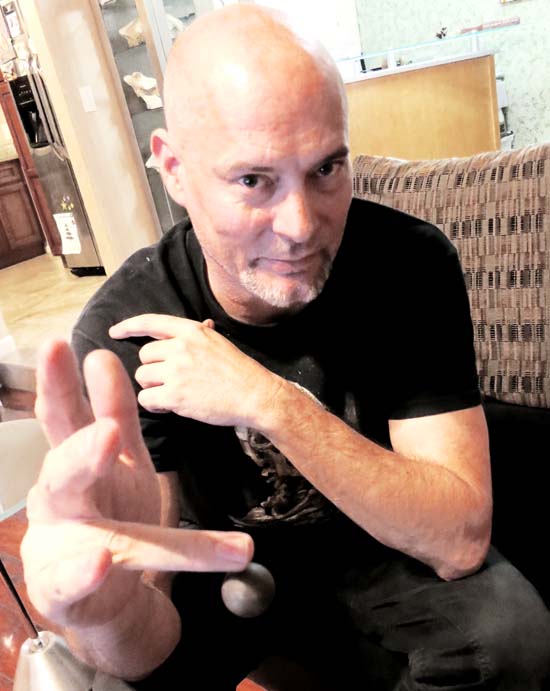 Steve's world is a sometimes controversial mix of art and science. He grew up in the medical industry; his father was an engineer and owned a manufacturing company. In the 1990s, Steve began experimenting with enhancements that previously existed only in sci-fi and fantasy. He invented subdermals (implants placed under skin, through an incision) and transdermals (that protrude from the flesh). Dissatisfied with the jewelry available, he began making his own silicone shapes, and is the leading manufacturer today.

His innovations include the "Metal Mohawk" where spikes protrude from the scalp, and mods for "Cat Man" Dennis Avner, like a flattened nose and whiskers. Steve currently works out of his home in Phoenix, focusing on magnetic implants, electrocautery branding, and inventing.

Extreme body mods can be shocking, and have their detractors. Steve has maintained respect with his strong code of ethics. His team prioritizes safety and avoiding cross-contamination. Except for magnetic implants, he turns down clients who aren't already modified (such as tattoos or piercings), as they may not fully realize the stigma that can result. He also refuses to work with those who come for thoughtless reasons, or seek what he considers mutilation: "To me, that means a non-functioning human. I'm not willing to ruin people's lives."

Steve doesn't think split tongues and forehead horns will ever become mainstream, but "there are about 10,000 people with implants now, and 30 body mod artists worldwide." The community's close-knit; he frequently travels for events and has been to Japan twice, teaming up with Keroppy and Asami of bagelheads fame.

It's near midnight when we wrap up the interview, and Steve still has work to finish. "Right now, I'm playing with a technology that lights up 3-D implants, and lets them flash to the beat of club music," he smiles. He demonstrates the prototype, then waves goodbye, and returns to his lab to keep on tinkering.

Read more about extreme body mods, especially in Japan, on La Carmina blog. For more on Steve Haworth and to make a booking, visit his website.