Recently, the first of many Farm from a Box to launch globally, landed in Sonoma county. Nestled among the vineyards of Shone Farm, "Adam" - a fully functioning farm emerged from a modified shipping container - was soft launched surrounded by a small group of supporters, advisors and several pioneering partners, to include those companies that manufacture all the necessary component parts from pumps and irrigation systems, to solar panels, weather tracking devices and batteries. The effort to disrupt the current thinking and approach to farming in rural communities was conceived by founders Brandi DeCarli and Scott Thompson who are taking the concept of 'Teach a man to fish and feed him for a lifetime' to a whole new level. 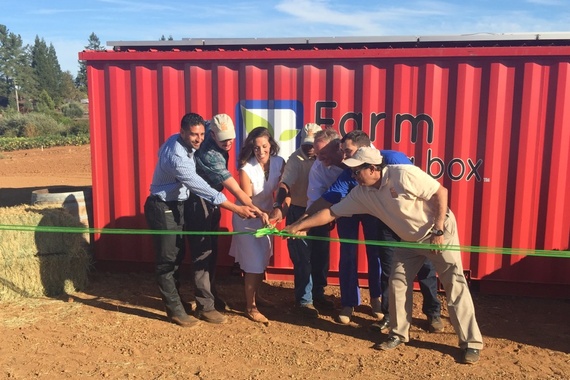 Having spent much of their careers overseas and working in various development and non-profit efforts, when Brandi and Scott see a need they dive in. Farm from a Box, which has been 3 years in the making, came from their personal passion to find a different and sustainable way to reinvent food aid particularly in areas where natural resources, infrastructure and technology are scarce. "Farm from a Box is the Swiss Army knife of sustainable farming," said Brandi DeCarli. "We found that rural communities often lack the resources needed to access nutritious food. We developed a toolkit that contains all of the core components needed to grow your own food, on a two acre plot of land, without the need for an existing grid. Imagine the good it can do by growing local, organic food for a school, or helping jumpstart food production after a disaster. Farm from a Box enables and empowers communities to provide for themselves."

Working with renowned agroecology Professor, Dr. Miguel Altieri, at UC Berkeley, who says that it is possible if land, labor, compost and seeds are available, a 2 acre diversified and self-sufficient agroecological farm can be up and running in a week's time, managed by people locally. "I support the idea of Farm from a Box as it can provide basic resources for rural communities to create farms that don't require external inputs," advised Dr. Miguel, "allowing them to reach yields that will deliver sufficient food for themselves, with a surplus that can be sold in local markets."

Farm from a Box plans to address the three keys areas that surround the global food crisis as noted by the World Resources Institute and underscored by the UN Sustainable Development Goals, ratified last month: 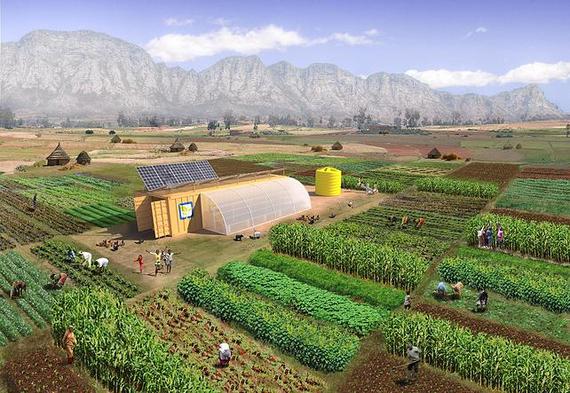 From Sonoma to Ethiopia - Sustainable Agriculture One Farm at a Time

In early 2016 the second Farm from a Box, "Lucy," will land in the community of Ziway, in the Rift Valley, Ethiopia and be run by a local women's cooperative, the Rift Valley Women's and Children's Development Organization. The Ethiopian Government, showing remarkable leadership and entrepreneurial spirit, in 2011 established the Ethiopian Agricultural Transformation Agency (EATA) and initiated a massive growth and transformation plan to look at these issues holistically. Their goal, "focus on enhancing productivity and production of smallholder farmers and pastoralists, strengthening market systems, improving participation and engagement of the private sector, expanding the amount of land under irrigation, and reducing the number of chronically food insecure households." Working closely with partners from the government, NGO and private sector will be key in ensuring that Farm from a Box sees long term success. As Scott shared at the recent groundbreaking,"Women play a vital role in global food security. While Ethiopia has historically struggled with food insecurity, the country is investing heavily in strengthening rural agriculture and building the capacity of smallholders. We chose to pilot "Lucy" in Ethiopia because we know that significant growth is occurring there and giving women access to tools is an investment that will yield tremendous results over the long term."