If you really want to save the world by eating responsibly, be prepared to look beyond eco-labels for food sources that have minimal or even positive impacts on our planet.

Food companies have the challenge of turning the unpalatable into the delectable and changing long-standing cultural norms about what we put into our mouths. It is possible to fill seven billion bellies with nutrient-rich foods; but we're going to have to embrace some unorthodox ingredients to do so:

Beef: it's what's for dinner. And it's incredibly resource-intensive to produce. Eighty percent of the world's population include insects in their diet, so it's about time we get over our unreasonable fears and get with the insect protein movement. 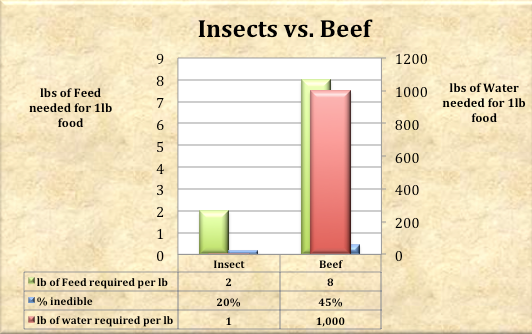 Companies like Chapul and Exo are releasing protein bars fortified with insect flour and they're using a long-known marketing tool for introducing something new and different. By grinding crickets into flour and inserting it into a bar with tasty ingredients they're taking something unfamiliar and coupling it with something more familiar, easing the mental leap for those unprepared to pick exoskeleton from their teeth. Insects are already being increasingly used as feed for farm animals, and soon they will become the farm animal.

The U.S Government has spent $200 million preventing the voracious Asian Carp from reaching the Great Lakes where they threaten a $7 billion dollar fishing industry. They've already wreaked havoc up and down the Mississippi River, crowding out native species and making it near impossible for them to flourish.

However, there are plenty of other uses for these fish. They can be processed to extract omega-3 rich fish oil. They can be used as a protein source for pet food. They are consumed by the Chinese and in time may well be on your dinner menu in the near future.

Another untapped and overabundant food source are jellyfish. Jellyfish are made of three things: Water, collagen and protein. They are found everywhere and as far as diet foods go, they can be an excellent source of protein. With the warming of our seas, jellyfish populations are skyrocketing, so there's no shortage of supply.

In 2011 there were a deluge of articles on the surplus of dark chicken meat. The U.S. had been exporting chicken thighs and legs to Russia and other countries because there wasn't enough demand for it on US soil. Since then dark meat has experienced a resurgence, with demand and prices steadily rising. Resourceful entrepreneurs are inventing and releasing more and more chicken products including chicken sausage and chicken patties.

According to the FDA, dark meat has more iron, zinc, riboflavin, thiamine, and vitamins B6 and B12 than white meat. Asian and Hispanic communities prefer dark meat for the fuller flavor and chefs on television tout the superior taste and texture of dark meat, influencing home cooks to use it as well. We're well past the days of eating dry, flavorless chicken breast and the global chicken trade is more balanced as a result.

Only 50 percent of food intended for consumption is actually eaten. What happens to the rest? Much of it is left to rot in landfills, releasing methane, a potent greenhouse gas. The solution? Diverting some of this waste back into the food cycle.

The challenge is in collection -- and companies like Back To The Roots have solved this by striking up a partnership with a local coffee chain to collect used coffee grinds and using the grinds to create grow-your-own mushroom kits.

In the future there will be companies selling bread from spent beer grain; wine from grapes thrown away by vineyards; and jams and jellies from fruit destined for the compost pile.

The best part for companies? Aside from collection costs, a raw material cost of zero dollars.