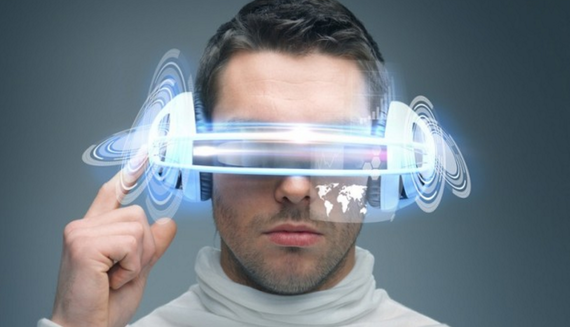 If there is any one word on the tips of game designer's lips these days, it's virtual reality.

It seems as if VR was just invented a few short years ago, but the concept of virtual reality as an interactive method of experiencing a world that didn't really exist goes back as far as 1960 when the very first head-mounted display was presented to the public.

Granted, it was awkward and barely more than a 3D stereoscope. Yet, the idea of wearing a piece of gear that would make a person feel as if they were in another space took root in that moment and spawned the many inventions that we have come to realize in the recent years.

It wasn't until 1987 that the term "virtual reality" became popularized to describe this new method of sensory experience.

One unit model ... the EyePhone was developed to work with various gaming stations-- including Xbox, PlayStation and some of the older computer games.

In 2014. FaceBook purchased Oculus Rift, which was released, for gamers on March 28 of this year in the U.S. and September 20th in Europe and Canada. Facebook has competition from Samsung, Sony, Nintendo and Valve.

With this much interest on the part of manufacturers to make the necessary gear, one would think that VR is a foregone conclusion.

Still, the question that is yet to be answered satisfactorily is whether gamers are interested enough in VR to make it a success.

The final - or perhaps, the first - issue that needs to be addressed and resolved is how innovative the designers can be especially those in the top art programs.

Currently, artwork revolves around a 2-dimensional view whereas VR is a 3-dimensional experience. Mark Zuckerberg, himself, states that the expansion of artistic creativity is required to make VR a viable business investment.

Since Facebook wants the next experience to be one that is adaptable for MMORPG games, how each player would interact with the other gamers in a single environment remains key to the success of a module like that. Without a thorough understanding of all the issues at stake, it is likely that virtual reality is simply on a collision course with the reality of life.

As Facebook execs discuss the plausibility of VR parks and untethering VR for MMORPG games as the next outlet for an immersion into a virtual play space, what lessons can be learned from the reports of Pokémon Go injuries and deaths?

Is VR a Gimmick or Advancement?

One of the main holdbacks around the idea that VR may advance gaming in some new way that will make it more interactive than what is already available is the argument that virtual reality is nothing more than the latest gimmick to increase sales rather than a legitimate approach towards a forward step in gaming.

Perhaps that argument is correct. Perhaps that is the only reason why so many big name manufacturers are presenting virtual and augmented reality systems to the marketplace this year along with plans for increasing the number of games and methods of play over the next two or three years.

On the other side of the value of VR to gaming is the push from gamers and manufacturers to move game play to a more thought-provoking and stimulating experience that will alter the face of the way games are played.

Regardless of which side you prefer to land on - and you could actually land on both sides of the issue simultaneously - one major problem right now is in how designers can bring games into the 22nd century of gaming in 2017.

A New World for Game Designers?

Such consequences as were brought to light by Pokémon Go raises the level of responsibility that game designers and game companies have regarding the results of their products.

• Could both in some way be liable for deaths, injuries or permanent emotional disabilities of those who play their games?

• Would it be the primary responsibility of the designer or the distributing company to ensure that the majority of players would remain safe from these types of outcomes?

• Who would be responsible for collecting and analyzing the data to determine the profiles of each genre of gamers?

• What legal barriers are or could be erected internationally to prevent frivolous lawsuits from going forward?

Questioning the Effects of Games Enhanced by a Virtual Experience

Part of the problem of designing games that are internalized as experiences is how those experiences are likely to affect the majority of players.

• Will certain games have a more negative impact on the emotional and mental image that players have of their own abilities?

• Would it increase aggressiveness or passivity?

• Could actions in some games that we are currently familiar with if played as VR intimidate or empower gamers?

• And if so, is it beneficial to society at large or would it exaggerate the potential of a new type of classism - strong vs weak, bully vs enabler?

Gamers that love war games such as Call of Duty believe that VR would enhance their gaming experience. But, psychologists and game designers are highly concerned that such a vivid experience may impact the emotional stability and well being of the players.

Additionally, the designers admittedly lack knowledge about the personalities of the demographics involved in this type of game play.

If so, could such a game in VR unleash more aggressive activity in the real world? Are the majority of players really passive and only using this type of game to be aggressive in a controlled environment?

RPG Games such as the Final Fantasy series, Grand Theft Auto and Skyrim are currently exciting. But, if the games were played in VR, would the emotional impact enhance or over exaggerate the importance of decisions that the player makes and in turn, cause the adversaries to be more intimidating and make the player feel helpless? Is this the effect that the VR manufacturers want to have on any large group of people?

It has been argued that Pokémon Go was a test case in gaming merging VR with augmented reality. While the game is a huge amount of fun and took Pokémon from the children's shelf to that of a game for all ages, it also exposed a lot of unintended and disastrous consequences of being immersed in a game where there is a crossover of virtual experience with real life.