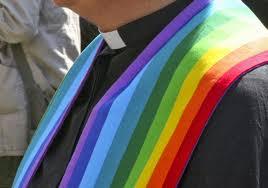 A quiet revolution is taking place in once anti-LGBTQ denominational circles. Women and men who are widely known to be openly partnered and "practicing" queer people are being ordained as ministers in churches once ardently opposed to the ordination of gays and lesbians -- and are being celebrated for it. The recently unthinkable is becoming commonplace, and none too soon.

Late May and June is prime ordination season, with Pentecost Sunday as the day of choice for many. Graduation day has come and gone by then in seminaries, and ordination day approaches. In Texas, the storied "buckle on the Bible Belt," this season I have watched as several recently authorized women and men knelt for the laying on of hands in their sponsoring congregations, and their same-sex partners have participated in the ordination of their beloved spouses as openly and joyously as any traditionally married partners would: attending the service, organizing the reception and in some cases participating in the liturgy itself. Denominational officials presiding at these ordinations are seemingly as happy to carry out their duties at these LGBTQ ordinations as they are for those of their "straight" ordinands. What a difference a year or two makes!

Make no mistake about it: The genuine acceptance of LGBTQ candidates for ordination in traditional and mainline contexts is revolutionary. Though closeted gay men have been ordained for generations, and more recently closeted lesbians as women's ordination came online, stigma often haunted any clergy person suspected of being a member of the sexual minority. Not long ago, authorizing boards were battlegrounds. Gay and lesbian candidates for ordination were rejected outright, and anyone already ordained by "don't ask, don't tell" systems who was perceived to be "different" was subject to church trial and defrocking. The bittersweet evidence of this sad history is on display at the Shower of Stoles Project, where over a thousand liturgical stoles and other sacred items of those defrocked and hounded into exile are archived in testimony to the injustice aimed at LGBTQ clergy. Today's spirit of openness is unprecedented. Though some ordaining boards are still rejectionist, each year the evidence mounts that once-ostracized queer people are moving from the periphery of their religious groups into leadership positions. The outrageous, wasteful loss of gifted religious leadership based on heterosexist, homophobic, and transphobic prejudice may be finally nearing its end for many traditional Protestant communions.

Of course, there are exceptions, like the struggle now taking place in the United Methodist Church. But the prophetic leadership of the United Church of Christ, the Unitarian Universalists, the Evangelical Lutheran Church, the Presbyterian Church (USA), the Alliance of Baptists, and, of course, the Protestant Episcopal Church is demonstrating that just as women's ordination caused none of them to collapse, just so, the ordination of LGBTQ women and men of faith strengthens the communions to which they belong. Even the Christian Church (Disciples of Christ) is coming on board quietly now, region by region. Though Catholicism and Eastern Orthodoxy seem unmoved by ordination developments among Protestants, their hierarchies are monitoring what is happening for queer folk as closely as they have watched the ordination of women, one of the great movements of the Holy Spirit in late 20th and early 21st century ecclesial life. Surely, the "Grandmother" of all LGBTQ ordaining bodies, the Universal Fellowship of Metropolitan Churches (MCC), must be smiling at these developments.

I wrote a book about ordination to Christian ministry in 2004 when the open ordination of lesbians and gay men was virtually unheard of, save in one or two denominations. The Bad Ol' Days of secrets and ambushes over sexual orientation and gender variance were awful to live through. So much hurt and needless pain! Now, however, with the advent of a new day in ordination, anyone called by God and willing to prepare for a life of service in the church has a shot. Today, I celebrate what is coming to be, not what once was, and I live in hope of a clergy more realistic, faithful, and humane than I once knew. LGBTQ sensibilities have never been the most distinctive or predominant qualities of who queer clergy were, as important as sexual honesty and orientation are in anyone's life. The "Otherness" of gay people is a gift to the church's ministry, among the many gifts bestowed by the One Spirit, as L. William Countryman and M.R. Ritley said. The obvious gifts of effective ethical leadership, compassion, courage, intelligence, skill, and devotion to God have always been what really counted in the formation of clergy. Now that the noisy clamor of bigotry in North American Protestantism and culture is dying down, the churches' ordaining bodies are more able to discern how often LGBTQ people display the true ministerial character that the 21st century church so desperately needs. While we must never forget the struggles that have brought us to this new era, we do not need the distraction of placing blame for what has been. Instead, straight and LGBTQ people must chart the future of ordination from this time forward, together.

Today's ordination of LGBTQ women and men, though officially unobtrusive, is a welcome antidote to the old toxic hatreds of the past. As these gifted ordinands take their places among their peers in ministry, the presence and witness of LGBTQ clergy will become less remarkable and more commonplace. Oh, how I welcome that development! But until the old has fully passed away, and the new is fully come, I cannot help pausing to reflect, to remember the pioneers who brought us this far along the way, and give thanks for the colors of the rainbow. For "there are varieties of gifts, but the same Spirit; and there are varieties of services, but the same Lord; and there are varieties of activities, but it is the same God who activates all of them in everyone" (1 Cor. 12:4-6, NRSV).