Perhaps because we still think of animals in terms of the iconic images of Aesop, the half-legendary Greek storyteller from the seventh-century BCE, there is a temptation to regard human relationships with animals as almost outside of time. We imagine the clever fox, the majestic lion, and the foolish donkey as though they were part of an eternal drama, but animals, and human relations with them, have changed enormously in the past century alone.

To appreciate the extent of these changes, consider the family dog. In around 1950, the family dog slept in its own "doghouse," but was expected to warn the family about intruders. Even in cities, pet dogs could run freely much of the time. Special foods for dogs were available, but they seemed frivolous to many people, and the family dog lived from scraps from the table. A dog would only get to see a veterinarian only when seriously ill. Professional dog training (known as "obedience school") was for the upper class, and most people found it a bit effete. Dogs could leave their feces in parks and almost nobody found that offensive. Strays were common, and there were lots of jokes about the dog-catchers' pursuit of them. Every now and then, dogs would even be eaten, usually not by Asian immigrants but by the poor. By contemporary standards, dogs were still half "wild."

Today, Western dogs share far more intimately in the life of human society, and are trained accordingly. They live in the family home and, outside of it, are hardly ever allowed off the leash, and must be accompanied by a person with a pooper-scooper. They have regular check-ups with a veterinarian, as well as a long list of shots, but many are born with respiratory difficulties, skeletal deformities, deafness, or other problems as a result of intensive breeding. Training is necessary and expected, since they are perpetually around men and women. Dogs in the West eat mostly foods that have been specially prepared for them; there are gourmet dog-foods, as well as lines of designer clothes for dogs. They also have prescription drugs, psychiatrists, jewelry, five-star hotels, hospices, and television shows. Just about every human practice and institution is being adapted for dogs, and they are usually not expected to provide any service beyond offering companionship.

Are the lives of dogs better or worse than in 1950? The old, pre-1950s world could be unsanitary and messy, but it had a greater sensual immediacy. It is hard to shake the feeling that the lives of dogs used to be more natural, though the concept of "nature" has itself become too elusive for many academics. An objective comparison is impossible.

But what does the future hold for dogs in the West? Perhaps, if the integration into human society continues, we could come to regard them as almost fully "human," with the rights and responsibilities that entails. Perhaps those canines that infringe on the regulations will be tried in special "dog courts," where they could be sentenced to prison time or even death. Will dogs be increasingly injected with human genetic material to a point where, over generations, they even begin to look like us? Alternatively, dogs and human beings may start to tire of one another's constant company. Perhaps, once again, there will be bands of feral dogs roaming the countryside, as there still are in much of Africa and Asia. I must leave such speculations to writers of science fiction.

But don't we human beings control our relations with animals? After all, we are the dominant species, right? In fact, we obviously don't even control our technologies. Nobody decides what devices shall be envisioned, invented, adopted, expanded, or discarded over the next few decades. We imagine all of humankind embodied in a single man or woman, who acts with a single will, and makes decisions accordingly. We may admire, love, curse, fight, hate, and reconcile with Humanity, but that great mother/father is actually not at home. There is really no such "Humanity," only five billion odd human beings, who, when they are lucky, get to make a few decisions about their own lives. Our changing relationships with animals, like technologies, are now very far beyond the ability of even the most conscientious scholars to follow, much less to predict or control. 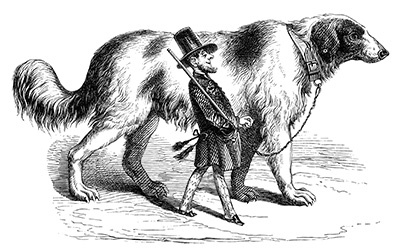