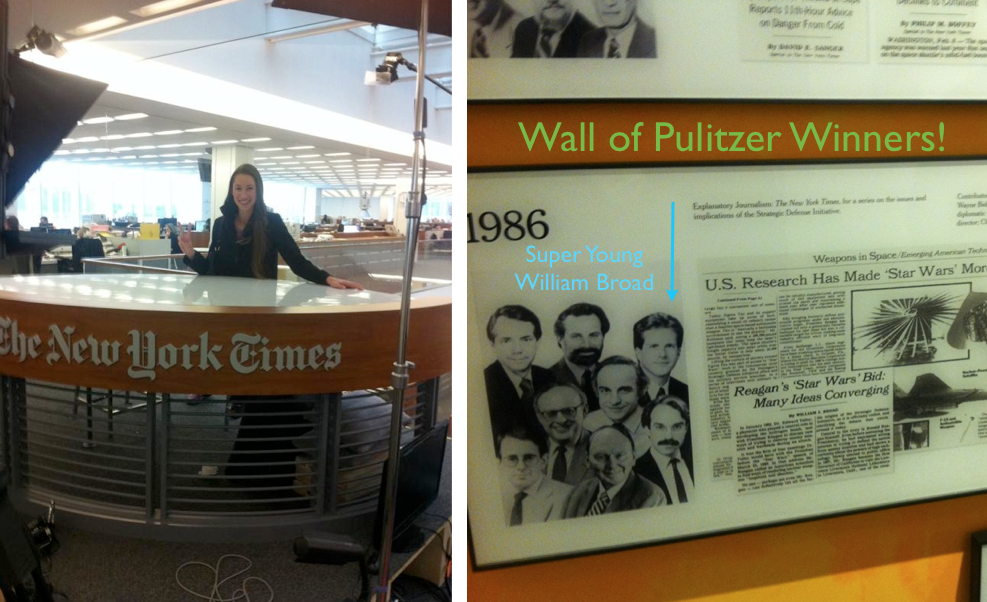 I had the pleasure of visiting William Broad at the Times today. He kindly gave me the tour, and showed me the Pulitzer wall, which he was on for a group prize in 1986. We even had some hang time in the cafeteria to chat about neuroscience, yoga injuries, the wacky yoga scene, human nature, and other top secret undercover stories.

I was most impressed by his actual desk, which was buried under piles of wacky science books and stacks of papers. Couldn't have been staged better. The office has walls of books, giving off the vibe that only paper books can: peaceful space for clarity, endless information luring original thought and creativity. The whole place is super-expansive by design and feeling, idyllic for focused streams of consciousness. My one complaint: no non-dairy milk options in the cafeteria! Let's get almond milk over to the Times people!

There are fish bowl gardens set up for external viewing but not to be entered. I've always wondered about these outdoor/indoor spaces with restrictions. My old apartment building also had a nice glassed-in nature area permitting no visitors for viewing or reflection; only the gardener was allowed in, on occasion, to pull weeds.

I have a big soft spot for the Times and massive respect for its tornado power. Lizette Alvarez gave me a huge and powerful gift. She sent me a general email through my website last year asking if she could interview me for an article on yoga. Now I read the paper, I had seen the small articles they publish weekly on yoga in the Stretch column hidden on a lower part of a page, and was grateful they had decided it was my turn. After she had hung around for a few days, I asked her if she had everything she needed. She said she spoke with her editor and decided to turn my story into a cover story. I was beyond nervous and excited, but more nervous.

Rebel Yoga was the most emailed and viewed article in the whole paper for a while, and burst open a small flood of other pieces on yoga. Yoga was officially here to stay, and now it didn't need its guru anymore.

Most of you, if you keep up with my ongoings, know that I invited William to have a public chat at the SOHO Apple store for the launch of Yoga Cures. (Have a listen to the podcast!) I thought a conversation would be more interesting than just me up there blabbing about my book and how awesome yoga is to a crowd of people who probably, hopefully, already practice yoga.

William has some serious yoga-people-haters, steaming about the topics covered in his book, The Science of Yoga, The Risks and the Rewards, where he actually concludes -- if you take the time to read the book and not headlines -- that the rewards outweigh the risks. I have had my fair share of yoga-people-haters over time too, so I have a soft spot for William there. I've learned that if you don't have anyone opposing your work, if you don't have anyone thinking "man that should be me, I could do that, I should have thought of that, or they must have teams of people doing it for them," your work simply isn't reaching enough people to be relevant.

To twist Mr. Broad's yoga-people-haters in a bind, S.O.Y carries no actual opinions about yoga. Getting to know Mr. Broad, his actual opinion is that yoga is wonderful, powerful stuff that everyone should practice with ease. He is so passionate when he speaks about his home practice and his physical limitations and the incredible benefits of stress relief, clarity, creativity and focus.

S.O.Y. reads comparatively to Michael Pollan's In Defense of Food, telling the windy tale of the history of yoga, the scandals through the times, and a lot of the not-so-talked-about topics that have gone down through past and modern history of yoga. You know, the stuff that no one likes to talk about. Insert yoga-community backlash, a movement of people actually coming out and speaking out about their negative experiences with yoga, pushy teachers, power-hungry gurus, and the scandals go on and on. He even has a bunch of stuff on me in there! And not so much to my surprise, he criticizes some of the marketing claims of my first book, Slim Calm Sexy Yoga, which were out of my hands and against my wishes at the time. That's another can of worms and a piece of my own history. On the metabolism issue however, if you have a listen to the podcast, a Strala regular inquired about her boost in metabolism and newly-acquired muscle mass that she has put on since her regularity at the studio. Confirmed by an actual doctor at the talk, another Strala regular: Added muscle mass does increase metabolic rate. So it all depends on how you practice. Yoga has massive benefits when you practice with ease.

Who is your guru?

The scandals, the B.S., and the people messing up the raw power of human potential, all remind me of my upbringing in the Catholic Church, where I learned my most valuable lesson in life: just because someone says they are in charge, doesn't mean they necessarily know what they are talking about and have good intentions. Trust yourself, pay attention, and trust yourself.

At Strala, we talk with new visitors every day who come to us because they hear we "take it easy" and "don't push or force people into positions" and "aren't guru-based." And it's true, we base our practice and guiding on moving with ease, listening to your own body, mind, and internal guide. Looking inward for the answers. Sensitizing your body and mind to find your own best way to health. And I'd love to see the approach of easy-going yoga spread into other styles and schools.

Millions of people are waking up, stepping away from harsh teachers, false gurus, and beginning to realizing yoga is not about the pose and the shape you can make with your body. Yoga is not about the history of yoga. Yoga is not about being in a sacred community of the initiated few. Yoga is about uniting inward which takes place in the present, not the past, in each and every moment. It's a different experience for each individual, but connects us all, allowing us to tap into our powerful ability to become sensitized, heal, and live with compassion for ourselves, others, and our world. The study of history is interesting, but it is only study, not experience, and not practice.

The world needs yoga. This stuff is powerful and intense. It has the power to harm when held tightly, studied without practice, and posed rigidly. Done right, it also has the ability to heal and cure.