One day in 1943, Dr. Robert Oppenheimer, known to many as the "father of the atomic bomb," made a mundane request.

According to an interoffice memorandum sent on behalf of the lead physicist of the Manhattan Project, Oppenheimer asked for a coat rack to be installed in his office. Shortly after the first request, Oppenheimer's office sent another memo to this effect: “Thank you for the coat rack you installed this morning, but I still need a nail for my hat." 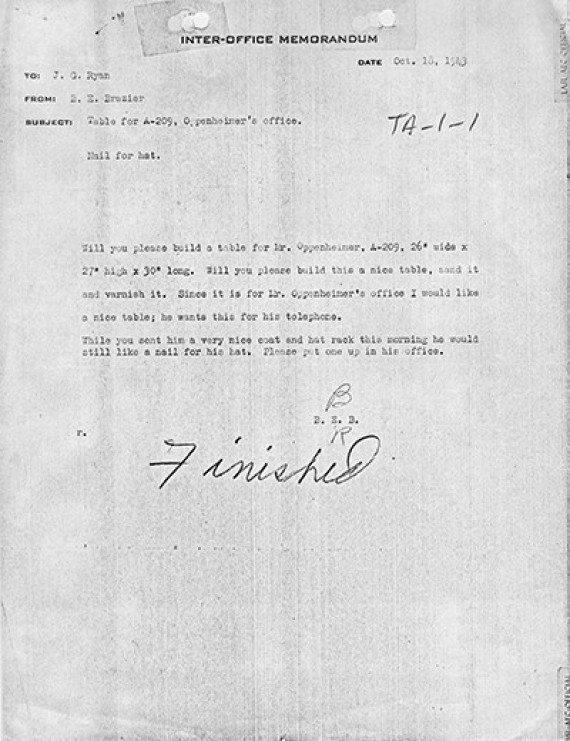 The exchange ends there, presumably leading to a nail being installed in Oppenheimer's 1940s office. It's a banal moment in a long line of controversial and sometimes regrettable events attached to the biography of the late American figure. But it's the exact moment that inspired a San Francisco-based art collective to embark upon a nuclear-inspired project, titled "Forging a Nail."

That collective is FutureFarmers, made up of individual artists, scientists, designers, architects and engineers who work together to create a collaborative environment for learning and sharing each other's perspectives. "FutureFarmers is a group of diverse practitioners aligned through an interest in making work that is relevant to the time and place surrounding us," the collective writes online. "We use various media to create work that has the potential to destabilize logics of 'certainty.'"

This often involves deconstructing policies surrounding food, transportation, farming and other systems that govern the way we interact with our planet. For "The Reverse Ark," the team built a temporary school in Baltimore using reclaimed materials, transforming salvaged wood and fabric into the building blocks of not only a building-turned-ark, but of the curriculum of teaching itself. In "Soil Kitchen," the group explored the post-industrial landscape of Philadelphia by turning an abandoned building into a windmill-powered architectural intervention. Philly residents were encouraged to bring soil samples to the newly transformed workshop space, "literally taking matters [of a green future] into one's hands." 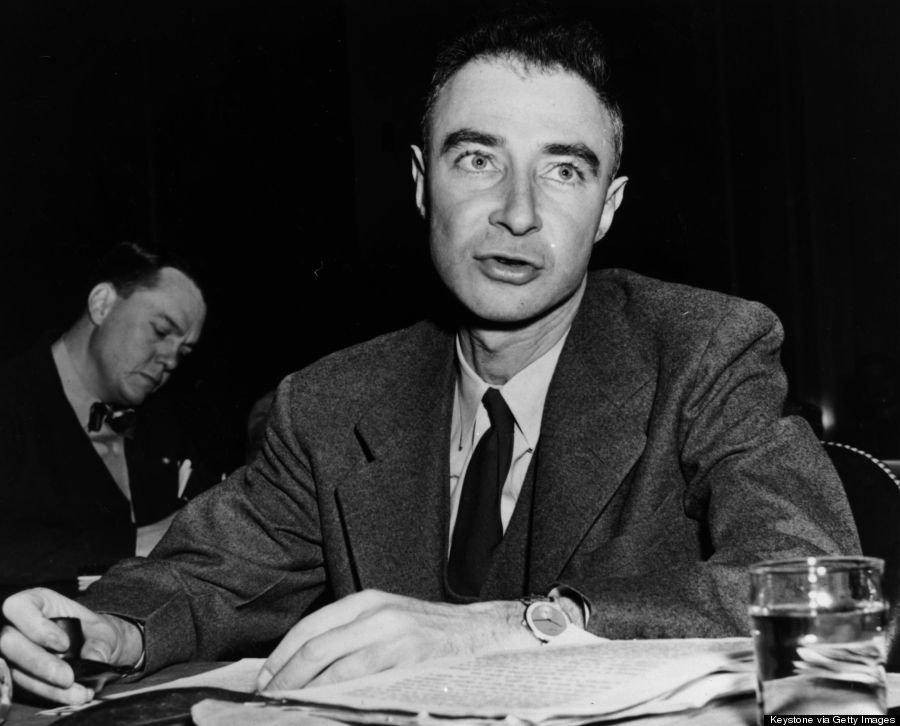 "Forging the Nail" takes place in Santa Fe, not far from the Los Alamos Historical Museum, where the artists and scientists of FutureFarmers found the seemingly innocent Oppenheimer memos. Imagined for SITElines, this summer's biennial dedicated to North and South American artists, the project involves recreating that simple but necessary nail that made its way into nuclear history.

"The persistence and specificity of this request for a nail for Mr. Oppenheimer’s hat inspired us to hesitate in this peculiar moment," FutureFarmers explained to HuffPost. "To think about New Mexico’s complex nuclear history as it relates to land use, resource extraction and the breadth of decisions that were made within the Manhattan Project."

The collective recreated the nail in three versions. The deliberately chosen materials for the project mine "the history of tool making from the pre-historic use of meteorites as tools to the material by-products of such events as the testing of the atomic bomb." The first nail is made from a meteorite found in Canyon Diablo, Arizona, the second through a process of casting 1943 steel pennies, and the third by fusing Trinitite, the glassy residue left on the desert floor in New Mexico after the plutonium-based Trinity nuclear bomb test in 1945. 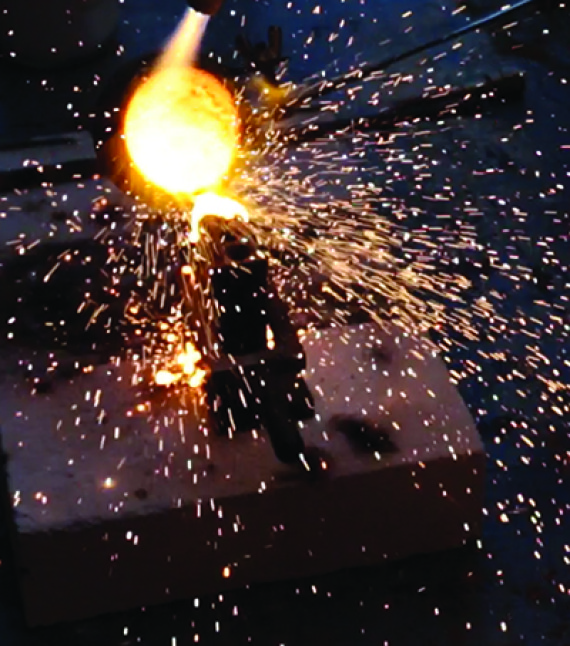 Futurefarmers, Forging a Nail (from a meteorite), 2014. Video still by Jin Zhu / Futurefarmers.

From otherworldly metals to mass-produced steel to mineral novelty, the bits of military industrial complex past represent a system we as citizens may not actively participate in, but certainly uphold.

"I think what we are asking people to do is realize that they DO participate already in these massive projects such as the Manhattan Project or the current military industrial complex," FutureFarmers explained. "In our research for the project we found one study that quantified the cost of the making of the atomic bomb and related it to each citizen of the United States. It stated that each citizen contributed 10 cents to the project. So by virtue of participating in the compulsory tax systems we are participating. This project asks us to question our participation."

In deconstructing nuclear history, FutureFarmers have illuminated one enigmatic nail -- a visual representation of sifting through knowledge. "Robert Oppenheimer becomes a symbol of our questioning this human desire to learn and 'know,'" said the artists. "He also symbolizes the condition of regret or sitting with the consequences of such a mission to learn. After the project he had quite a different outlook on what he had been doing. But he was not allowed to publicly question what happened and I think he suffered heavily for this."

"Forging the Nail" will be on view at the SITElines biennial, "Unsettled Landscapes," which begins on July 20 and runs until January 2015 at SITE Santa Fe. FutureFarmers Amy Franceschini, Michael Swaine, Dan Allende and Erika Renedo Illarregi recently ended their 10-day presence at SITE, but you can learn more about the collective here.