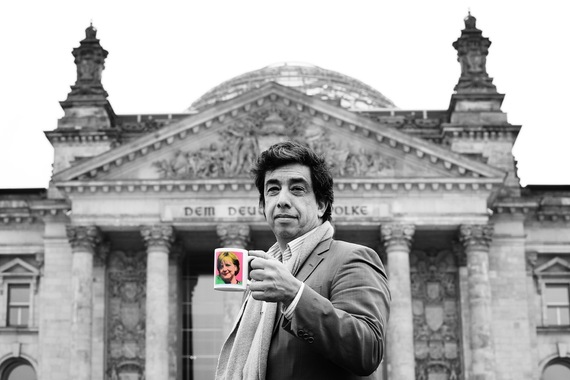 Fernando Morales-de la Cruz, Founder CAFÉ FOR CHANGE, asks: Madam Chancellor, how many cents of every cup of coffee you will serve at the G7 summit will help eradicate poverty in coffee growing regions? I hope @10CentsPerCup. Less than one cent per cup, as it has been, is exploitative!

The German Chancellor Angela Merkel will this week host the G7 leaders in Schloss Elmau for what could turn out to be a decisive cup of coffee for the more than 250 million people in coffee growing nations whose livelihood depends -directly or indirectly- on the production of coffee. Most of them live in poverty while the coffee industry, with US $175 billion in global consumption value per year, generates tens of billions in added value, taxes and profits for the G7 nations annually.

The German G7 presidency has put sustainability of the supply chain and insurance for developing nations against the consequences of climate change on the agenda of the G7. Chancellor Merkel said recently at a G7 preparatory meeting with labor organizations: "we cannot pretend that working conditions in the countries we buy supplies from have nothing to do with us"

The citizens of G7 & EU drink together nearly 1.5 billion cups of coffee every day. Those who produce the coffee, with great sacrifice and little in return, are not invited to these decisive G7 coffee dates. They will receive as payment for their coffee beans less than a couple cents from every cup of coffee drank by G7 & EU leaders and by the hundreds of journalists attending the summit.

Whatever is agreed at the G7 coffee dates with Merkel will have a major impact in the EU-CELAC "partnership" meeting to be held in Brussels on June 10th and 11th and on the lives of coffee farmers, they are the weakest link in the supply chain. The outcome could be a watershed moment, until now both the G7 and EU have shown little interest in real shared value and prefer to overlook the human and social sides of "sustainability". They both support inefficient aid programs and "Fair Trade" systems that will never eradicate poverty. This can only be done by CHANGING THE EQUATION OF COFFEE or of any other product.

As I wrote recently in The Guardian: "If European politicians and consumers want to eradicate poverty, they should pay a compensation of @10CentsPerCup to coffee-producing regions". The initiative @10CentsPerCup of coffee should be adopted by coffee shops, restaurants, hotels and institutions in all developed nations and by all coffee lovers who want to help eradicate the unacceptable poverty in coffee. If you love coffee... you can help eradicate poverty. Sustainability is about REAL Shared Value along the supply chain.

The supply chain and the shared value of every cup of coffee drank by G7/EU leaders is irrefutable evidence of an exploitative business model that perpetuates the poverty of coffee producers and keeps the lion's share of the benefits, taxes and profits in G7/EU nations. Germany for example has since the XVIII century had an anachronistic coffee tax, -similar to the one that provoked the Boston Tea Party-. It collects more than a billion euro per year, taxing roasted coffee at a rate of €2.19 per kg. and instant coffee at €4.78 per kg. The German coffee tax is an example of the lack of partnership and unacceptable "shared value". It can be called a colonial style tax on coffee
.
Today, even if the coffee industry is booming in G7 and EU nations, less than one cent of every cup of coffee they consume helps eradicate poverty and bring economic development to the coffee producing regions. Sadly, this is also true of the coffee consumed at the Bundeskanzleramt, the White House, at 10 Downing Street, at the Elysee Palace, at the EU Commission and EU Council, the same is true in all the other seats of power. This is an appalling reality that must be changed immediately by G7 & EU leaders as a first step to demonstrating that they are seriously committed to partnership -as defined by the dictionary- and to the achievement of the Sustainable Development Goals, as they claim they are with all their talk about Sustainability, Partnership, "the European Year of Development" and their "aid" development programs.

I am creating CAFÉ FOR CHANGE and @10CentsPerCup because it is high time to CHANGE THE EQUATION OF COFFEE to solve the structural problems that the politicians and the largest players in the coffee industry have been ignoring for decades as if the poverty and exploitation of their suppliers was not their problem or responsibility, even if their work and sacrifice helps them generate tens of billions in profits and taxes in G7 and EU nations.

Madam Chancellor, how many cents of every cup of coffee you will serve at G7 will help eradicate poverty in coffee growing regions? I hope, from now on, @10CentsPerCup.

To PM Abe, PM Cameron, PM Harper, President Hollande, President Juncker, Chancellor Merkel, President Obama, PM Renzi and President Tusk, I ask that: If you love coffee, you help eradicate poverty with @10CentsPerCup and supporting the creation of comprehensive insurance for the more than US$60 billion in coffee plantations and all coffee farm workers. The present business model in coffee, as in other important products for your trading partners, is exploitative!

Coffee lovers be part of this change by joining www.CafeForChange.org. You can follow us on www.Facebook.com/CafeForChange or on twitter @CAFEFORCHANGE.